Asked during a nearly two-hour exclusive interview last week at his golf club here in northern New Jersey, where he has been living and working for the past several months, if he runs in 2024 whether he would rather face Biden or Vice President Kamala Harris, Trump told Breitbart News he thinks Biden is not up to the job. Even so, he was not sure if he does decide to run in 2024 whether he would face Biden or Harris—or perhaps someone else the Democrats would put forward.

“I don’t think you’ll face Biden,” Trump said. “Biden is not an old man, by the way, but there’s something wrong. But he is not an old man—he’s going to be 79; that is not old. I know people that are much older than that, and they’re as sharp as they were 40 years ago. Biden is not an old person. They talk about age. If you’re in your 70s or even your 80s, I know so many people even in their 90s, like Bernie Marcus of Home Depot and so many others; they’re in their 90s and sharp as can be. But something is wrong. Something is going wrong there. I don’t like to predict that far forward. It’s such a long time, and I don’t know—things are happening left and right.”

Biden’s approval rating is sinking nationally and in key states from coast to coast, dropping to the lowest levels of his presidency so far in most recent surveys. That sinking approval rating—and rising disapproval—comes amid a series of crises most notably in his failed withdrawal from Afghanistan but also in his mishandling of the coronavirus pandemic, his open borders policies leading to record surges in migration across the U.S. border with Mexico, and a flagging economy that is seeing soaring energy prices and inflation across the board on everyday household products. Polling out this week also shows a solid majority of Americans think Biden’s withdrawal from Afghanistan was a failure and that a solid majority of Americans similarly blame Biden personally for it.

Asked about Biden’s unwillingness at the beginning of his botched withdrawal of U.S. forces from Afghanistan to take phone calls from foreign leaders—reports poured in that leaders from Europe frantically tried to no avail to reach Biden in the immediate aftermath of the Taliban overtaking Kabul—Trump said Biden was likely not in the mood to do his job.

“I would imagine Biden was not in a mood to take phone calls at that point because he was getting hammered,” Trump said. 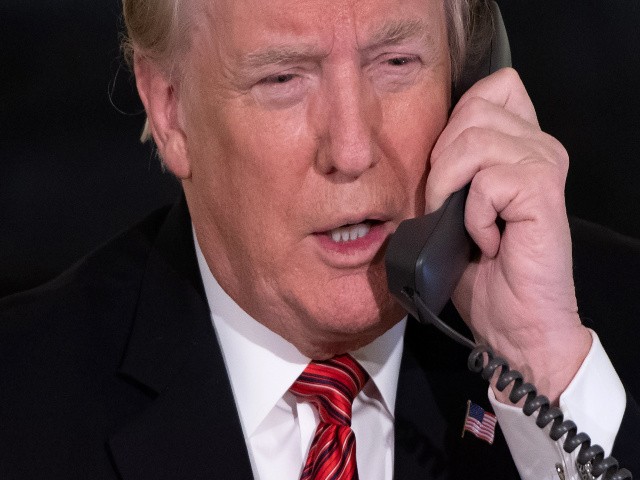 US President Donald Trump speaks on the telephone as he answers calls from people calling into the NORAD Santa tracker phone line in the State Dining Room of the White House in Washington, DC, on December 24, 2018 (Photo by SAUL LOEB / AFP) (Photo credit should read SAUL LOEB/AFP via Getty Images).

Trump also ripped former Afghan President Ashraf Ghani, who fled the country as the Taliban encroached on Kabul in mid-August, as corrupt and inept.

“I’ve always said Ghani was a crook and Ghani had total control over the U.S. Senate and to a lesser extent the House,” Trump said. “That was his power. Once it became obvious we were leaving, I always said he would leave just prior to us, and I also said probably he’d take whatever he could take, and he took a lot of money. But Ghani was a total crook. He was a bullshit artist. He had a great line on bullshit, even when I met him: ‘Oh, thank you, Mr. President.’ Thank you for what? I didn’t want to be here in the first place. But Ghani left”: 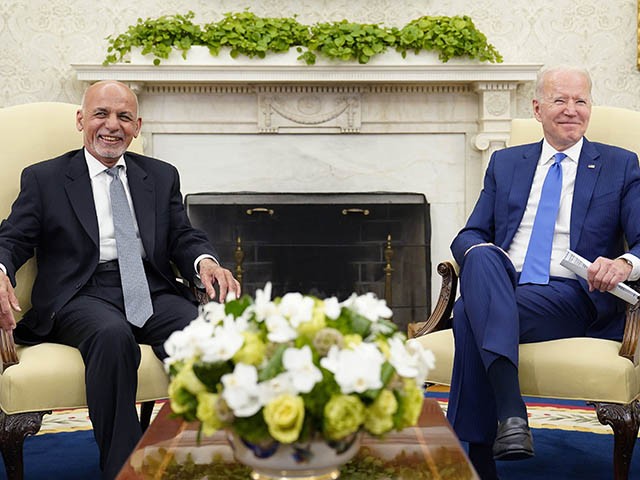 Interestingly, this week, a transcript and audio recording of one of Biden’s last phone calls with Ghani before the Taliban took over leaked out.    It showed Biden caring more about the “perception” of which side was winning rather than who was actually winning. The explosive transcript, according to Reuters, shows Biden pressing Ghani to present a false picture to the world of the Taliban not winning.

“There is a need, whether it is true or not, there is a need to project a different picture,” Biden reportedly told Ghani in the 14-minute phone call on July 23, less than a month before Ghani’s government fell and he fled the country.

Trump, in his interview with Breitbart News, also said the now fallen Afghan government’s military was not fighting for their country or a cause—but instead for a paycheck—something he said led to their not being able to stop the Taliban.

“The soldiers were among the highest-paid soldiers in the world. You know who paid them? The U.S. taxpayer,” Trump said. “When [now-former Secretary of Defense James] Mattis used to come up to me and say, ‘Sir, they’re fighting for the country,’ I would say, ‘No they’re fighting for a paycheck.’ That’s why we had so much of the blue on green and green on blue. We had a lot of that, the shooting of our own soldiers; we had more than we’ve ever had. These were highly paid people, and that’s why they were doing it. Once the payments were going to stop, once we were leaving, they basically were going to stop fighting. They went to the other side with our equipment.”

Asked about Harris—and her decision in the first week of this crisis to abscond to Vietnam and other Asian countries on a foreign trip for several days while Biden was twisting in the wind—Trump said that he does not blame her for abandoning Biden: 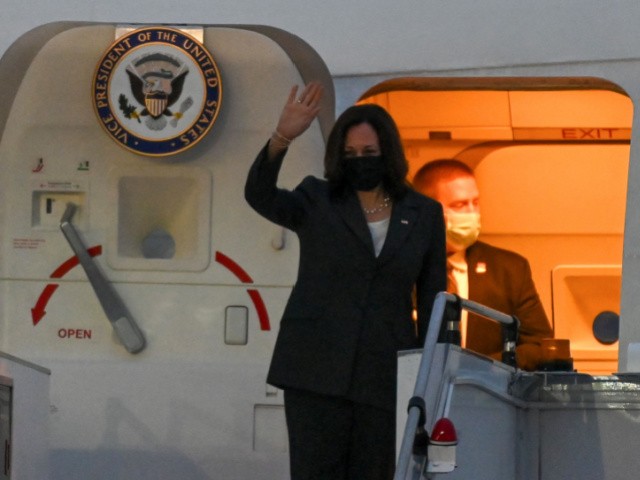 US Vice President Kamala Harris waves as she departs from Paya Lebar Air Base in Singapore on August 24, 2021 (Photo by Roslan Rahman / AFP) (Photo by ROSLAN RAHMAN/AFP via Getty Images).

Trump said that Harris—whose net approval rating according to NBC News, is by far the lowest any vice president has had in the first year all the way back to Al Gore in the 1990s—is not doing well in the job.

VP Harris has lowest feeling thermometer of any first year VP going back to Gore in 1993 … with an unprecedented “very negative” rating on @NBCNews survey tracking. pic.twitter.com/Ii3AlR5EZ2

Trump also said Harris’s handling of the border crisis has been a “disaster,” adding, though, that the border is “looking great” compared to Biden’s mishandling of Afghanistan.

“If they gave her the border, which supposedly they did, that’s a disaster,” Trump said. “The border is a disaster. The border is looking great now because compared to Afghanistan, the border is being well-run. But it’s the worst border we’ve ever had, and I gave you the best.”

Trump also said that “fortunately,” however, the U.S. Supreme Court upheld his administration’s policy of the Migrant Protection Protocols forcing Biden to reinstitute the Remain in Mexico plan—something he said is “actually a favor to the Biden administration because it will make them look better.”

“It’s incredible. By us winning, it’s a favor to them because the news in the coming year won’t be as bad as it would have been otherwise,” Trump said, referring to the Supreme Court case regarding litigation that Texas and Missouri brought against the Biden administration’s border policies. “But it’s not easy to get, as I understand it, and it’s great news it was just upheld by the Supreme Court.”