Former President Donald Trump leads President Joe Biden in a hypothetical 2024 matchup, a  survey shows. The revelation follows Biden’s botched withdrawal from Afghanistan and divisive rhetoric against unvaccinated Americans as his approval rating tanks to historical lows across the board.

The findings are part of the data provided in September’s McLaughlin & Associates survey. It asked, “Now, if the 2024 Presidential election were held today, which one of the following best describes how you would vote in the general election for President between Donald Trump, the Republican candidate and Joe Biden, the Democrat candidate, for whom would you vote?”

The survey also asked respondents if they agreed with the following statement: “I used to dislike Trump’s aggressive, confrontational style, but now that I see how weak Biden was in dealing with the Taliban in Afghanistan, I’m thinking maybe Trump wasn’t so bad.”

A majority, or 52 percent, said they agree, while 44 percent said they disagree. Overall, 58 percent say Biden surrendered Afghanistan to the “same Taliban group who helped the terrorists that attacked America on 9/11.”

The survey presented a similar agree/disagree statement reading, “It takes a tough man to be a good president. When I see how weak Biden is, I’m coming to appreciate Trump more and I’m thinking we need a bit more of Trump’s toughness right now.”

Again, a majority, or 56 percent, agree with that statement, compared to 40 percent who do not. The survey also found 60 percent agreeing with the statement that, under Trump, inflation was low, there was less immigration, lower gas prices, and less crime prior to George Floyd’s murder. 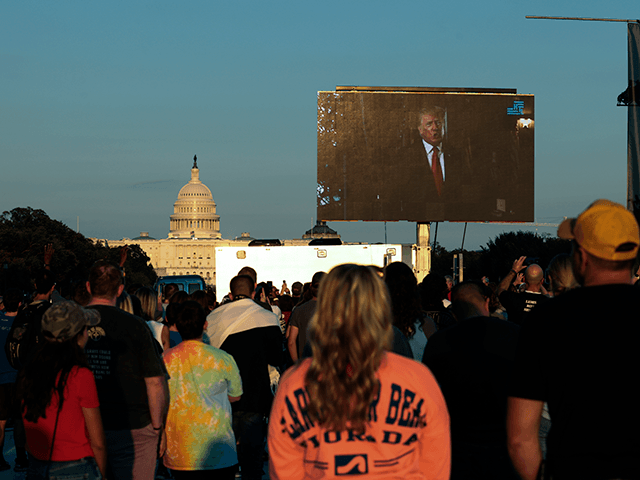 Attendees watch as a video message from former U.S. President Donald Trump plays during a “Let Us Worship” prayer service on the National Mall on September 11, 2021 in Washington, DC. (Anna Moneymaker/Getty Images)

Meanwhile, Biden’s approval rating has continued to crater in the first year of his presidency, hitting record lows.