A National Firearms Study examining gun purchases from the beginning of 2019 shows nearly half of first-time gun buyers are women.

The Wall Street Journal reported the study, noting it shows that approximately “3.5 million women became new gun owners from January 2019 through April of this year.” The number of male first-time gun buyers came in at approximately 4 million, putting the divide between male and female gun purchasers at nearly 50/50. 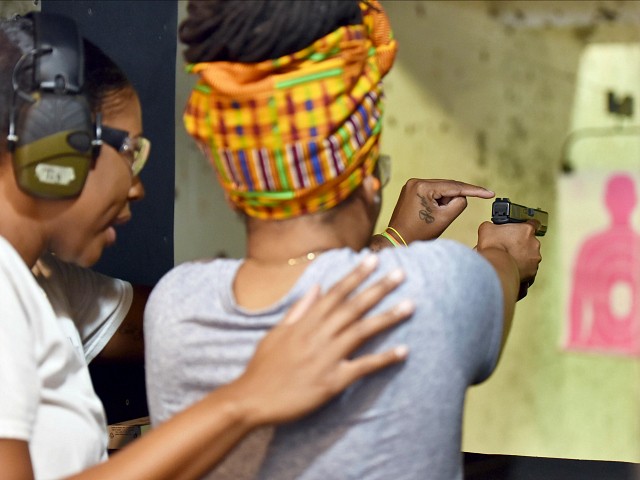 In this May 27, 2017, photo, Marchelle Tigner, a firearms instructor, teaches a student how to shoot a gun during a class in Lawrenceville, Ga. (AP Photo/Lisa Marie Pane)

The surge in gun purchases and the changing demographics of gun buyers occurred during a time of civil unrest, “Defund the Police” protests, and Chinese coronavirus shutdowns and restrictions.

According to the WSJ, the surge in gun purchases also coincided with the #MeToo movement, and that translated into more women buying guns.

After seeing women coming forward with stories of sexual assault and harassment as part of the #MeToo movement, Wendy Hauffen, chief executive of the gun-rights advocacy group San Diego Gun Owners, said she decided to found NotMeSD in 2019 to combat sexual assault and domestic violence through more women carrying firearms. About 400 women have gone through the program which pairs them with women mentors who guide them in purchasing a gun and training.

The WSJ highlighted the story of 39-year-old Kanisha Johnson, who joined NotMeSD then bought a Glock 9mm for self-defense earlier this year. Johnson was nearly killed after being shot by her children’s father and now says, “If any type of situation like that ever happens again, I just want to be better protected.”