Alexandria Ayala, a member of the Palm Beach County School Board, was caught partying maskless over the weekend, despite efforts to defy Gov. Ron DeSantis (R-FL) by forcing children to wear masks in school.

A photo shows Ayala, who represents District 2, smiling gleefully alongside others at the Business Development Board of Palm Beach County’s 38th annual gala over the weekend:

Palm Beach County school board has defied Gov. DeSantis and implemented a mask mandate. 4th from the left, in blue, is Alexandria Ayala who pushed forced masking the hardest. For your kids, not for her, obviously. https://t.co/gVab1YUUTx pic.twitter.com/4unHR6WpK6

The Palm Beach County School Board has given the state trouble over the governor’s ban on forced mask mandates. In August, the school board voted to change the rules, preventing parents from opting their children out of wearing a face covering in schools.

“The forced masking of schoolchildren infringes upon parents’ rights to make health and educational decisions for their own children,” DeSantis’s press secretary Christina Pushaw said in a statement at the time. 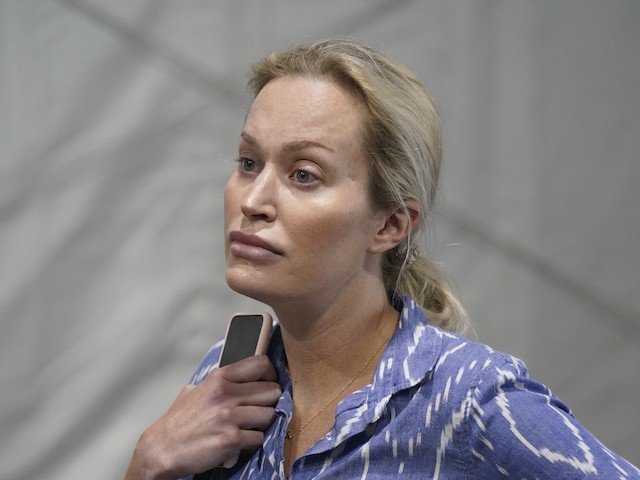 “No politician is above the law, even the Palm Beach County school board members,” she continued, calling the school board’s decision “disappointing.”

Notably, Ayala celebrated in August after a judge struck down DeSantis’s ban.

“Win for student/teacher safety! This ruling affirms that we have constitutional rights as board members to implement mask policies,” she said. “@SecCardona response to my letter today assures that the Admin has our backs.”

“I remain committed to keeping schools safe,” she added at the time:

Win for student/teacher safety! This ruling affirms that we have constitutional rights as board members to implement mask policies.@SecCardona response to my letter today assures that the Admin has our backs. I remain committed to keeping schools safe. https://t.co/S1tcw6IirN

Weeks later, the First District Court of Appeals granted a stay to the state’s request to reinstate the stay for a ban on school districts enforcing mask mandates.

Ayala, who once told citizens during a meeting that it is “a privilege to address your public officials and to be in this chamber,” is hardly the only official failing to abide by her own purported beliefs. San Francisco Mayor London Breed (D) came under fire last week after partying at the city’s Black Cat nightclub, maskless, despite the city’s mask rule requiring “almost everyone” to wear a mask in indoor public spaces with limited exceptions.

“We don’t need the fun police to come in and micromanage and tell us what we should or shouldn’t be doing,” Breed said of the criticisms.