Our Founding Fathers rightfully concluded state legislatures were best suited to determine the length of time, manner, and place of our elections.

But after Democrats took control of Congress, their first order of business was an assault on the integrity of our elections to ensure they remain in power in perpetuity. With their introduction of H.R.1 and S.1, Joe Biden, Nancy Pelosi, and Chuck Schumer sought to federalize elections, ban voter ID, and legalize the practice of ballot trafficking.

If the federal government succeeds in taking power away from “We the people,” then we’re no different than a banana republic, and we’ll never have confidence in our elections again.

When I testified in the U.S. Senate earlier this year against the Democrats’ scheme, I told them, “Should the act become law, I can tell you the sun won’t set in Indiana before we sue the federal government, and I’m sure other states will join.” Fortunately, the American people rejected the Democrats’ first attempt to hand control of elections to partisan bureaucrats as the Senate failed to pass the legislation.

But the battle is not over yet. 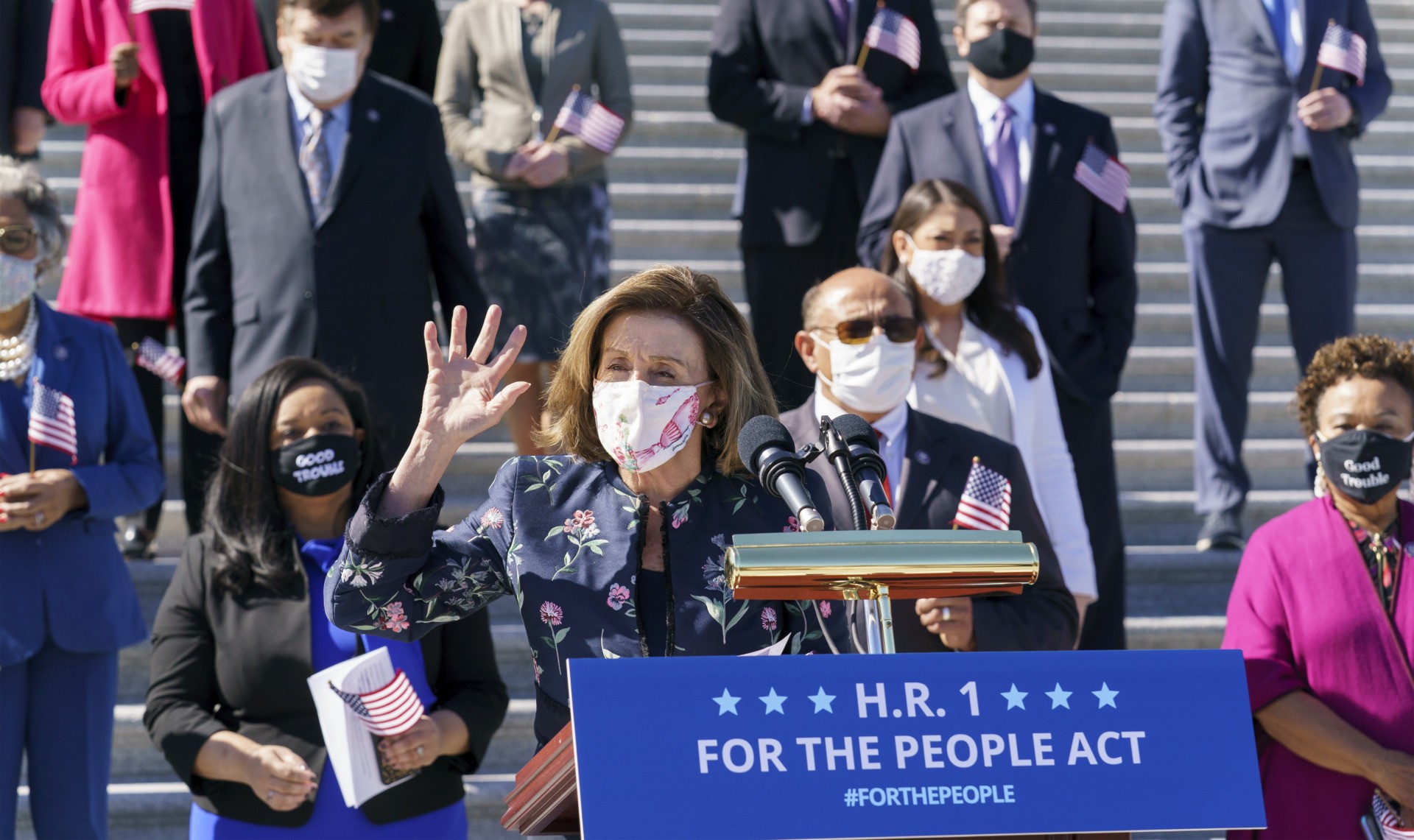 Speaker of the House Nancy Pelosi (D-CA) and the Democratic Caucus speak at a press conference on the steps of the Capitol regarding their elections reform bill, H.R. 1 “For the People Act of 2021,” on March 3, 2021. (AP Photo/J. Scott Applewhite)

Democrats, desperate to solidify their own power and expand the reach and size of the federal government, are proposing a similar scheme, dubbed H.R. 4., which would establish the U.S. Department of Justice (DOJ) as a national election czar dictating to states exactly how they must administer their elections and choosing which laws they liked and disliked. The Democrats’ goal is to use the DOJ to increase their chances of staying in power.

While Democrats called the measure a compromise, it is anything but. It is the same partisan election takeover but with a different label. Democrats somehow consider it racist and a form of voter suppression to ask voters to provide any form of identification. They have never bothered to explain how asking voters to provide proof of who they are is a form of bigotry, but what could be construed as racist is for Democrats to suggest that a certain group of people either do not have valid forms of ID or are not sophisticated enough to figure out how to obtain one.

Additionally, the Democrats also want to expand ballot trafficking, and they still want to take control away from states and local communities to hand them over to federal bureaucrats.

This new Democrat proposal is a clumsy and heavy-handed effort to circumvent Supreme Court decisions, state sovereignty, and the will of the people. Following the loss of two high-profile U.S. Supreme Court cases – Shelby County v. Holder and Brnovich v. DNC – Democrats won’t be deterred even after hearing their ideas are unconstitutional.

Fortunately, constitution-defending Attorneys General are prepared once again to defend the rule-of-law, free and fair elections, and the authority of states and localities to run their own elections.

I was proud to lead the efforts that stopped the Democrats’ first attempt at a federal takeover of elections, and I’m honored to champion that effort again as 23 Attorneys General have signed onto a letter I piloted urging Congress to reject this disastrous piece of legislation. 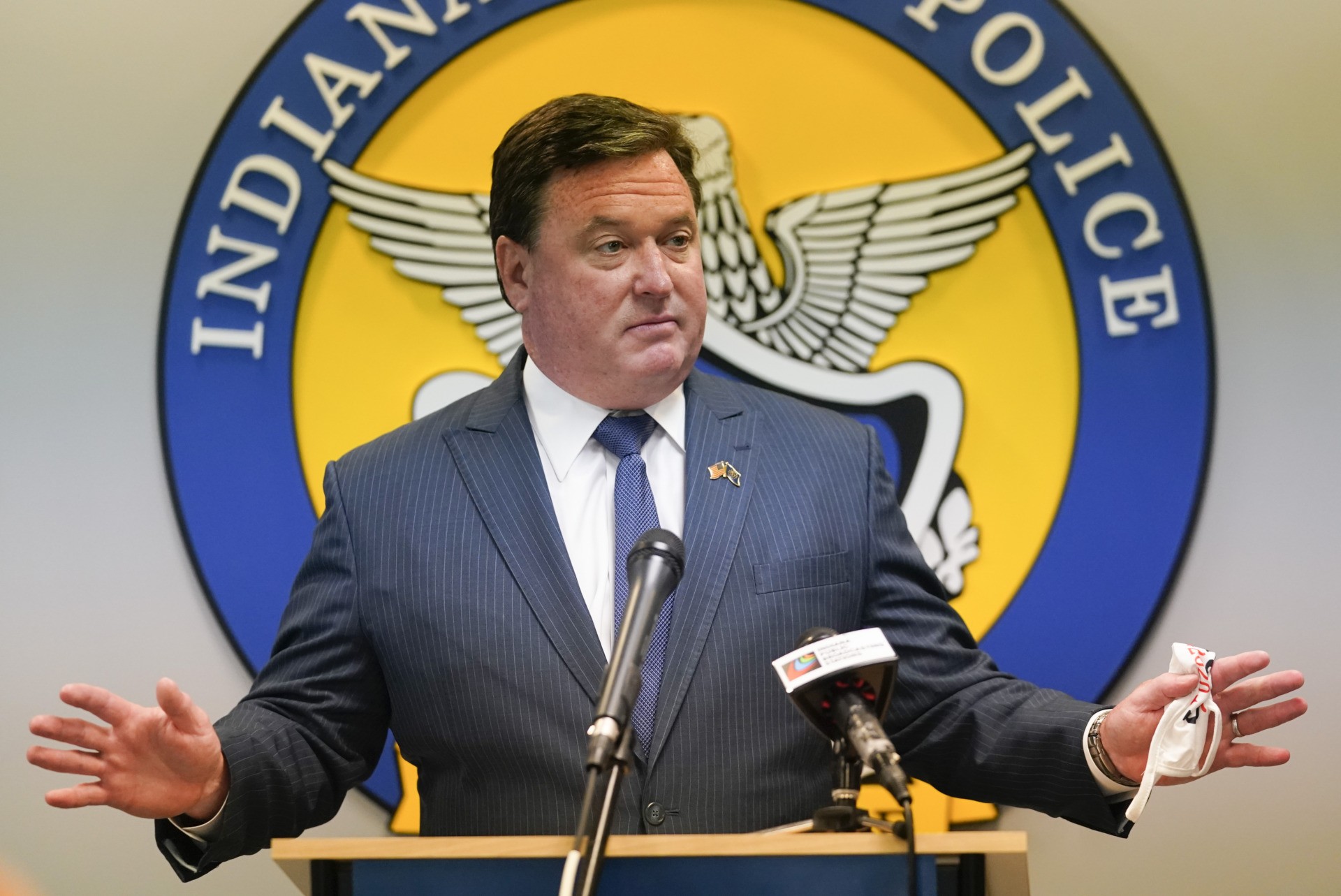 Todd Rokita speaks during a news conference on September 16, 2020, in Indianapolis, IN. (AP Photo/Darron Cummings)

This mission is core to who we are as a democratic republic: one that has free and fair elections and where the will of the people reigns supreme. This is why, when I served as Indiana’s Secretary of State, we implemented voter ID, making it harder to cheat and easier to vote. Since then, other states followed our lead, and Indiana’s voter participation numbers have continued to climb. Commonsense election security works and is widely supported, which is exactly what Democrats are seeking to undermine.

Joe Biden and congressional Democrats failed to sell their federal takeover of elections the first time around because Americans made their voices heard, and I believe Americans will reject this unconstitutional partisan power-grab again.

The Democrats didn’t design their so-called “John Lewis Voting Rights Advancement Act” in good faith to protect Americans’ votes or to expand voting access for minorities as they dishonestly claim.

They designed it for one reason, so that Democrats in Washington could federalize elections, take power away from the states, and make it easier to cheat.

I will gladly go to any court and any mountaintop with other Attorneys General to ensure we can have confidence in our elections again.

Todd Rokita is the 44th Attorney General of Indiana.