The report of the Maricopa County Forensic Election Audit of the 2020 election released at a public hearing of the Arizona State Senate chaired by Senate President Karen Fann (R-1) and Judiciary Committee Chairman Senator Warren Petersen (R-12) on Friday identified a number of significant election irregularities discovered during the audit.

Out of 3.4 million votes cast in Arizona in the November 3, 2020 presidential election, about 2.1 million were cast in Maricopa County. Of these, a little more than 1.9 million were early votes, either cast by mail or deposited in drop boxes.

Joe Biden was certified as the winner of Arizona’s 11 Electoral College votes over former President Donald Trump by Secretary of State Katie Hobbs (D-AZ) and Gov. Doug Ducey (R-AZ) on November 30, 2020 by a margin of 10,457 votes. According to those certified results, Biden received 1,672,143 votes in the state, while Trump received 1,661,686 votes. 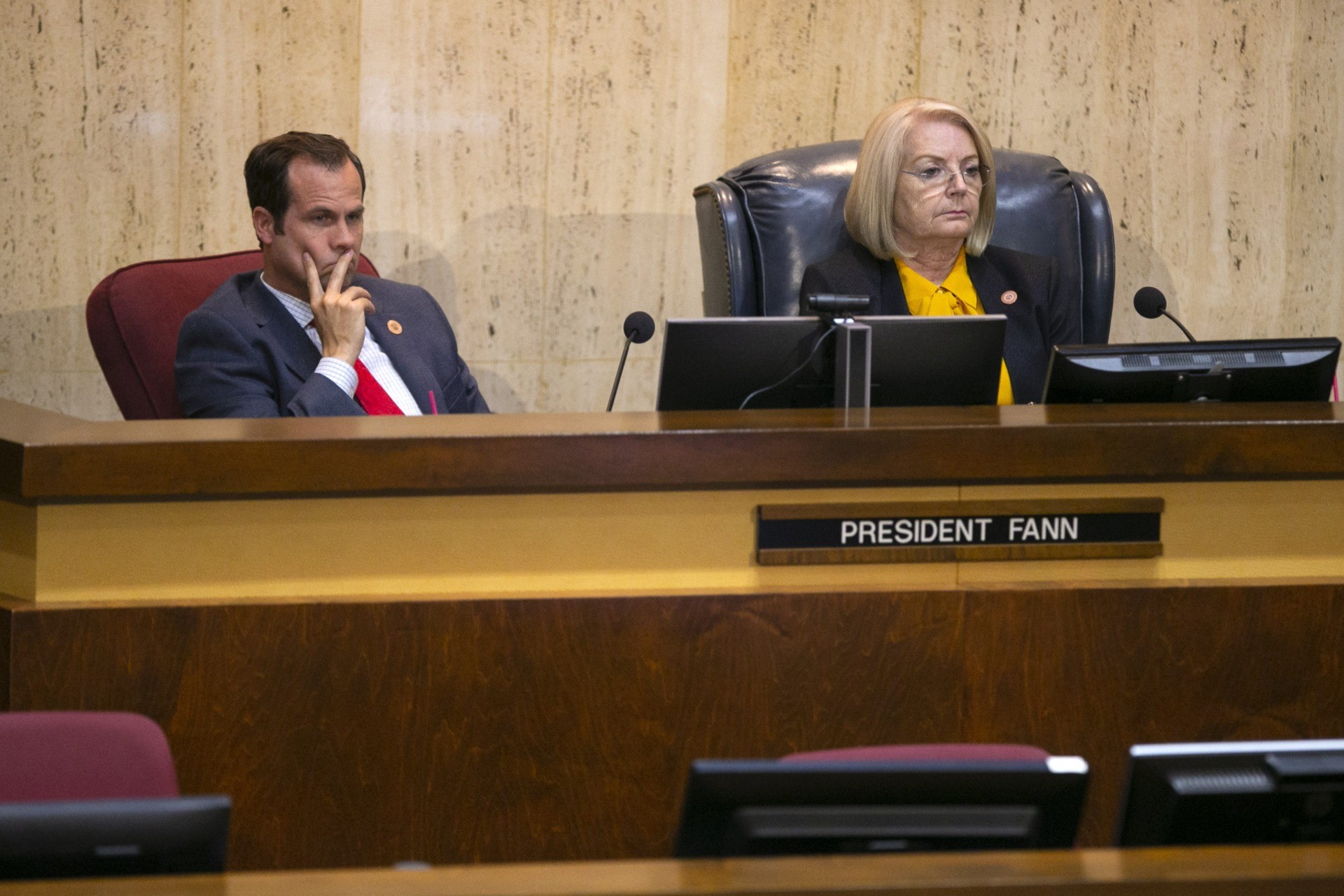 Senate President Karen Fann and Senate Judiciary Chairman Warren Petersen, the majority leader, listen during the presentation of the report on the election audit to Arizona lawmakers in the Senate chambers of the Arizona Capitol in Phoenix on Sept. 24, 2021. (David Wallace/The Republic via Imagn Content Services, LLC).

They have claimed these results confirm Biden “won” Arizona.

As Breitbart News reported, a draft of the executive summary, dated September 23, was leaked early Friday morning, and establishment media outlets focused on the statement in that leaked draft that, “there were no substantial differences between the hand count of the ballots provided and the official canvass results for the County.”              .

The results of the audit, however, actually raise more doubts about the legitimacy of more than 49,000 votes included in the final counts of both the forensic audit and the Maricopa County Official Canvass results, a number that is more than four times greater than Biden’s 10,457 vote certified margin of victory.

Of these more than 2 million votes counted, the report stated the results of the audit found that there were questions about 49,718 of these votes that had a critical, high, or medium “potential impact the finding may have had on the election.” 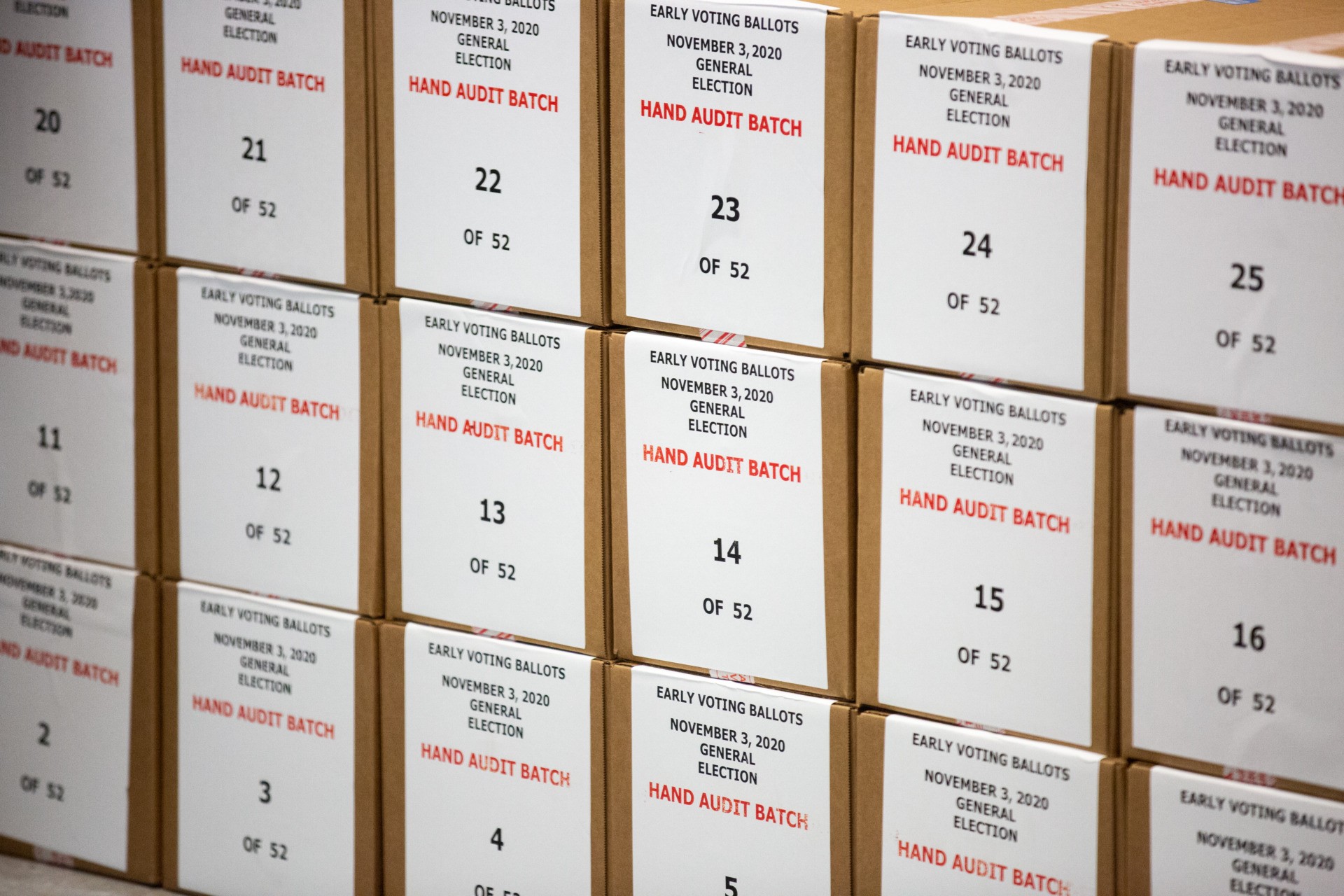 The audit was designed to be a comprehensive review of the results from the Maricopa County 2020 General Election to confirm the effectiveness of existing legislation in governing elections, and to provide additional insights on possible areas of legislative reform that could ensure an even greater level of integrity and accuracy in how elections are conducted.

“For this reason, the audit focused on four main areas of the election process: voter history, paper ballots, voting machines, and the certified results. These four areas enabled the audit team to focus on factors that impact elections in order to highlight areas of concern,” the report continued. (Emphasis added).

Here is a breakdown of those 49,718 questionable votes:

An additional 3,587 votes were in the “low impact” category across 14 findings.

Section 5.1 of Volume III of the report identified the ballot scoring methodology used to separate ballot findings into the four categories of severity as to their impact on the election results: critical, high, medium, or low:

Ballot related findings are scored based on the total number of potential ballots impacted by the finding. Based on the range in which this falls within, a Severity is assigned . . . In these circumstances a severity will still be assigned to the finding based on the potential impact the finding may have had on the election.

A separate report, Pattern Recognition of Early Voting Ballot (EVP) Return Envelope Images for Signature Presence Detection, was prepared by EchoMail, and presented to the panel by its lead investigator, Dr. Shiva Ayyadurai. The findings of that report included the following:

A third report on cybersecurity from a firm called CyFir, Digital Findings, was delivered by Ben Cotton. Key findings of that report included:

You can watch a recording of Friday’s Senate hearing on the audit report, as delivered by Doug Logan, president of Cyber Ninjas, the firm that led the investigation, Dr. Shiva Ayyadurai, and Ben Cotton, here.

In a statement released by the Save America PAC Friday morning, former President Trump praised the audit results as reported in a leaked early version of the report:

The Fake News is lying about the Arizona audit report! The leaked report conclusively shows there were enough fraudulent votes, mystery votes, and fake votes to change the outcome of the election 4 or 5 times over. The number includes 23,344 mail-in ballots, despite the person no longer living at that address. Phantom voters! The official canvass does not even match who voted, off by 11,592—more than the entire Presidential Election margin. Voters who voted in multiple counties totaled 10,342, and 2,382 ballots came from people who no longer lived in Maricopa County. There were also 2,592 “more duplicate ballots than original ballots.” Just those fraudulent ballots alone total 50,252, and is fraud many more times than the so-called margin of “victory,” which was only 10,457. In addition, election data appears to have been intentionally deleted, and ballot images were “corrupt or missing.” This is not even the whole state of Arizona, but only Maricopa County. It would only get worse!

There is fraud and cheating in Arizona and it must be criminally investigated! More is coming out in the hearing today.

As the hearing began on Friday afternoon, Trump added this statement:

CNN, New York Times, Washington Post, and other Lamestream Media are feeding large-scale misinformation to the public about the Arizona Audit. The Audit was a big win for democracy and a big win for us. Shows how corrupt the Election was. Arizona State Senate hearing going on now and the information about what took place is terrible—a bigger Scam even than anticipated!

Midway through the hearing, Trump sent a third email:

It is not even believable the dishonesty of the Fake News Media on the Arizona Audit results, which shows incomprehensible Fraud at an Election Changing level, many times more votes than is needed. The Fake News Media refuses to write the facts, thereby being complicit in the Crime of the Century. They are so dishonest, but Patriots know the truth! Arizona must immediately decertify their 2020 Presidential Election Results.

Saturday morning Trump sent out a fourth email that read, “44,000 Ballots the Left Wants You to Ignore,” and included an image of the “Finding Summary Table” included in Section 5.2 of the report, Maricopa County Forensic Audit, Volume III: Result Details.

The theme that Maricopa County refused to cooperate with the audit was highlighted by each presenter during the hearing.

“I’m very disappointed to see that Maricopa County refused to cooperate with us. Not only did they not cooperate with us, they even went so far as to sue us,” State Senate President Fann said at the beginning of the hearing.

What you have not seen and not heard is about the statutes that were broken, how chain of custody was not followed, how we had a number of issues, which is why people questioned the ballots and the election. So I ask that you please keep an open mind, I ask that you please listen to this, because the reality of this is that this is all about making sure your vote counts.

At the close of the hearing, it was clear the State Senate expected the Arizona Attorney General Mark Brnovich to follow up on the results of the report aggressively. Brnovich signaled his intent to do so even before Friday’s afternoon hearing began.

“I will take all necessary actions that are supported by the evidence and where I have legal authority,” Brnovich said in a tweet on Friday morning:

I will take all necessary actions that are supported by the evidence and where I have legal authority.

Arizonans deserve to have their votes accurately counted and protected. https://t.co/KZ8AHqyMmB

Judiciary Chairman Petersen identified eight key points at the close of the hearing:

“I look forward to working with the Attorney General,” Petersen concluded.

Fann also highlighted the follow up by the Attorney General.

“I have already transmitted a letter to our AG’s office with those reports. We are asking him to open up a formal investigation … perhaps get some of the missing things we were unable to get. I have every confidence he will be doing that,” Fann concluded.