President Joe Biden made a surprise trip to attend the Congressional baseball game on Wednesday night, even as his $1.5 trillion infrastructure bill hangs in balance.

Republicans could be heard audibly booing in the stadium while Democrats cheered as the president arrived at Nationals Stadium.  The annual game played by members of Congress is traditionally attended by staff of both parties.

Both cheers (from Dem side) and boos (from GOP side) as @potus introduced at Nationals ballpark at Congressional ballgame. pic.twitter.com/40RZvPH5hj

President Biden makes a surprise appearance at the annual Congressional Baseball Game. He played during his years in the Senate and was inducted into the game’s Hall of Fame earlier tonight. #NexstarDC pic.twitter.com/CfpU7AloeM

Biden entered the stadium during the second inning with the racing president mascots and embraced Speaker Nancy Pelosi (D-CA). 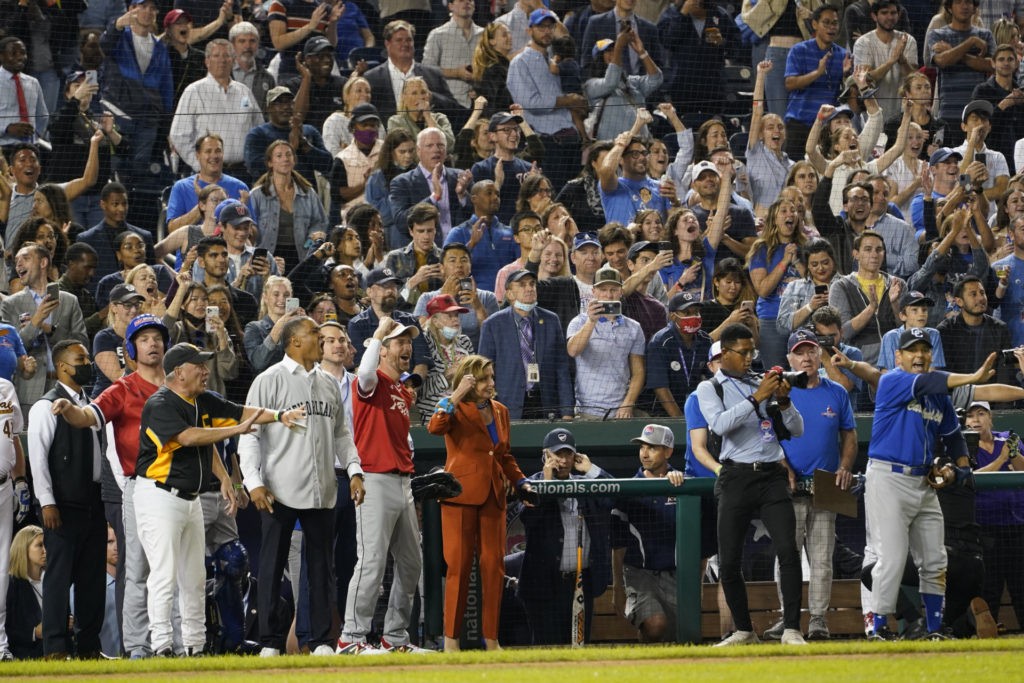 President Joe Biden talks on a mobile phone as he attends the Congressional baseball game at Nationals Park Wednesday, Sept. 29, 2021, in Washington. The annual baseball game between Congressional Republicans and Democrats raises money for charity. House Speaker Nancy Pelosi of Calif., cheers on the field in front of Biden. (AP Photo/Susan Walsh)

The 'racing presidents' and President Biden at the Congressional baseball game. pic.twitter.com/DvZysm0lWi

The president handed out ice cream bars during the game with the presidential seal.

Biden is handing out ice cream bars to ballplayers from both congressional teams. Dove bars with a presidential seal. pic.twitter.com/i3E4ikTxyl

Prior to the game, Biden met with Pelosi and Senate Majority Leader Chuck Schumer in the Oval Office to discuss the future of his agenda.

Pelosi scheduled a vote on the president’s $1.5 trillion infrastructure package for Thursday, even though the far-left wing of the Democrat party has threatened to boycott if it isn’t accompanied by a $3.5 trillion entitlement and tax hike package.

Biden continues meeting with Sens. Krysten Sinema (D-AZ) and Joe Manchin (D-WV) in an effort to break the logjam on the $3.5 trillion package, but so far they have resisted making a deal.

“While I am hopeful that common ground can be found that would result in another historic investment in our nation, I cannot – and will not – support trillions in spending or an all or nothing approach that ignores the brutal fiscal reality our nation faces,” Manchin wrote in a statement on Wednesday night.