President Joe Biden on Thursday will feature in another CNN town hall, his third with the ratings-challenged network in a little over six months. Anderson Cooper will be asking the questions at the Baltimore event in front of a special, hand-picked audience.

CNN announced the live broadcast production, which will air at 8 p.m. ET and last 90 minutes, is set down for a yet to be revealed venue.

Biden has already participated in two CNN town halls since taking office – one with anchor Anderson Cooper in February and another with Don Lemon in July.

The president is scheduled to travel to Pittsburgh the day prior to deliver remarks promoting his massive spending agenda and the public appearance comes at a critical time for his political aspirations.

Nolte: Far-left CNN just changed its polling methodology in order to ensure its polls are even faker than they were before. https://t.co/arYbghBPZb

Biden is meeting with lawmakers all this week to negotiate both aspects of his stalled proposals — a troubled economic package to expand social spending alongside a $1.2 trillion bipartisan infrastructure bill.

On Thursday, the day Biden takes part in the town hall, Vice President Kamala Harris will be campaigning for gubernatorial candidate Terry McAuliffe in nearby Virginia, a source familiar with Harris’ event told CNN.

Biden has limited time to wrangle Democrats behind a solution before he departs for a trip to Italy – his second international trip since becoming president – to attend the COP 26 Climate Change Conference in Glasgow, Scotland, and the Group of 20 (G20) summit. 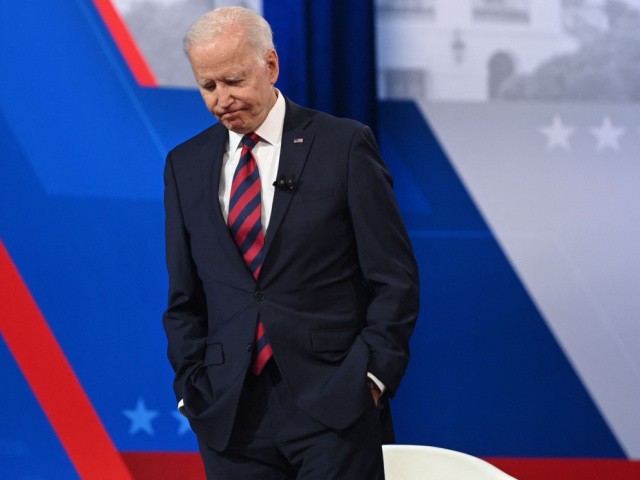 Biden will also travel to Scranton, Pa., on Wednesday to pitch his $4.7 trillion economic agenda.

He also told reporters Monday he would be having words with Sen. Joe Manchin, West Virginia Democrat, who has objected to the price tag of the sprawling economic proposals.

The president’s backers are hoping his Thursday appearance in Baltimore will engage more viewers than his previous efforts with CNN and deal with issues that resonant more with voters rather than alienate them.

Back in July he sparked fury when he talked about a “push to eliminate” 9mm pistols that have an ammunition capacity beyond that of which the left approves, as Breitbart News reported.

Biden said, “The idea you need a weapon that can have the ability to fire 20, 30, 40, 50, 120 shots from that weapon, whether it’s a 9mm pistol or whether it’s a rifle, is ridiculous. I’m continuing to push to eliminate the sale of those things.”

That night failed to shake up cable ratings as the left-leaning CNN and its tame guest languished in the shadows of Fox News and MSNBC for primetime hours.

The town hall, moderated by CNN anchor Don Lemon, garnered just a little more than half the amount of the total viewers Fox News had at the same time, finished third in ratings for the night, falling just behind MSNBC.