A new analysis of student test-score data found school districts with administrators hired to head “diversity and inclusion” programs are not only not shrinking achievement gaps, but may actually be serving to expand them.

“If [Chief Diversity Officers] CDOs are not accomplishing their stated goals, what is accomplished by creating these positions?” asked Jay Greene, Ph.D. and James Paul, authors of the report published at the Heritage Foundation on Tuesday.

The authors noted that while CDOs were initially seen only on college and university campuses, they have become more commonplace in K-12 school districts, and are particularly prevalent in 79 percent of those with 100,000 or more students.

They used data from the National Center for Education Statistics (NCES) to examine 554 school districts with at least 15,000 students, for a total of more than 22.5 million students enrolled as of 2017, which represented 44 percent of all students in public schools during that year.

The researchers then searched online to determine which districts employed CDOs or administrators charged with “diversity, equity, and inclusion.”

Of the 554 districts, 39 percent were found to have employed a CDO. Among school districts with 100,000 students or more, 79 percent had CDOs or an equivalent position.

The researchers found the prevalence of CDOs also varied based on whether a school district is in a “blue” or “red” state. Among districts in blue states with more than 15,000 students, 47 percent have CDOs, while 32 percent of the same size districts in red states have a similar position.

Greene and Paul also determined that, following their search of school district websites, the primary stated purpose of CDOs and equivalent positions is to shrink achievement gaps between predominantly white students and those from black and Hispanic backgrounds.

The stated primary purpose of many left-wing education reforms, including the most recent “Common Core State Standards,” has been to shrink the achievement gap. Despite implementation of these reforms throughout the nation, standardized test scores have shown the gap has not only not diminished, but has even grown worse.

Common Core has been a disaster. https://t.co/nmWkNSOuhF

“By creating a CDO position, office, and staff, districts can claim that they will be able to reduce or eliminate these disparities in outcomes,” Greene and Paul wrote. “If this claim were accurate, districts with CDOs should have smaller achievement gaps than districts that do not have CDOs, all else being equal.”

Using student test-score data from the Educational Opportunity Project at Stanford University, merged with data from school districts regarding whether they employ CDOs, the researchers examined the hypothesis that school districts with CDOs or an equivalent position are actually closing achievement gaps.

“Standardized test results show that achievement gaps are growing wider over time in districts with CDOs,” the authors found, however. 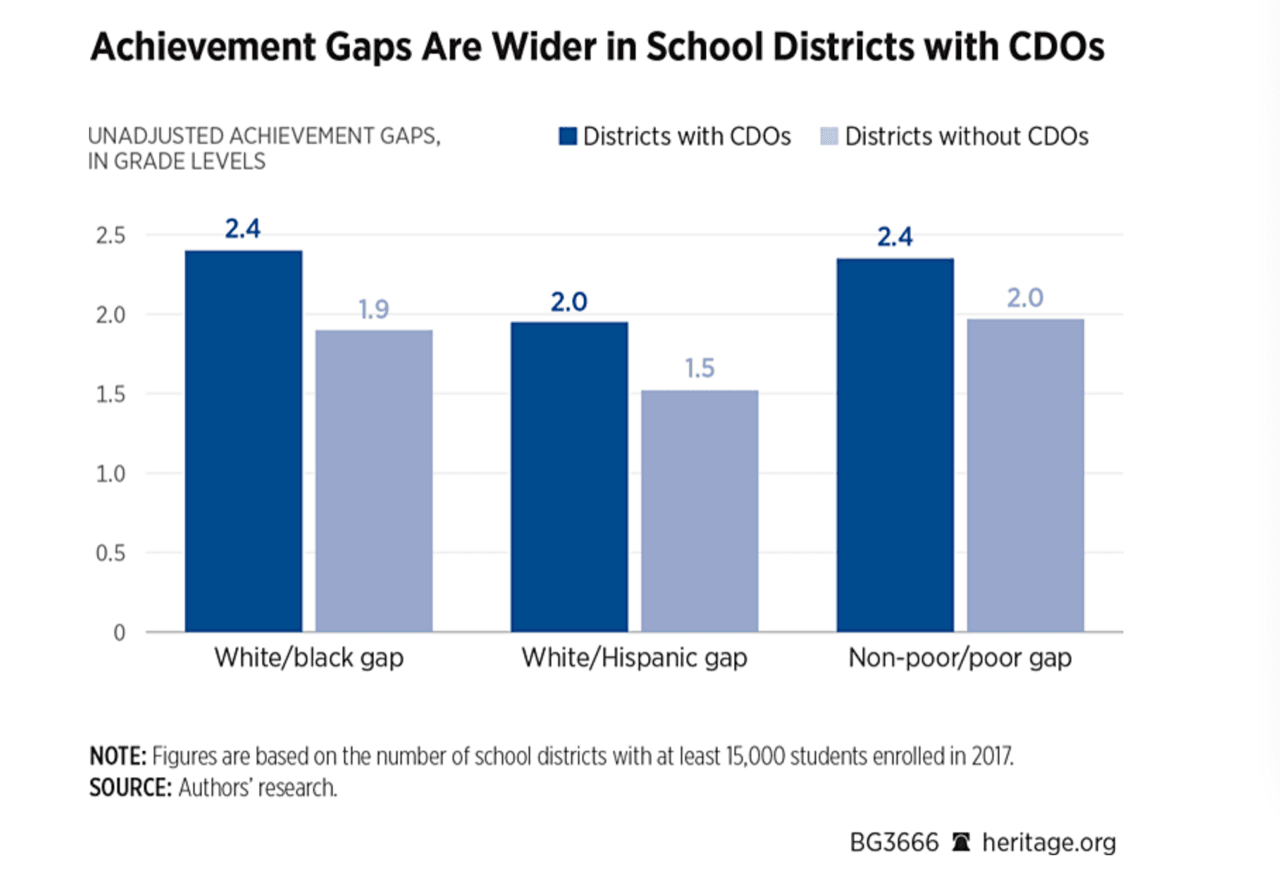 Even when other observed characteristics about school districts are controlled statistically, the negative relationship between a CDO position and achievement gaps remains.

Dr. Peggy Carr, Associate Commissioner, notes that the lowest performing students–those readers who struggle the most–have made no progress in reading since the first assessment almost 30 years ago. Learn more: https://t.co/EWajchXvIH#NAEPDay pic.twitter.com/9zanK5fPmv

“CDOs may be best understood as political activists who articulate and enforce an ideological orthodoxy within school districts,” Greene and Paul concluded.

“They help to mobilize and strengthen the political influence of one side,” they asserted. “The creation of CDOs tilts the political playing field against parent and teacher efforts to remove the radical ideology of critical race theory and other illiberal ideals from school curricula and practices.”