Migrant apprehensions in Mexico hit the highest number ever recorded in a single-month period in September, the latest available official data reveals.

Still, a record number of migrants managed to make it to the U.S southern border in September, the last month of the government’s 2021 fiscal year.

The result is that U.S. Customs and Border Protection (CBP) agents interdicted an unprecedented 1.7 million-plus migrants along the southern border in the 12-month period ending on September 30, known as the fiscal year.

Analysts have historically used apprehension data as a rough measure of migration flows to the U.S. The data does not account for illegal migrants who successfully make it into the United States.

Citing the most recent data released by the Mexican government late last month, Adam Isacson from the Washington Office on Latin America (WOLA) wrote on Twitter, “[Mexico] updated its official migration data today. In September, Mexico’s migration forces shattered their previous single-month record for apprehensions of migrants. 41,225 apprehensions last month, up from the previous high of 32,155 set in August.”

#Mexico updated its official migration data today. In September, Mexico's migration forces shattered their previous single-month record for apprehensions of migrants. 41,225 apprehensions last month, up from the previous high of 32,155 set in August.

Migrant arrests by Mexican authorities increased by nearly 30 percent from August to September.

It is unclear what Mexico is getting, if anything, for ramping up immigration enforcement. Republicans and some Latin American governments have blamed the border crisis on Biden’s lenient migration policies, saying they are incentivizing tens of thousands of global migrants, also known as extra-continentals, to make the journey to America.

Extra-continental is government jargon for migrants from regions far away from the U.S. southern border, including South America, the Caribbean, Africa, the Middle East, Asia, and Eastern Europe.

As a transit country for the growing number of global migrants, courtesy of Biden’s immigration measures, Mexico is in a position to demand immigration concessions from a U.S. administration reeling from falling poll numbers over its handling of the border crisis.

A growing wave of U.S.-bound global migrants, largely from the Caribbean and South America, is fueling record high migrant arrests in Mexico and the United States.

The rate was similar in the United States. Extra-continentals made up 36 percent of all 192,001 apprehensions along the U.S.-Mexico border for September, according to the latest official data released by President Joe Biden’s administration last month.

Terrorists linked to jihadi groups such as al-Qaeda have reportedly attempted to blend in with the high number of U.S -bound migrants who are allowed safe passage through Panama, where authorities vet those it encounters, and neighboring Costa Rica, the next stop on the land route to the U.S.

U.S. officials allege that the safe passage agreement between Panama and Costa Rica benefits the U.S. by warning America about migrants heading towards its border.

The political crisis created by the thousands of Haitian migrants who amassed under a makeshift camp in Del Rio, Texas, forced the Biden administration to publicly contend with the growing number of global migrants from across the Americas and beyond reaching the U.S.-Mexico border.

“We face a challenge that in many ways is unique with tremendous pressure from illegal migratory flows coming in different ways, different parts of the hemisphere,” Secretary of State Antony Blinken conceded last month. “We have to have a stronger regional approach to this challenge.” 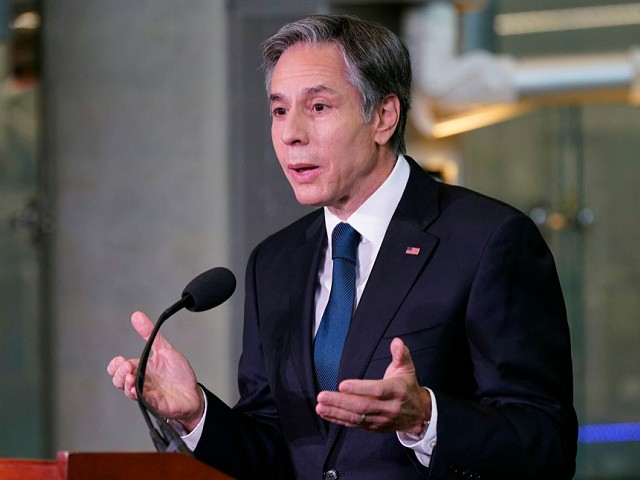 While Mexico and the NT region remain the traditional top drivers of United States migration trends in sheer numbers, the tally of global migrants encountered by American authorities along the U.S.-Mexico border continues to increase at a much higher pace.

Overall, CBP apprehensions saw a slight drop from August to September, the latest month for which data is available.

CBP officials encountered 192,001 migrants in September, over 17,000 fewer than the previous month (209,840). However, the figure still marks the highest September for interdictions since 2000.

A decrease in the detention of migrants from Mexico and the Northern Triangle drove the drop in total apprehensions from August to September.

In recent weeks, even members of Biden’s own administration and the Democrat-allied corporate media acknowledged that global migration had intensified the border crisis for the Biden administration, which is still struggling to solve the problem.

The number of apprehensions at the U.S. southern border remains high despite the Biden Administration’s continued use of the pandemic control protocol known as Title 42.

Although the measure, invoked by former President Donald Trump’s administration, allows immigration authorities to remove any migrant immediately, the Biden team has watered down the policy, allowing for exceptions.