The survey, taken October 26-28, 2021, among 1,578 registered voters, found that most Americans do not approve of Biden’s job performance in “any given area” — from the economy to immigration. In contrast, a majority approved of Trump’s handling of many of the same issues in January 2021.

For example, respondents gave Biden a 40 percent approval rating on the economy, 44 percent on stimulating jobs, 39 percent on fighting terrorism, 35 percent on immigration, 39 percent on foreign affairs, 42 percent on administering the government, 38 percent on dealing with violence and crime in the country, and 33 percent — his lowest — on handling Afghanistan.

The Biden administration reopened the outdoor detention area that once held 15,000 mostly Haitian migrants for processing and transport. https://t.co/zM5C9kzyCN

In contrast, 56 percent approved of Trump’s handling of the economy, 58 percent on stimulating jobs, 55 percent on fighting terrorism, 52 percent on immigration, 52 percent on foreign affairs, and 49 percent on administering the government. The only issue Biden scored higher on is “reacting to the coronavirus,” 50 percent to his predecessor’s 47 percent.

The survey also asked, “If the election for president were held today and were between Joe Biden and Donald Trump, who would you vote for?” 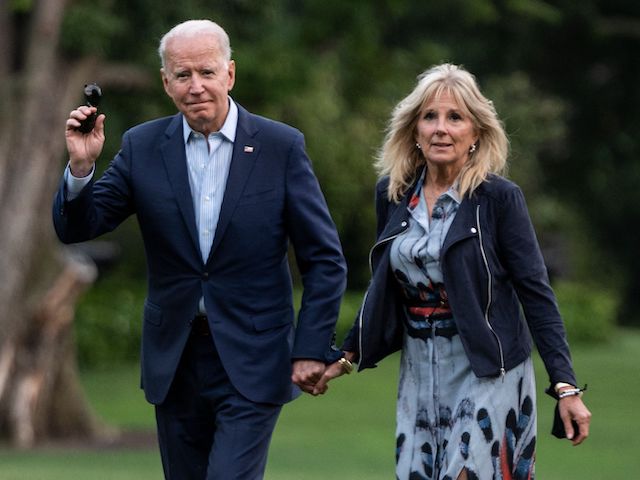 President Joe Biden and First Lady Jill Biden walk on the South Lawn upon returning to the White House in Washington, DC, on July 18, 2021, after spending the weekend at Camp David. (Andrew Caballero-Renyolds/AFP via Getty Images)