President Joe Biden conceded Wednesday that inflation was a problem, three months after dismissing it as temporary.

“Everything from a gallon of gas to loaf of bread costs more,” Biden said during an event promoting his infrastructure bill in Baltimore. “And it’s worrisome, even though wages are going up.”

The president took a sharply different tone from his comments in July, when he dismissed rising costs and inflation as temporary and nothing to worry about.

“Some folks have raised worries that this could be a sign of persistent inflation. But that’s not our view,” he said at the White House on July 19.

“Our experts believe and the data shows that most of the price increases we’ve seen are, were expected and expected to be temporary,” he continued.

All along Biden tried to downplay its impact in the hope it would simply go away:

In October, the inflation rate hit 6.2 percent, up 0.9 percent from just a month earlier marking it as the highest rate since November 1990.

But Biden tried to argue the rising cost of goods was somehow only proof of how his policies were working.

“Because of the strength of our economic recovery, American families have been able to buy more products,” he said.

Biden argued Americans had more money than ever thanks to his child tax credit and the one-time $1,400 checks passed in March.

“But what happens if there’s nothing to buy and you got more money?” Biden asked. “You compete for getting it there. It creates a real problem.”

Biden tried to reassure Americans that he had spoken to CEOs of some of the largest companies in America who told him that things were going to be ok. 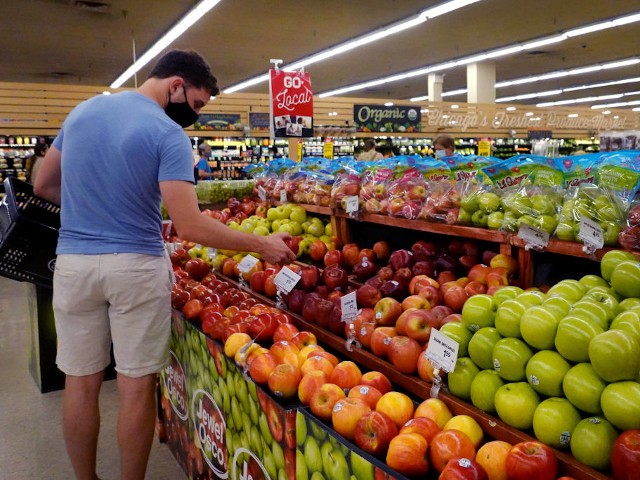 Customers shop for produce at a supermarket on June 10, 2021 in Chicago, Illinois. Inflation rose 5% in the 12-month period ending in May, the biggest jump since August 2008. Food prices rose 2.2 percent for the same period. (Scott Olson/Getty Images)

Buț corporate executives are privately warning the president and his administration that they are still not taking the issue seriously.

“I don’t think the administration is on top of it at all,” a CEO of one of the U.S.’s largest companies told Politico on condition of anonymity. “How many people inside this White House really know what inflation is or how it impacts businesses? It’s not really their fault. It’s been so long since we really had it.”

Biden also faces dissent from his own party, as Sen. Joe Manchin (D-WV) pointedly noted that the inflation Americans were experiencing is obviously not temporary.

“By all accounts, the threat posed by record inflation to the American people is not ‘transitory’ and is instead getting worse,” he said in a statement. “From the grocery store to the gas pump, Americans know the inflation tax is real and DC can no longer ignore the economic pain Americans feel every day.”

By all accounts, the threat posed by record inflation to the American people is not “transitory” and is instead getting worse. From the grocery store to the gas pump, Americans know the inflation tax is real and DC can no longer ignore the economic pain Americans feel every day.