Nikole Hannah-Jones, author of the debunked New York Times ‘1619 Project,’ “blames America for her family’s problems,” according to Mary Grabar, Ph.D., resident fellow at the Alexander Hamilton Institute for the Study of Western Civilization and author of Debunking The 1619 Project: Exposing the Plan to Divide America and Debunking Howard Zinn: Exposing the Fake History That Turned a Generation Against America.

Grabar joined Breitbart News Saturday with host Matthew Boyle to discuss the power of false historical narratives on American society and the danger in the proliferation of Hannah-Jones’s work and Critical Race Theory.

“She is not a historian,” Grabar said, explaining Hannah-Jones’s background is in journalism whose “beat is race,” and came to national prominence because in 2019, she proposed “upon remembering a high school black studies class … devoting a special issue to the 400th anniversary of the arrival of the first Africans at Jamestown” to the New York Times Magazine.

The magazine published a “completely distorted view … of what 1619 meant,” Grabar explained, continuing that Hannah-Jones’s view on this part of history “came almost exclusively from Lerone Bennett, who was this polemicist … and he’s also the one who coined the phrase ‘black power’ … and, of course, Stokely Carmichael took it up as a rallying cry, inspiring riots and mayhem.”

In the middle of the violent riots across the country in the summer of 2020, Hannah-Jones remarked in a tweet that “it would be an honor” to have the riots called “The 1619 Riots.” She later deleted the tweet.

Speaking about Hannah-Jones’s upbringing, Grabar remarked that “she has a black father and a white mother. The mother hardly ever gets any mention — she only focuses on the black side of her family.”

Hannah-Jones’s father was “discharged under murky circumstances” from the military and “had to take menial jobs for his entire life,” leading to the perception that “he’d been cheated,” Grabar said.

She also explained that Hannah-Jones was subject to the notorious busing policy of the 1960s and 1970s, where children were “taken away from their communities, from, you know, where their friends are from and where their churches are, into a sort of an alien place, and they have difficulties.” 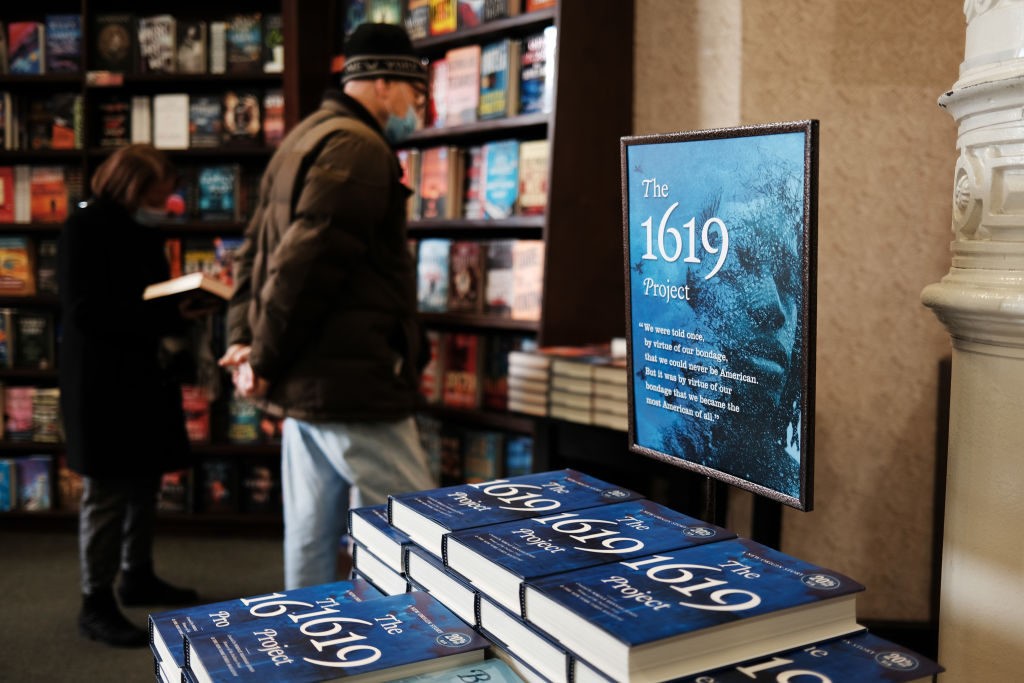 The new book by journalist Nikole Hannah-Jones, “The 1619 Project: A New Origin Story” is displayed at a New York City bookstore on November 17, 2021 in New York City. (Spencer Platt/Getty Images)

She “was bused to a majority-white school in a nicer neighborhood,” Grabar said of Hannah-Jones. “So, from second grade, she was bused one hour each way to this nice school and she recently recounted how she observed the changes, as she was riding along, how the houses got nicer, you know, the streets were kept up, and she was going into this ‘white world,’ and there she claimed she was not taught black history.”

“From a historical perspective, we can see [how] the bad policies of the 1960s and 1970s, which produced busing, and produced these radical activists who are writing these false histories — these were being taught in the schools to people like Nikole Hannah-Jones, who has risen to the top by producing this false narrative of American history, and weaving it in with her own personal story,” Grabar said.

“So, someone who probably could have benefitted from psychotherapy is now being exalted and placed on a platform as a historian whose, you know, are worthy of being taught in schools K through 12, and at the college level,” she concluded.

Hear that? Cuba's tyranny is the "equity" the 1619 cult wants. https://t.co/gvxeiOwKEK

Grabar explained that Hannah-Jones’s first experience with “black history” came when she was introduced to “this fraud of a historian” Lerone Bennett, “and that radicalized her.”

“And she says that she became incorrigible,” Grabar continued. “She would not say the Pledge of Allegiance, she began to hate America, and so she blames America for her family’s problems. … You’ve got a woman who seems very embittered, blames all white people and her country for problems that she had.”

Grabar explained that Hannah-Jones took on a “Marxist” worldview that she “uses to explain current events, through that historical lens, and the end game is a Marxist socialist revolution and also reparations.”

Mary Grabar is also the founder of the Dissident Prof. Education Project. Debunking Howard Zinn: Exposing the Fake History That Turned a Generation Against America and Debunking the 1619 Project: Exposing the Plan to Divide America can be found on her website, as well as Amazon and Barnes and Noble.