Hogan, a Republican governor in a state His Fraudulency Joe Biden won by 33 points, is running for a third term. One of his proposals, a blatant finger in the eye of the left’s “defund the police” movement, is called “Re-fund the Police.”

“To reverse the tide of rising crime, we need to stop demonizing and sabotaging the dedicated men and women who risk their lives every single day to keep the rest of us safe. Enough is enough. We cannot defund the police. We need to re-fund the police. Instead of less funding, we need more investment in public safety,” he said.

That’s why, Hogan said, he plans to spend $150 million to shore up law enforcement funding.

“Our $150 million ‘re-fund the police’ initiative will provide a desperately needed shot in the arm to our state and local police agencies and their critical efforts to stop crime,” Hogan said.

And according to this internal poll (and to the surprise of no one), 88 percent of likely black voters in Maryland support the plan. A full 64 percent “strongly” support it, while 24 percent “somewhat support” it. The numbers are just as lopsided among white (89 percent support) and Hispanic (74 percent support) voters.

Democrats, of course, who have become dangerous nihilists beholden to the fascist and violent left, are denouncing the plan.

The thing to remember about the otherwise bucolic Maryland is that it also holds Baltimore, a predominantly black city ravaged by decades of Democrat rule.

Why would black people, who are disproportionately affected by violent crime, want fewer police officers? 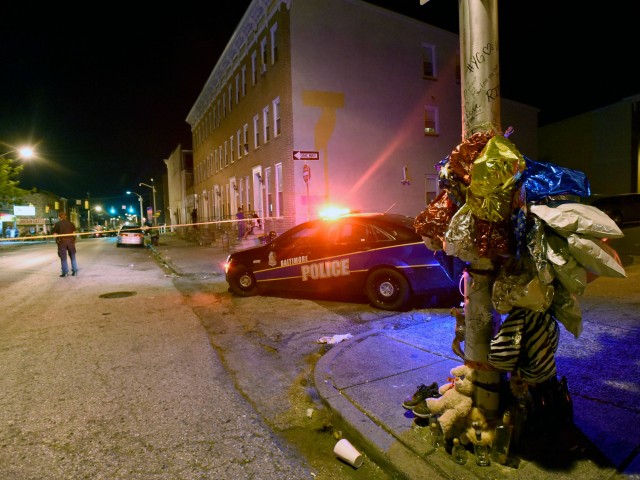 A previously created memorial, right, stands as Baltimore police work at a scene where multiple people were shot in Baltimore (AP Photo/Steve Ruark).

The corporate media’s gaslighting just isn’t working anymore, and this is why Democrats are in grave danger of losing the very vote they need most to remain a national party — the black and Hispanic vote. As we’ve seen over the past few years, these two groups are slipping away from Democrats. Exit polls show that in Virginia, Gov.-elect Glenn Youngkin won 54 percent of the Hispanic vote!

All the media’s lies about “systemic racism” and “defunding the police” are losing their potency in the face of reality of life under Democrat rule. In Democrat-run cities, violent crime is exploding, as is the kind of property crime that undermines the quality of life as businesses close and flee to sane places where the law is actually enforced.

All of these issues disproportionately affect the black and Hispanic Americans who live in these failing cities.

Regardless of race, we all want the same things in life: good schools, safe streets, and a stable living environment so we can at least count on the future.

Nothing upends your quality of life more than violence, and Democrats are now seen correctly as the pro-violence, pro-criminal, pro-rioter party.

If you want to live in a Utopia where the air, water, and streets are safe and clean, where people of all races and backgrounds live together in harmony, where we all own guns, but there’s no violent crime or mass-shooting crises… It’s right here in Rural MAGA Land.