As talks commenced in Vienna this week in an effort to revive the 2015 Iran nuclear deal, Israeli Prime Minister Naftali Bennett warned countries worldwide against caving to Iranian “nuclear blackmail” by supplying the “murderous” Iranian regime with sanctions relief and funding.

In a video message posted on Monday, Israel’s prime minister called upon the world to refuse to give in to the Islamic republic’s “nuclear blackmail.”

“Today Iran will be arriving at negotiations in Vienna with a clear goal: to end sanctions in exchange for almost nothing,” Bennett began.

Don’t give in to nuclear blackmail. pic.twitter.com/Pr0BO6dGDM

“Iran won’t just keep its nuclear program; from today, they’ll be getting paid for it,” he added.

Quoting a senior Iranian military official, he pointed to the Iranian regime’s true ambitions in its nuclear program.

“Iran doesn’t hide its intentions,” he said. “Just a couple of days ago, the senior command of Iran’s armed forces declared, and I quote, ‘We will not back off from the annihilation of Israel, not even one millimeter.’”

Bennett was referring to Brig. Gen. Abolfazl Shekarchi, the spokesman for Iran’s armed forces, who called for the total elimination of the Jewish state during an interview with an Iranian regime-controlled media outlet on Saturday.

The Israeli Prime Minister also called out Tehran for terrorizing its own citizens.

“Just this week the Iranian regime shot its own people on the streets of Isfahan for having dared protest the lack of water in their country,” he said. “Yes, they shot their own citizens just for being thirsty.”

“Such a murderous regime should not be rewarded,” he added.

Noting Iran’s “violations and undermining of the nuclear inspections,” Bennett lamented that some believe the theocratic republic deserves to have its “sanctions removed and hundreds of billions of dollars poured right into their rotten regime.”

“They’re wrong,” he declared. “Iran deserves no rewards, no bargain deals and no sanctions relief in return for their brutality.”

He concluded by urging world powers to stand up to the regime’s “nuclear blackmail.”

“I call upon our allies around the world: do not give in to Iran’s nuclear blackmail,” he said.

Iran, the largest state sponsor of terrorism worldwide, claims its nuclear program is for energy purposes, but world leaders — including the six nations that joined the 2015 deal to limit Iran’s nuclear weapons capacity — say enriching uranium may lead to Iran’s ability to quickly create a nuclear weapon.

The Obama-led nuclear deal — deemed fatally flawed and highly one-sided by many, and from which then-President Donald Trump withdrew in 2018 — delineates an enrichment limit of 3.67 percent.

Iran has been accused of violating the agreement as Tehran produces more enriched uranium. 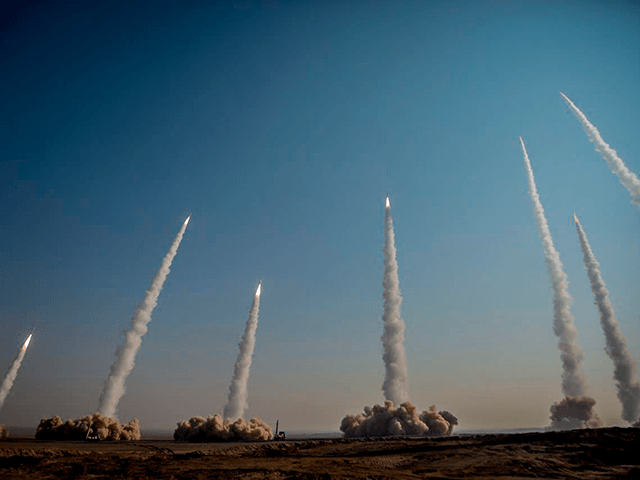 Recently, the International Atomic Energy Agency told member nations in its confidential quarterly report that Iran has an estimated stock of 39 pounds of uranium enriched to up to 60 percent fissile purity, an increase of almost eight kilograms since August.

Nevertheless, current nuclear talks in Vienna may see the United States and other world powers provide Iran with economic sanctions relief in exchange for temporary restrictions on its nuclear program.

This month, former U.N. ambassador Nikki Haley claimed the Biden administration could not be trusted to stop the Iranian nuclear program she deemed a threat to Israel’s existence.

She also suggested the Jewish state reject waiting for Biden’s approval to counter the Iranian threat.

“We have to prepare for a world … where Iran doesn’t have constraints on its nuclear program,” he said, adding that options are being considered to “deal with” such a scenario even as the Biden administration seeks a return to the Iran deal.

Also last month, Rep. Mo Brooks (R-AL), along with Republican colleagues, blasted President Biden and his administration for displaying weakness in its relations with Iran, having “inexplicably” removed sanctions from Iranian missile producers, and for “empowering” terrorists.

With an eye on nuclear weapons and through support of terrorist organizations such as Hezbollah, Hamas, the Palestinian Islamic Jihad, and the Houthis in Yemen, Iran continues to be a growing global threat to the interests of many countries.