President Joe Biden has slashed the deportation of illegal migrants from 25 cities by roughly 90 percent, so helping business groups with a flood of desperate, low-wage workers.

Biden’s business giveaway was revealed by the Center for Immigration Studies, which also showed that Biden’s deputies have reduced by two-thirds the deportation of criminal migrants who threaten Americans and the nation’s growing population of illegal migrants.

Only 18,713 illegals were formally “removed” — deported —  from 25 interior cities, such as Atlanta, Baltimore, and Miami, from January to July in 2021, according to the data from the Immigration and Customs Enforcement (ICE) agency. The 2021 removal number includes only 6,000 migrants convicted of serious crimes, such as MS-13 migrants.

In 2019, under Trump, 186,019 migrants were removed from the 25 cities, including 17,553 migrants convicted of serious crimes. Amid the Trump enforcement, employers were forced to raise wages, especially for lower-income Americans.

In 2020, despite the coronavirus crash, Trump’s deputies removed 93,247 migrants from the cities, including 13,120 migrants convicted of serious crimes.

In 2021, the 25-cities’ deportation rate has dropped to roughly 3,000 per month since the Senate’s confirmation of Alejandro Mayorkas, Biden’s appointee to run the Department of Homeland Security. 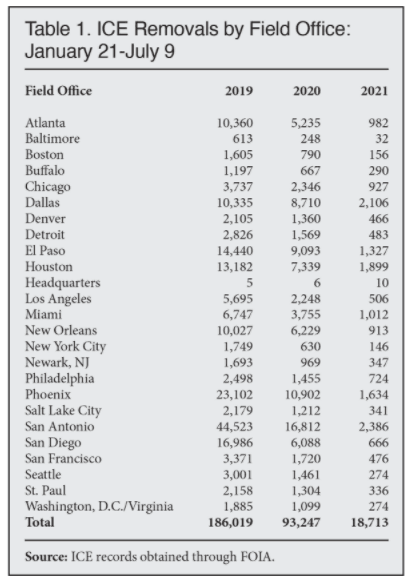 In calendar year 2021, Mayorkas is on track to deport just 40,000 migrants from the 25 cities. Mayorkas’s annual deportations amount to one of every 275 illegal migrants living in the United States.

In 2019, before the coronavirus crash, Trump’s deputies removed 267,000 illegal migrants nationwide, including many who committed violent crimes in the United States.

Mayorkas’s likely deportation of 40,000 migrants in all of 2021 from the 25 cities is less than just one month of arriving “got-aways” — illegal migrants who are detected yet successfully evade the border patrol. So far, roughly 400,000 job-seeking migrants have sneaked across the border under Mayorkas’ lax rules.

The Biden ICE data does not include migrants who were turned back from the border — and sometimes deported to their homelands — under the Title 42 anti-epidemic rules.

Mayorkas is a Cuban immigrant and a pro-migration zealot. In a November Senate hearing, for example, Sen. Tom Cotton (R-AR) asked him: “What should be a higher priority of the United States Government? Securing our border or giving amnesty to illegal aliens who are already here?”

“Justice is our priority,” Mayorkas responded, adding “That includes securing our border and providing relief to those [migrants] who qualify for it under our laws.”

Mayorkas’ policies reflect the U.S. government’s post-1990 policy of extracting migrants from other countries to work, rent, and spend in the United States. This economic policy pulls migrants from other countries via several channels — legal migration, visa workers, and illegal migration — so flatlining wages for employees, but spiking real estate values and the stock market for investors.

Mayorkas DHS refused to release some data that was formerly made public, according to CIS:

ICE has so far refused to provide information on whether the removed alien was arrested at the border or in the interior. Therefore, these statistics should be interpreted with caution because it is not clear to what extent they may reflect the level of enforcement at the border as well as in the interior. Nevertheless, it is possible to see in these records just how dramatically the new Biden policies have reduced ICE enforcement activity.

Mayorkas and his allies say they are using taxpayer funds to focus on the “worst of the worst.”

According to ICE sources, because of the cumbersome process, and also because of sanctuary policies in some large jurisdictions, most ICE arrests are now handled by fugitive operations teams rather than by ICE officers working in jails, as had been the norm before the Biden policies were implemented. Routine arrests, once approved, now require a team of several officers who work for days to prepare a plan and execute each arrest, which now must take place in the community in an area not designated a “sensitive” location.

One ICE staff member told me that the process is extremely inefficient: “Instead of having one person working in a jail who can arrest four or five criminal aliens in a shift, now we have to send five or six guys out to make one or maybe two arrests in a shift.”

In addition to requiring what is essentially pointless busywork to seek an extra layer of approval for each arrest, agency leadership has also reduced interior enforcement by downsizing the number of working officers. This has been accomplished in many ways, including sending officers to work at the border and even by paying officers not to work. For example, ICE personnel recently were given extra “administrative leave” days off for Veteran’s Day and the Friday after Thanksgiving, which are not typically federal holidays.

Pending the arrival of new leadership in the agency, states should use their powers to ease deportations, Vaughan wrote:

With less immigration enforcement, American communities will continue to be saddled with the costs associated with illegal immigration, including displacement of U.S. workers, wage depression, more spending on social services and education, and additional crime problems. While Congress theoretically could intervene to impose stricter enforcement mandates and spending requirements, in the meantime state and local governments should act to discourage illegal settlement, penalize illegal employment, maintain strict eligibility requirements for all public benefits and driver’s licenses, and ensure that state and local law enforcement agencies are cooperating fully with ICE to identify criminal aliens.