Many Democrats want to see American society transformed by migration and diversity, according to a survey by the left-leaning Public Religion Research Institute (PRRI).

“More than six in ten Democrats (64%), mostly agree that they prefer the U.S. to be made up of people from all over the world” — instead of from American families and communities, said the survey, titled “Competing Visions of America: An Evolving Identity or a Culture Under Attack? Findings from the 2021 American Values Survey.”

The late-September survey asked 2,508 Americans about various aspects of immigration and diversity. The results showed that Democrats are becoming increasingly radical but also that more Republicans are openly opposing their planned demographic replacement — and that Latinos increasingly dislike imposed diversity.

For example, more Republicans are resisting the nation’s open-door policy, according to the poll:

‘Two-thirds of Republicans (65%) say instead that immigrants are a burden because they take jobs, housing, and health care,” the report said.

But the survey also reported that “more than eight in ten Democrats (82%) say that immigrants strengthen the country because of their hard work and talents.”

Back then, domestic politics were dominated by left vs. rights arguments over how to distribute the huge profits generated by the nation’s huge manufacturing economy.

Those class-and-wages politics continue, but they get little attention from the establishment media since the bipartisan establishment doubled immigration in 1990. That doubling helped to stagnate wages, supercharge the stock market, and also shifted media coverage onto the “diversity” disputes that are used to break up the social norms developed by Americans to help share civic and economic wealth.

“Increasingly, this what American elections have been about — less about particular policies and more about who we are …, [and] ‘Are we kind of an evolving identity or are we a culture that’s been under attack?'” Jones said in a press briefing on November 1:

What we’re struggling over, I think in the bigger debates in the country, is “What is America about? Was there a golden age right for America?” and we’re seeing this very different vision among Democrats and Republicans.

Democrats have moved left on immigration and diversity since 2012, largely because they followed their Democratic leaders, who have increasingly championed the claim that the United States is a diversifying “Nation of Immigrants,” not of Americans. This stance has also prompted Democrats to revive racial demands so they can argue that Americans’ culture must be transformed by migrants and diversity.

For example, the Democrats’ candidate for governor in Virginia called on November 1 for a dramatic reduction in the percentage of teachers who are white: “Fifty percent are students of color and yet 80 percent of teachers are white: We all know what we have to do …. to make everybody feel comfortable,” he threatened.

McAuliffe's closing message: Va has too many white teachers

“50% of the students at Va. schools K-12, 50% are students of color & yet 80 percent of teachers are white. We all know what we have to do in a school to make everybody feel comfortable in school. So, let’s diversify" pic.twitter.com/TJC2beResW

Democrats are signaling they are more comfortable with the demographic and cultural changes caused since immigration numbers were doubled in the 1990 bipartisan deal between President George H.  Bush and Democratic Sen. Ted Kennedy. The survey said:

[Only] three in ten Democrats (31%) agree with the idea that things have changed so much that they often feel like strangers in their own country, compared to 39% of independents and 56% of Republicans.

There is nearly a 50-percentage-point gap between Republicans (80%) and Democrats (33%) on this question. Independents mirror all Americans closely (50% agree vs. 49% disagree).

One reason for the Democrats’ comfort amid diversity is that their coalition is increasingly based on the groups that oppose Americans and their pro-solidarity norms. Those groups include religious minorities, status-seeking college progressives, immigrant cultural minorities, comfortable suburbanites, investors, and corporate employers.

“Democrats are four times more likely to say the decline of the white population in the 2020 Census is mostly positive vs. negative (39% vs. 9%),”  the survey noted.

In contrast, Republicans “are more than five times less likely to say this change is positive vs. negative (6% vs. 33%),” the report said.

The poll showed that college-educated Americans are especially eager to welcome lower-status and often compliant migrants:  “White Americans with college degrees are more likely than those without college degrees to hold positive opinions of newcomers (69% vs. 43%).” 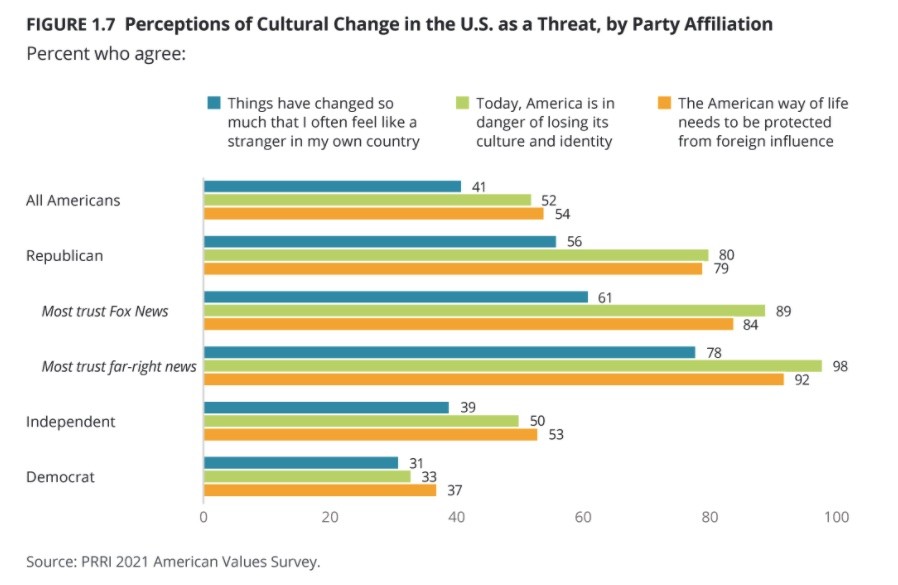 That Democrats’ pro-diversity policy may shift back towards the center if more college-graduate voters object to government-fueled hiring discrimination, or if Latino voters continue their shift towards the populist wing of the GOP.

But the survey shows that Latino voters are increasingly skeptical about additional immigration, in part, because their wages are cut and their housing costs are increased: “Hispanic Americans are less likely to believe that newcomers strengthen American society today (62%) than they were in 2018 (72%) but remain similar to 2011 levels (64%).”

The PRRI poll argues that national public support for amnesty remains level as the two parties are moving further apart:

The poll does not include any questions that highlight most Americans’ agreement that the government should favor Americans over immigrants, especially for jobs.

This opposition is multiracial, cross-sex, non-racist, class-based, bipartisan, rational, persistent, and recognizes the solidarity Americans owe to each other. The polling — and the census data — debunks the 1950s claim by Mayorkas and other advocates that Americans must live in a “nation of immigrants.”

Yet business and progressive groups repeatedly insist that 300 million Americans must subordinate their priorities to the goals of migrants. “Citizenship Day is a reminder that the job of every single one of us is to ensure that America remains a country worthy of immigrants’ aspirations,” President Joe Biden said in a September 17 video. The same pro-migrant message is being pushed by his border chief, Alexandria Mayorkas: