Pennsylvania state Sen. Doug Mastriano (R-Franklin), a potential Republican gubernatorial candidate in the Keystone State, has been accused by critics of violating campaign finance laws, as they say he is essentially campaigning for governor of the state without a formal campaign committee set up, soliciting donations through his committee.

Mastriano, however, adamantly asserts he is in compliance with Pennsylvania campaign finance law — which is a relatively nebulous legal landscape, according to experts.

Mastriano, a state lawmaker who this year positioned himself as a leading advocate for election integrity yet joined his Republican colleagues in voting for the measure, Act 77, permitting no-excuse voting, has launched an exploratory committee to launch a gubernatorial bid in the state. However, he has not formally declared a run. Despite that, there is looming suspicion that he is soliciting campaign contributions through groups supporting him, essentially campaigning for governor of the state without a formal campaign committee set up.

The draft Doug for Governor website’s donation link goes to a page via Friends of Doug Mastriano. The donation link on his state Senate website is the same, listing “Doug Mastriano (PA-SD-33)”on the fundraising invite. Critics say he is essentially unofficially running for governor and raising money through this committee, prompting suspicion of violating campaign finance laws.

A large electronic billboard near I81 Exit 16 along US 30, which flashes several advertisements, includes one with a photo of Mastriano which reportedly reads, “Let’s Change This Man’s Title to Governor.” 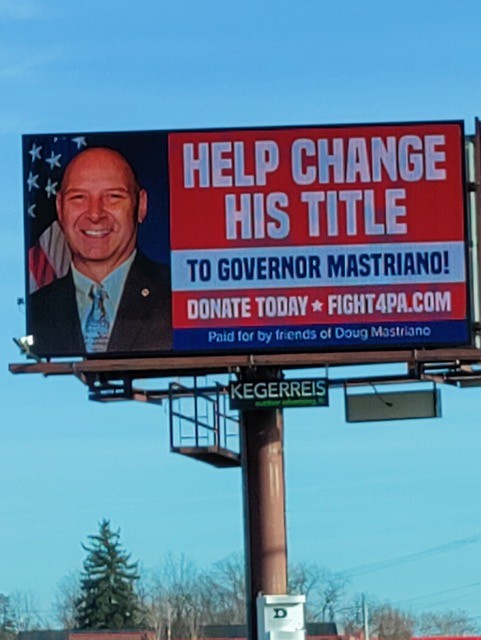 The sign’s disclaimer reveals that it is paid for by Mastriano’s state Senate campaign committee, fight4pa.com. That is also his state Senate campaign website, which lists Friends of Doug Mastriano, P.O. Box 138, Fayetteville, PA 17222, as the contact address. The website is devoted to his capacity as senator — not a potential gubernatorial bid. This has prompted further suspicions that Mastriano is coordinating with groups supporting him to solicit campaign contributions. There are several ads and events showing Friends of Doug Mastriano as the facilitator, for both his State Senate work as well as this potential gubernatorial run. 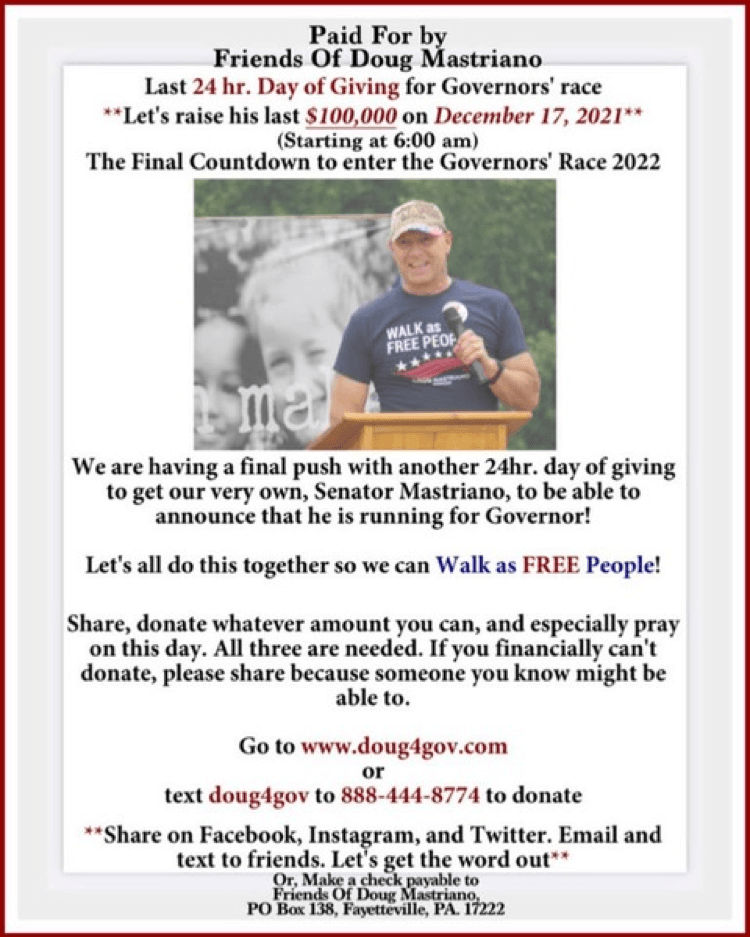 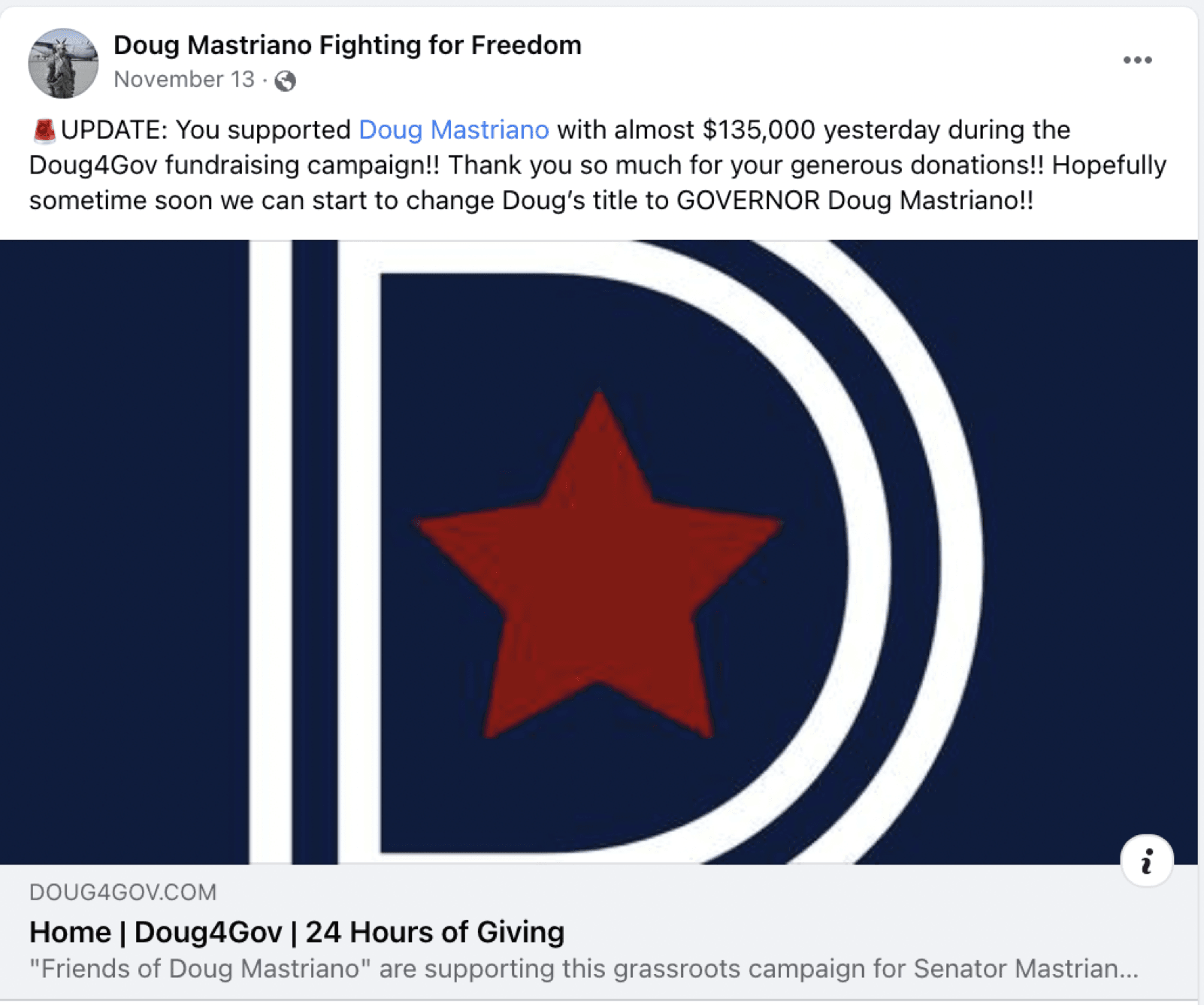 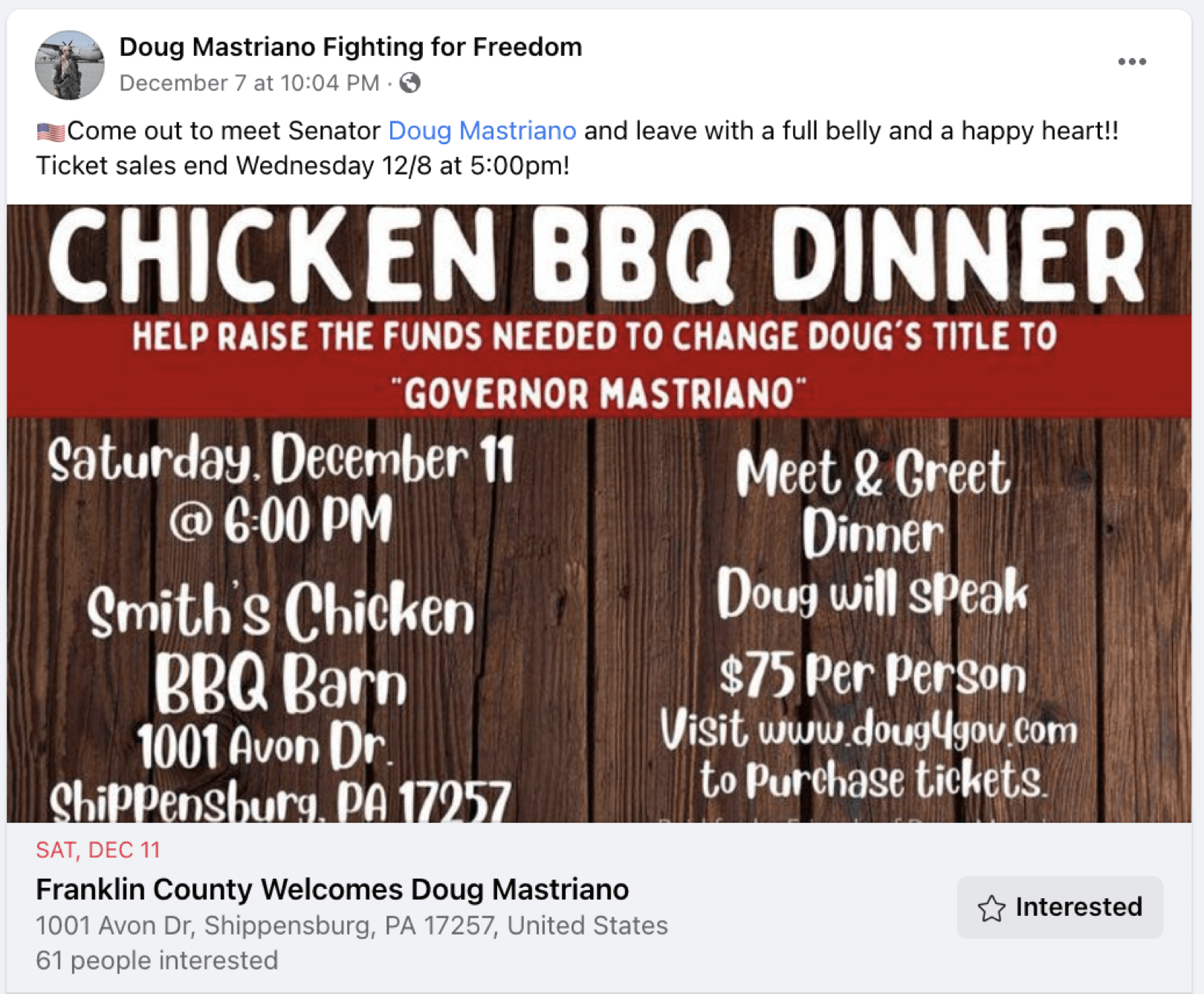 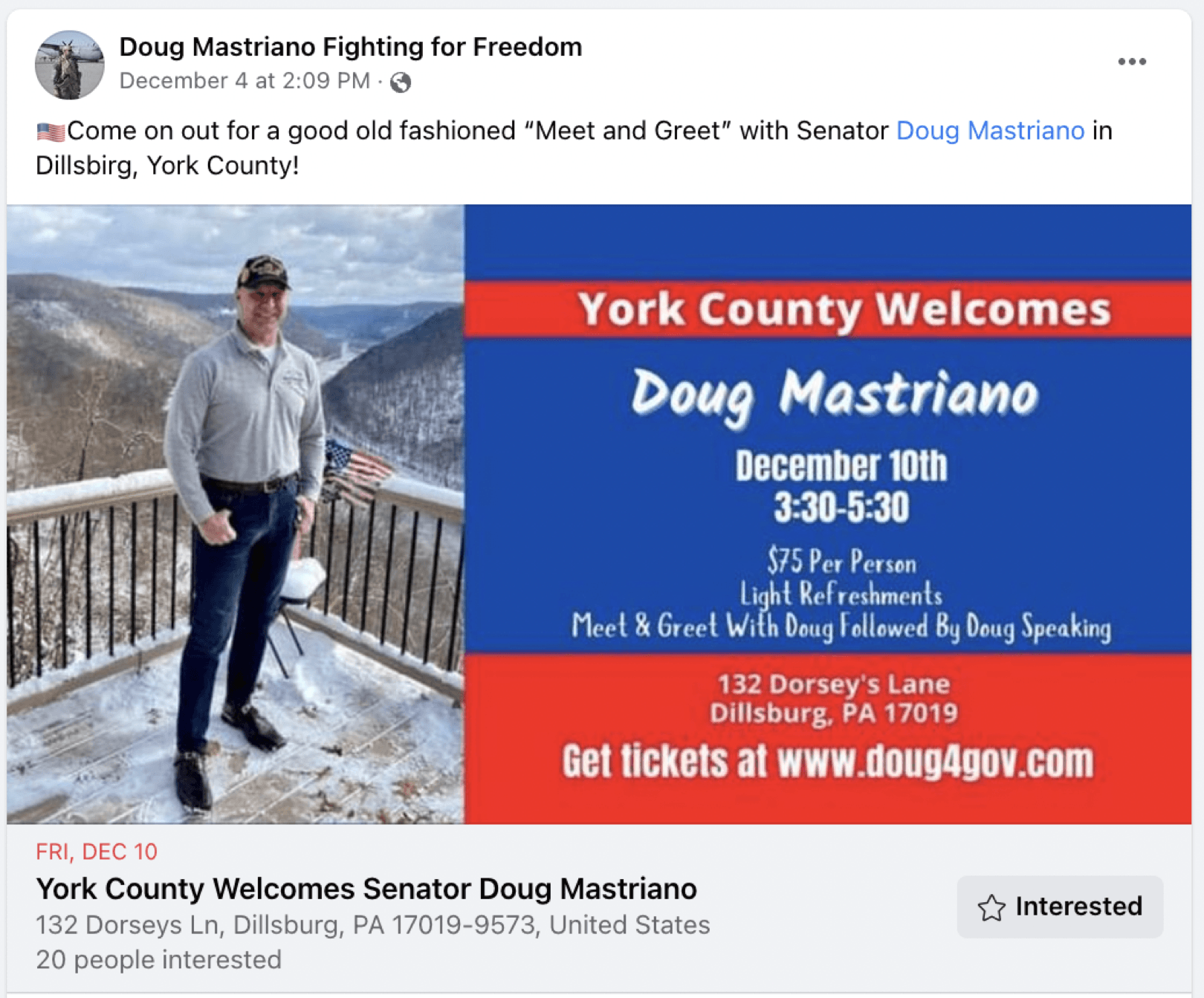 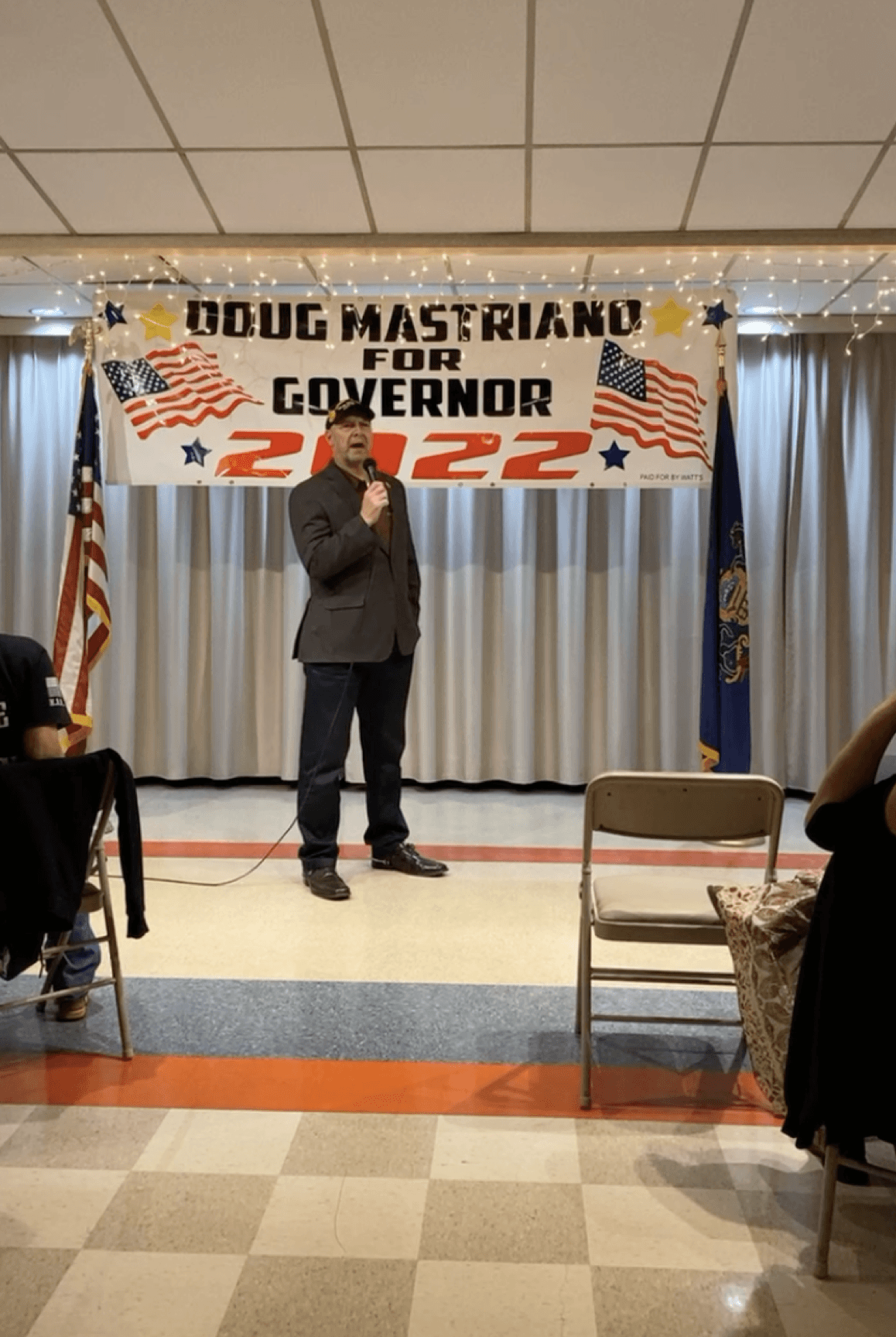 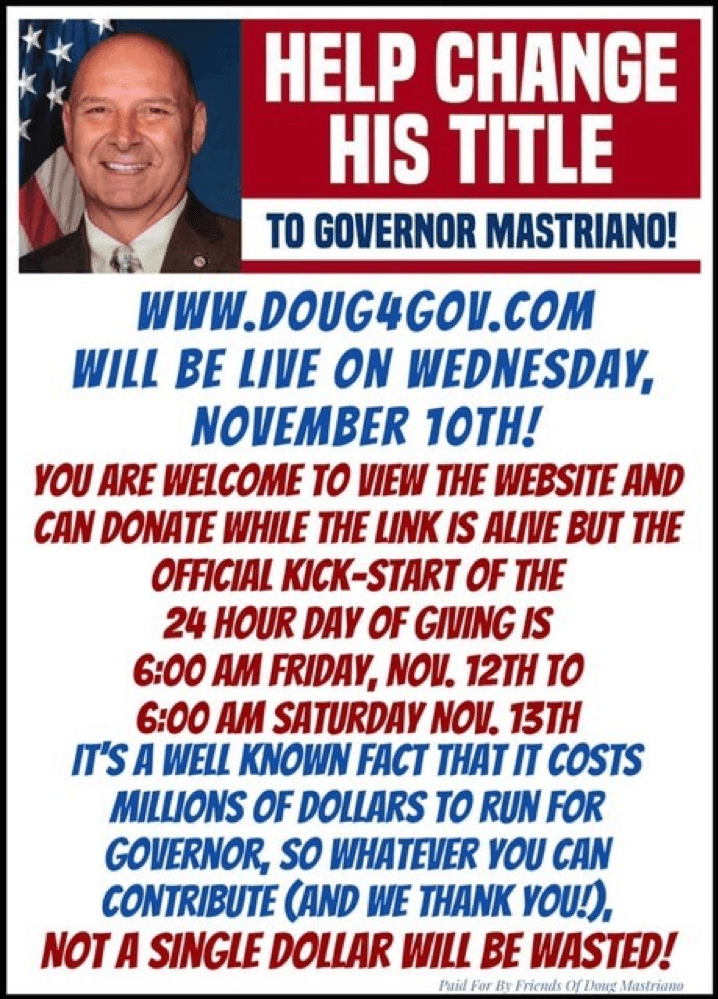 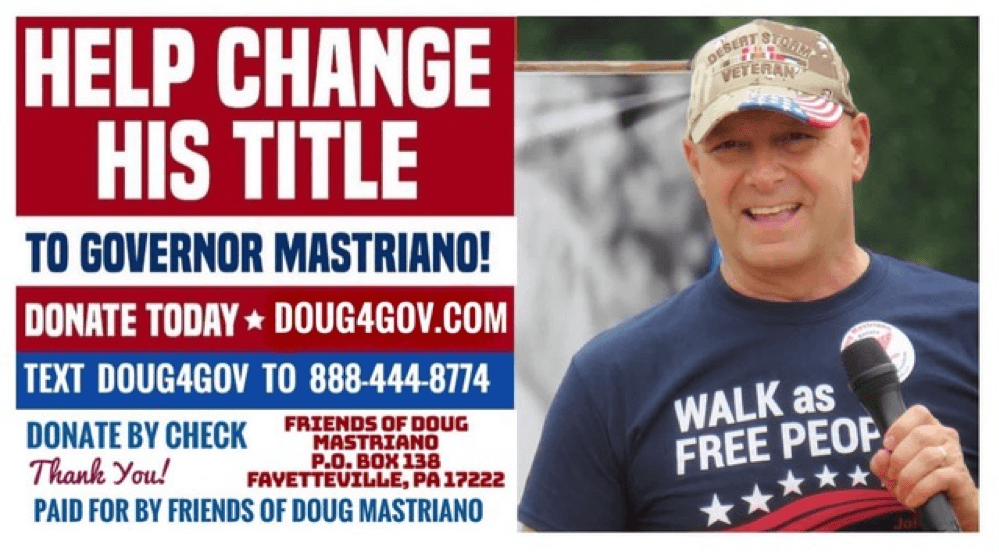 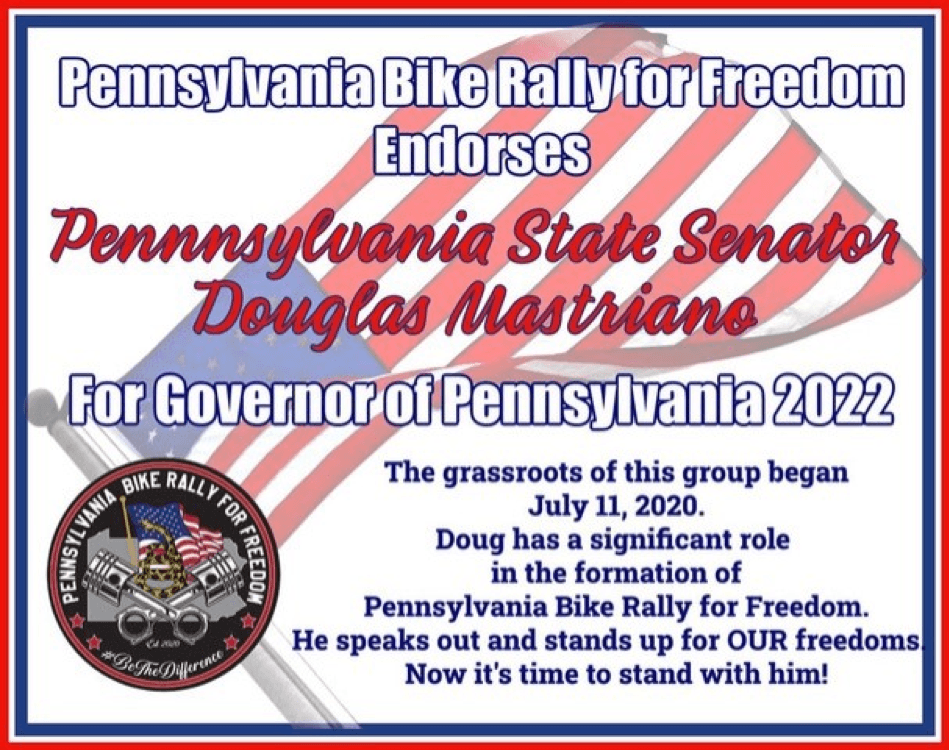 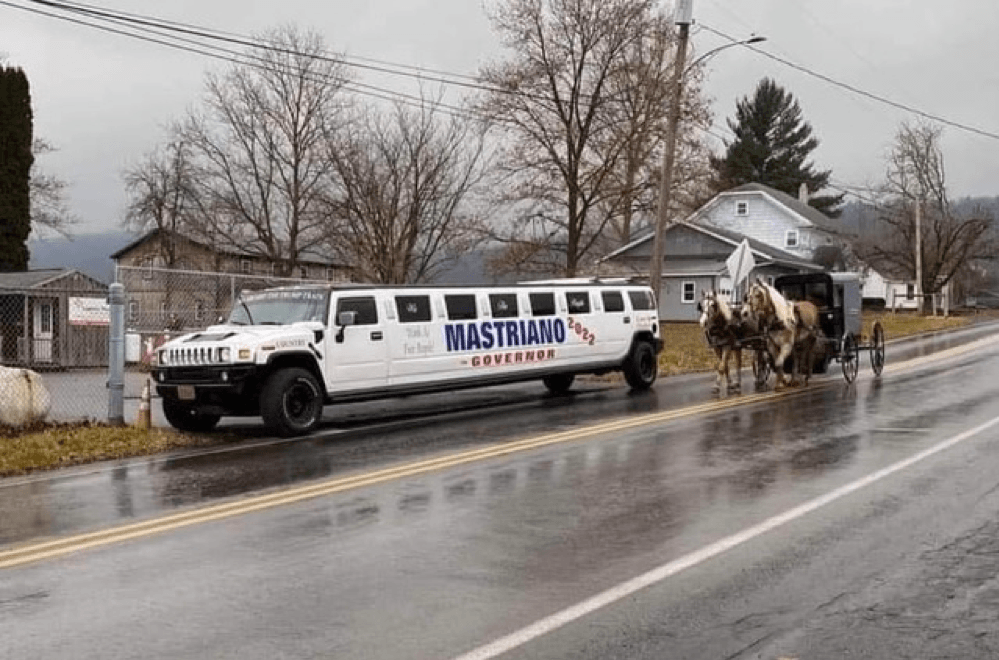 Mastriano, however, released a video addressed to “knuckleheads” who have raised questions.

The limo, for instance, was paid for by a supporter who “did that out of their own pocket,” he explained, knocking the “lefty” reporter who took a picture of the limo.

“I don’t have the money to do something like that,” he said, adding that quite a few people are “really going above and beyond the call of duty to help” him become their governor.

He went on to blast “so-called fellow Republicans” who “echo the lies of the left” to “advance their own selfish ambitions.”

Pennsylvania law does not explicitly recognize exploratory committees. The Department of State’s form used to register committees allows one to declare whether or not they are supporting a specific candidate or if it is a candidate-authorized committee, which essentially acts as an alter ego for the candidate. However, it is acceptable under Pennsylvania law to not specify which office one is specifically running for. It can be undeclared, and one can raise money under the pretense of exploring a run. In other words, there is nothing inherently wrong with an exploratory committee, according to legal experts.

The concern, however, is if one files for a committee under one office but uses it to run for another. This situation is a legal gray area, and that is where the suspicions surrounding Mastriano loom, as Pennsylvania campaign finance laws are hazy.

“Pennsylvania election law is very nebulous on this issue because there is a dearth of clarifying legal decisions,” Jesse D. Daniel, Esq. of the Daniel Law Group PLLC told Breitbart News.

“But the overriding policy behind these laws is for candidates to disclose and be up-front with the electorate. So candidates should always err on the side of being crystal clear in these matters so the electorate has the clarity and knowledge the law says they deserve,” he added.

Ultimately, the Department of State that collects the information has no prosecutorial powers in this realm and does not enforce the rules. That power lies with the attorney general’s office and local county prosecutors, although the attorney general’s office typically pursues cases which are more clear, like instances of fraud or blatant misuse of campaign funds. Local county prosecutors often do not pursue these issues either, given their political nature. In other words, there is no robust enforcement mechanism to test these situations and bring the claims in front of judges.

In an exclusive statement to Breitbart News, Mastriano adamantly denied that he is in violation of campaign finance laws.

“Any fundraising conducted by ‘Friends of Doug Mastriano’ is absolutely compliant with Pennsylvania campaign finance law,” he said in a statement,” adding that “any ‘speculation’ to the contrary is entirely false.”
“That speculation likely comes from those who are intimidated by candidates like me that have the ability to fundraise without having to rely on special interest and corporate money,” Mastriano added.
Pennsylvania’s Department of State responded to an inquiry from Breitbart News concerning the topic with a brief statement, noting that the office will not offer “advisory opinions on whether someone might or might not be in violation of the Campaign Finance law.”

Mastriano made waves over the summer after positioning himself as a lead advocate for election integrity, touring Arizona’s audit site at the Veterans Memorial Coliseum in Phoenix. However, he along with his Republican colleagues supported Act 77 in the Keystone State, “which arguably caused many of the issues seen during the 2020 election — particularly permitting no-excuse voting in exchange for the abolishment of straight-ticket voting,” as Breitbart News detailed.

“There were no red flags as evidenced that every Republican in the Senate supported it, even those of us who are routinely a ‘no’ vote on anything that could undermine our freedoms. And the near-unanimous Democrat opposition to this bill highlights that in its original form, there was no insidious risk,” he continued, casting blame on the PA Supreme Court, as well as Secretary of State Boockvar, and Governor Wolf, who he said “had other ambitions,” asserting they “rewrote Act 77 to compromise our election.”