Noem, who had previously in late 2020 stated she would not run against Thune and has been running for reelection, in a hypothetical matchup against Thune would begin with a 9-point lead if she does change her mind and gets in the Senate race.

“If the Republican primary were held today and Kristi Noem challenged John Thune, she would lead by a 49% – 40% margin, well outside the margin of error,” the polling memo, obtained by Breitbart News exclusively, reads. “Noem would only need to win over a sliver of the 10% undecided to break the 50% mark. Not only is she up by 9-points overall, but among ‘definite’ voters for either candidate, Noem leads Thune, 41% – 31%.”

South Dakota Governor Kristi Noem (R) announced she will sign legislation this week to protect babies with Down syndrome from eugenic abortions. https://t.co/utlLsPGgU3

The survey of 400 likely 2022 GOP primary voters in South Dakota was conducted from Jan. 10 to Jan. 11, and has a margin of error of 4.9 percent. That means Noem’s hypothetical lead in such a matchup is well outside the margin of error to begin any Senate campaign.

Thune just announced this month that he is running for reelection, even though Trump has expressed dissatisfaction with the longtime ally of Senate GOP Leader Mitch McConnell. As McConnell’s top deputy—Thune is the Senate GOP whip—the South Dakota senator has crossed Trump many times, and Trump has previously said he would back Noem if she ran against Thune.

Noem, for her part, said in December 2020 that she was not seeking to run against Thune, but things have changed significantly since then. Noem now has several million dollars in her gubernatorial campaign account—she could transfer this money to a federal super PAC to back any senate campaign—and the political climate has swung hard right, especially in red states like South Dakota, as President Joe Biden’s agenda stalls out.

Noem has reiterated her plans to just run for reelection as governor many times, including in a recent Breitbart News On The Hill video special filmed in South Dakota:

Noem said, adding that “I’m not” thinking about any future presidential campaign of her own at this time.

“I’d rather stay here in South Dakota and round up buffalo,” Noem said.
https://t.co/Ld9i7tU3kp

As such, one would think that Noem would need a really strong push from Trump and his family to actually run against Thune, who being McConnell’s top lieutenant will have the party’s establishment behind him.

Trump’s approval rating among GOP primary voters is extremely strong in South Dakota, and would theoretically go a long way to helping Noem should she run.

“The job approval ratings of Presidents Trump and Biden are polar opposites among GOP primary voters in South Dakota,” the polling memo reads. “President Trump is approved of by a huge 84%, including 62% who strongly approve. Conversely, President Biden is more than 80-points underwater, as only 8% approve of the job he is doing while a staggering 91% disapprove of his job performance, nearly all of whom strongly disapprove. President Trump’s support would be invaluable in a South Dakota Republican primary, while being tied to President Biden could be electorally fatal.”

This poll seems to be an indicator that Trump allies are at least beginning the courting process with Noem, and there are other indicators that Trump is itching for this fight as a proxy battle with McConnell for control of the GOP. It remains to be seen if Trump will personally lean into coaxing Noem into the Senate race, and if he does if Noem will accept Trump’s overtures. Thune’s decision to actually run for reelection—he held out all year last year without an announcement, making his decision in early January 2022—threw a monkey wrench into the state’s political scene as some say Noem was possibly going to run without Thune in the race, or at least U.S. Rep. Dusty Johnson (R-SD) would possibly get in. 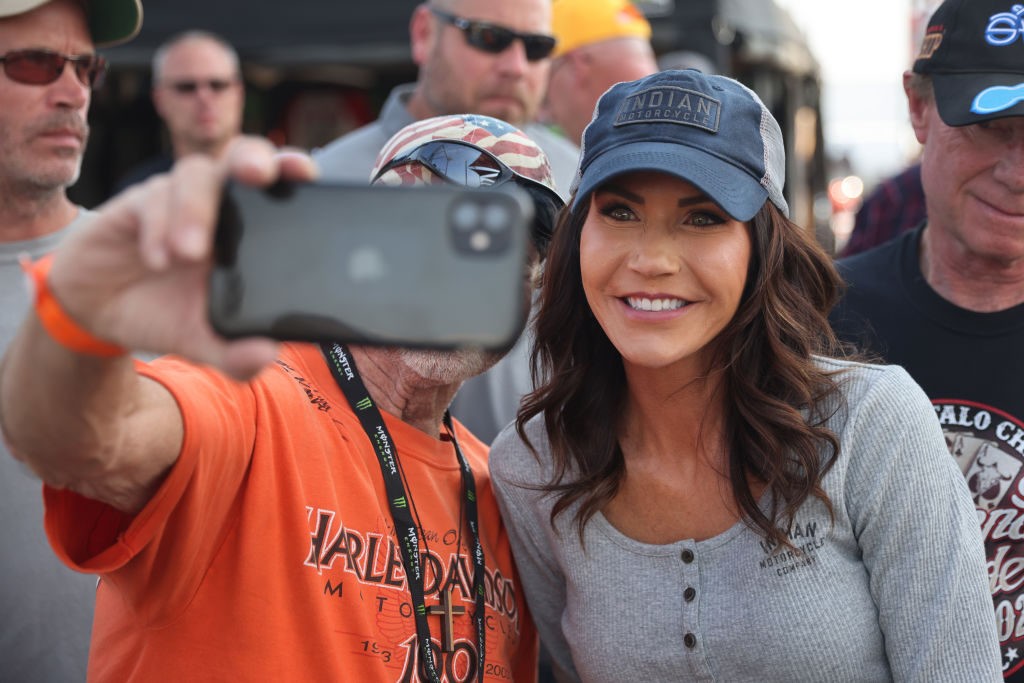 Johnson, who is also polled against Thune in the survey, starts off stronger than most challengers to a longtime and powerful senator like Thune if he were to run against him as well.

“John Thune leads Dusty Johnson, 47% – 30%, but fails to hit the critical 50% threshold. Furthermore, the undecideds in this ballot have a double-digit negative image of Thune (38% fav/53% unfav), indicating Johnson could close the gap considerably. Thune is leading, but Dusty Johnson has the strong name I.D. to make it a real race,” the polling memo reads.

What’s more, Noem’s and Johnson’s approval ratings with GOP voters in the state are much more in line with Trump’s than Thune’s numbers are. Noem has a total favorable rating of 82 percent, with 65 percent very and 17 percent somewhat favorable, compared with just 16 percent—4 somewhat and 12 very—who view her unfavorably.

Johnson’s overall favorability is 70 percent, with 37 very and 33 somewhat favorable, while his overall unfavorable number is 25 percent with 15 somewhat and 10 very.