Republicans on the Senate Judiciary Committee are sounding the alarm over President Joe Biden’s “screening protocols” for foreign nationals seeking visas to enter the United States after a British national took hostages at a Jewish synagogue in Texas only weeks after being allowed to legally enter the U.S.

Since the attack, the Biden administration has hidden details on how Akram was allowed to enter the U.S. in the first place. The only confirmed information states that Akram arrived at John F. Kennedy (JFK) Airport in New York City, New York on December 29 via a flight from the United Kingdom.

Despite a lengthy criminal record in the U.K. and his being known to British intelligence agents due to his alleged involvement with Islamic terrorism, Akram arrived on either a tourist visa or through the nation’s Visa Waiver Program (VWP) that allows foreign nationals from 40 different countries to arrive in the U.S., without a visa, and remain for up to 90 days. 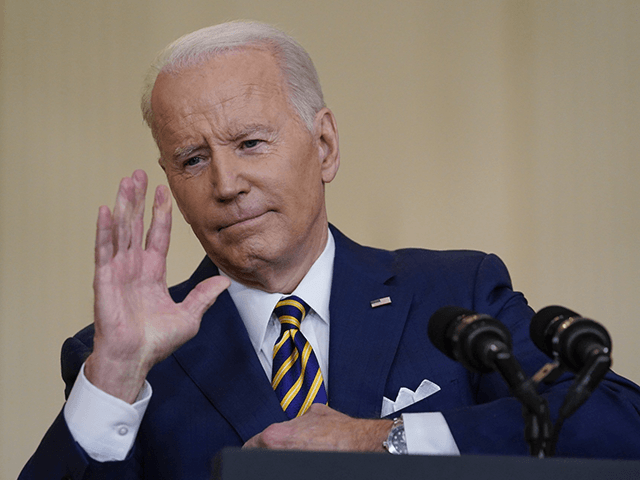 President Joe Biden gestures as he speaks during a news conference in the East Room of the White House in Washington, Wednesday, Jan. 19, 2022. (AP Photo/Susan Walsh)

As Akram’s own brother told reporters: “How had he gotten into America? … Why was he granted a visa? How did he land at J.F.K. airport and not get stopped for one second?” [Emphasis added]

Department of Homeland Security (DHS) Secretary Alejandro Mayorkas and Secretary of State Antony Blinken have been asked to provide information regarding Akram’s government-approved entry to the U.S. — including his immigration status.

“On the date of Mr. Akram’s most recent admission to the United States, was he admitted under the Visa Waiver Program or as an alien in possession of a valid nonimmigrant visa?” the senators ask:

If admitted pursuant to a nonimmigrant visa, in what status was he admitted and for what period? Was he ever granted a waiver of inadmissibility? Please explain. [Emphasis added]

In October 2021, the Congressional Research Service stated in a report on the Visa Waiver Program (VWP) that “some observers of the [VWP] have raised concerns about the possibility that terrorists will enter the United States under the VWP because those entering under the VWP undergo a biographic, rather than a biometric (i.e., fingerprint and digital photograph), security screening and do not need to interview in person with a U.S. consular official before embarking for the United States.” Please specify which criminal or security databases are not checked for VWP travelers as part of the ESTA process, but which are checked for aliens applying for a nonimmigrant visa at a U.S. consulate? [Emphasis added]

Were either of your Departments aware of such criminal history by Mr. Akram at the time of his Electronic System for Travel Authorization, visa, or admission application? [Emphasis added]

Akram’s entry to the U.S. under the Biden administration is not the first time that seemingly lax vetting protocols for foreign nationals seeking visas have been deployed.

With Biden’s massive Afghan resettlement operation, where more than 75,000 Afghans have been brought to the U.S. in just six months, many were not interviewed before their arrival, as Mayorkas previously confirmed.

Likewise, Biden has openly disregarded recommendations from the 9/11 Commission that tout the importance of in-person interviews for foreign nationals. In a policy change, Biden is now allowing those seeking H-1B, L-1, O-1, H-2B, and F-1 visas to skip in-person interviews as a requirement to secure their visas.