Voters across Georgia will see former President Donald Trump on their televisions beginning Tuesday as former Sen. David Perdue (R-GA) airs his first TV ad of the gubernatorial race in the form of a message from the former president.

The 30-second ad, first obtained by Breitbart News, will air on cable and satellite in the Peach State and features Trump reiterating his disapproval of incumbent Gov. Brian Kemp (R) and his endorsement of Perdue.

“The Democrats walked all over Brian Kemp. He was afraid of Stacey ‘the Hoax’ Abrams. Brian Kemp let us down. We can’t let it happen again,” Trump says in the ad, which the Perdue campaign told Breitbart News it spent six figures on to air statewide on Fox News Channel.

The remaining half of the ad switches over to praise for Perdue. “David Perdue, an America First conservative outsider, is the only candidate for governor endorsed by President Donald Trump,” a narrator says.

Trump then concludes the ad by saying, “David Perdue is an outstanding man. He’s tough. He’s smart. He has my complete and total endorsement. Vote for David Perdue.”

Also flashing on the screen are the words “Stop Stacey, Save Georgia,” the slogan for the campaign tour Perdue plans to begin on Tuesday in Alpharetta and continue throughout the week.

Perdue, a wealthy businessman who served as a U.S. senator for one term, plans to make about a dozen stops on the tour this week promoting the slogan, which some may find familiar from the high-stakes runoff race in which he and former Sen. Kelly Loeffler (R-GA) ran in January 2021. “Win Georgia, Save America,” the pair would assert throughout the runoffs as they emphasized that the Senate majority depended on at least one of the two winning their election. Perdue and Loeffler both ultimately suffered narrow and stunning defeats, which resulted in a Democrat-controlled Senate in Washington.

Perdue said in a statement about his return to the campaign trail, “I’m excited to be back on the road talking with Georgia voters about what’s at stake in this election.”

“This race is about putting people ahead of politicians, and that’s exactly what I’ll do as Governor. We’ll leave no stone unturned to share our bold vision to unite Republicans, stop Stacey Abrams, and save Georgia,” he added.

Perdue’s latest ad suggests he plans to heavily tout his support from Trump, who was also a vocal proponent of Perdue during the runoffs. Trump announced his endorsement of Perdue almost immediately after Perdue launched his campaign in December, a surprise to no one after the former president had been relentless in his criticism of Kemp over the 2020 election. 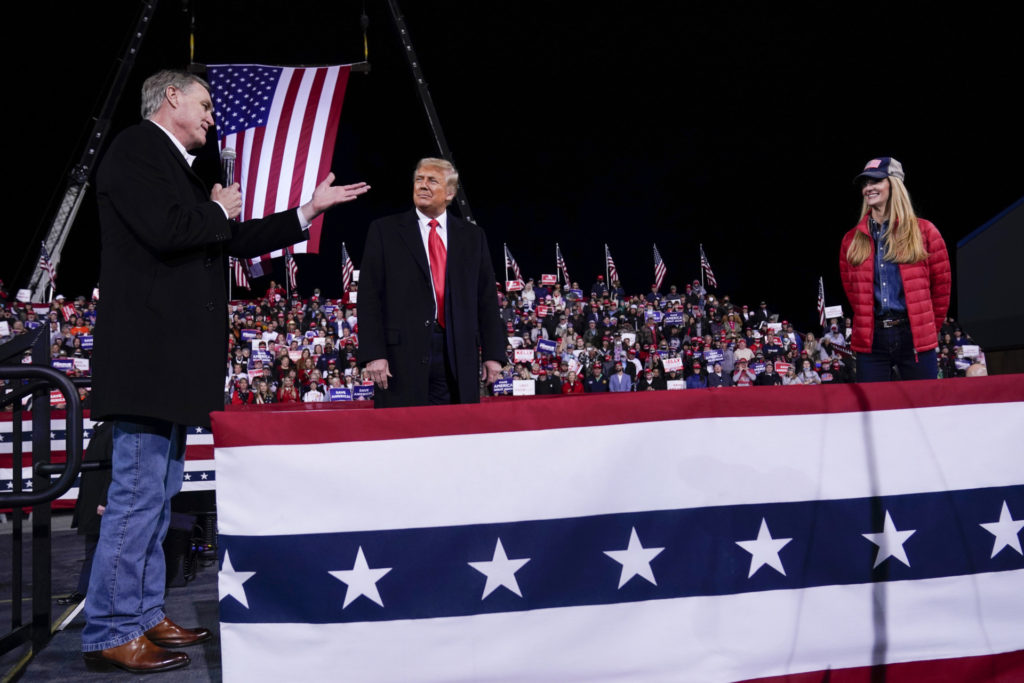 Now-President Joe Biden defeated Trump by around 12,000 votes out of nearly five million cast in Georgia in 2020, but the results were marred with controversy as Trump claimed repeatedly that they had been “rigged” in the wake of numerous states loosening their election restrictions because of coronavirus.

Trump has taken aim at Kemp specifically for complacency with the election process. He blames the governor for a consent decree Secretary of State Brad Raffensperger (R) signed off on in March 2020 that had served as a court settlement between Raffensperger and the Georgia Democrat Party related primarily to signature verification.

Trump has also targeted Kemp for not calling a special session after the November election — but before Perdue’s highly competitive January 5 runoff race — so that the state legislature could choose its own separate set of college electors. Kemp argued at the time that the move would have been unconstitutional and “immediately enjoined by the courts.” Perdue did not display any public objections to Kemp’s handling of Trump’s accusations in the midst of his own race.

If the new ad of Trump attacking Kemp is any indication, the Republican primary for the governor’s race is gearing up to become a heated battle between Perdue and Kemp. The two are both well-known names in Georgia performing strongly in early polls, although Kemp currently holds a slight edge.

A Quinnipiac poll published last week revealed Kemp was leading Perdue by seven points but that both candidates were neck-and-neck with Democrat gubernatorial candidate Abrams in hypothetical general election matchups. An Atlanta Journal-Constitution poll, also published last week, did not measure the two Republicans against one another but showed Kemp in a slightly stronger position than Perdue to defeat Abrams.

The primary race for governor takes place in Georgia on May 24.