Raskin took eight months to disclose his wife’s sale of 195,936 shares of Reserve Trust, where she sat on the advisory board. This sale resulted in $1.5 million in profit for Raskin’s wife. 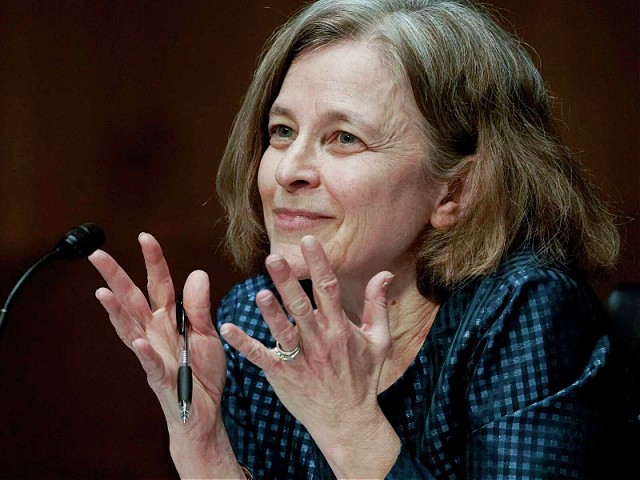 Sarah Bloom Raskin, a nominee to be the Federal Reserve’s Board of Governors vice chair for supervision, speaks during the Senate Banking, Housing and Urban Affairs Committee confirmation hearing on Thursday, Feb. 3, 2022, in Washington. (Ken Cedeno/Pool via AP)

The STOCK Act requires members of Congress to report assets for themselves and their spouses if they’re valued at more than $1,000.

Congress passed the STOCK Act in 2012 after Breitbart News senior contributor Peter Schweizer released Throw Them All Out, which exposed corruption among political officials.

Raskin never disclosed his wife’s Reserve Trust holdings while serving on the advisory board from 2017 to 2019. However, one Republican familiar with the matter said Sarah Bloom Raskin told the Senate Banking Committee she received the stocks in 2017 when she joined the advisory board.

Raskin blamed the late reporting on the death of their son, who died on December 31, 2020, less than two weeks after Sarah Bloom Raskin sold all her Reserve Trust stock. “We lost our son during the reporting period, and I filed the report late,” Raskin told Business Insider.

“It’s a mystery to me how dozens of fin-tech have tried unsuccessfully and how Wyoming’s SPDI charter has been under review [for so long],” Lummis asked. “How did Reserve Trust get there so quickly?”

According to Business Insider:

In 2018, while Sarah Bloom Raskin sat on the advisory board, the Fed granted Reserve Trust unusual access to its master account — an enviable get that allows the fintech company to move money for customers without relying on banks.

“You leave Treasury, you serve on the board of Reserve Trust for two years, their first application for Master Account is denied, but after the first denial, you call the Federal Reserve and Reserve Trust receives a master account,” Lummis said.

“The only state-chartered trust company in the country to get one, and you walk away with a million and a half dollars. Something doesn’t smell right with the way this played out.”