Fourteen of the top GOP consultants and operatives detail how the Republican Party has shifted away from the Chamber of Commerce, the Koch brothers’ network of donor class organizations, National Review, and economic libertarian groups toward Trump’s small-dollar donors, populist-nationalist outlets like Breitbart News, and Tucker Carlson.

These days, it is Trump’s voters, Breitbart News readers, and Carlson viewers that Republicans hope to win over in elections rather than seeking out corporate campaign contributions through endorsements from Heritage Action, FreedomWorks, and the Senate Conservatives Fund.

“You don’t want Breitbart on your ass,” a GOP operative told Axios.

J.D. Vance, the New York Times best-selling author now running for Senate in Ohio, said the party’s shift comes as beltway conservative orthodoxy has been busted through by the likes of Trump, Breitbart News, and Carlson.

“We all owe Donald Trump a great deal for singlehandedly destroying the corrupt globalist and corporatist orthodoxies that previously defined the Republican Party, in favor of a new Republican Party, that is pro-worker and always puts America first,” Vance told Breitbart News.

That shift seeks to increasingly align Republican lawmakers and those running for office with the nation’s largest voting bloc: economic populists who are socially conservative. 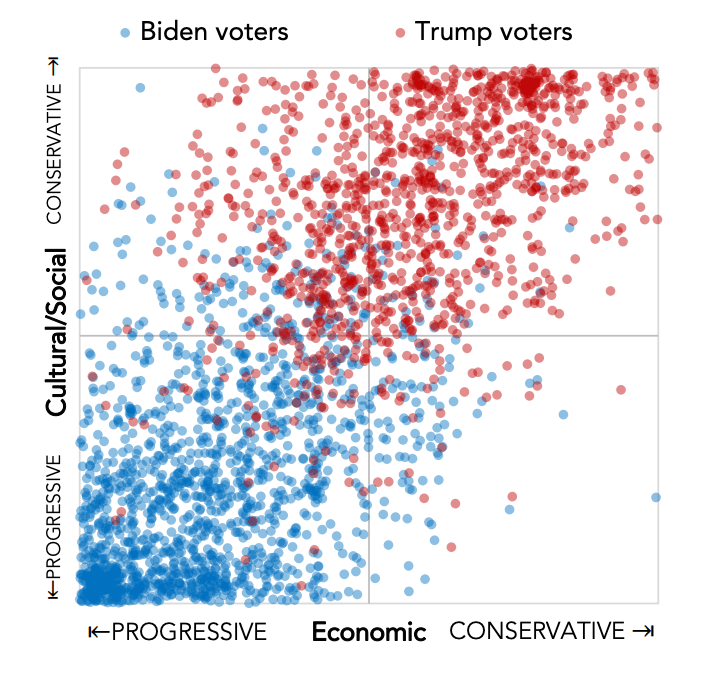 The Republican Party’s connections to the Chamber, while financially still tied, have faded dramatically in recent election years.

“If the U.S. Chamber of Commerce calls you and says ‘We want to endorse,’ You’re like, ‘Please don’t,'” a high-profile GOP political consultant told Axios. Most recently, the Chamber urged President Joe Biden and Congress to double legal immigration levels and provide amnesty to the nation’s 11 to 22 million illegal aliens.

The same goes for the Koch network.

Whereas Republicans once vied for campaign cash from the Kochs, major backers of mass immigration and job-killing free trade, candidates try to steer clear of the network while running against open borders and in support of industrial policy to reshore America’s manufacturing base.

“… none of the operatives we interviewed considered Koch support to be important in 2022,” the Axios report notes.

A new wave of Republicans, though, are fiercely breaking all ties with the old guard.

“You’re getting policy that is untainted and untouched by these beltway, second-tier groups,” McCarthy said. The shift, he said, can be seen in endorsements that long-established groups like the Club for Growth have recently made.

In Alabama, the Club for Growth is backing Rep. Mo Brooks (R-AL) — an avid opponent of mass immigration — for Senate. In Arizona, the organization just endorsed Blake Masters for Senate. Masters’ central issue is advocating for domestic economic policy that ensures working- and middle-class Americans can support their families on a single income.

“Those are not free markets. Those are monopolies.”

On the campaign trail, Witt said Republican primary voters are not interested in endorsements from beltway think tanks. Voters, he said, want fighters for their economic and social interests.

“The Republican Party needs a big wake-up call if they think big business is their friend,” Witt said. “It is often an enemy of social conservatism. The wake-up call is long overdue.”

In Congress, Sen. Josh Hawley (R-MO) has embodied the shift. He is currently trying to get conservative lawmakers on board with plans to break up giant tech conglomerates with vigorous antitrust enforcement. Last month, Hawley introduced a bill to ban members of Congress from trading stocks.

Likewise, Rep. Matt Gaetz (R-FL) made headlines in 2020 when he vowed never to take donations from corporate-funded PACs. Hawley and Sen. Ted Cruz (R-TX) have since followed.

The shift is not just occurring in Washington, D.C.

At the state level, Republican legislators and governors are charting a similar course. Florida Gov. Ron DeSantis (R), for instance, has laid out an ambitious legislative agenda that includes blacklisting companies from receiving state licenses if they are found to facilitate illegal immigration.

Their focus: Mass immigration boosts corporate profits at the expense of Americans.