Leftist Canadian Prime Minister Justin Trudeau endured a second day of intense heckling, insults, and accusations of prioritizing his political power over the health of citizens on Wednesday in a heated session of Parliament.

Trudeau is currently under fire from both the left and right for his handling of the ongoing “Freedom Convoy” protests, which have made their biggest impact in the national capital, Ottawa, but have surfaced in multiple major cities and American border crossings. As of Thursday, truckers are blocking the largest crossing between the two countries – Ambassador Bridge between Detroit and Windsor, Ontario – and have blocked a border crossing in Manitoba. Prior protests had already hampered traffic between Alberta and Montana.

The prime minister made his return to Parliament on Monday after disappearing to an “undisclosed location” at the beginning of the protests, announcing that he had tested positive for Chinese coronavirus. He has yet to enjoy a Parliament session this week that has not erupted in outbursts of disdain towards him – both from conservatives demanding he apologize for his insults towards the protesters and from leftists demanding more federal intervention to end the protests. During one such exchange on Tuesday, an unidentified lawmaker urged the hecklers to stay quiet: “let him answer, he’s not good at it!”

Trudeau Heckled in Parliament: "Let Him Answer, He's Not Good At It!" pic.twitter.com/9YJUclTrfX

While Parliament discussion much of the past week centered around the protests, interim Conservative Party leader Candice Bergen began the question and answer session on Wednesday asking about Trudeau’s most recent call to elections in September, which she branded as “unnecessary” and costly. Canadians had gone to the national polls in 2019, and lawmakers recalled that Trudeau had promised not to call elections as the Chinese coronavirus pandemic continued raging.

“As British Columbia was burning, Afghanistan was falling, and we were in the fourth wave of the pandemic, the prime minister called an unnecessary, 600 million [Canadian dollars, $474.3 million] election to capitalize on this crisis,” Bergen assailed. “According to a senior liberal MP [member of Parliament], a decision was made to wedge, to divide, and to stigmatize … why would he [Trudeau] do this to a country that is already suffering and deeply damaged by so many of his policies?”

Another Conservative lawmaker, Stephen Ellis, accused Trudeau of forcing Canadians out to an election – causing mass gatherings that social distancing enthusiasts condemn – in the name of his personal power.

“Canadians were misled. Instead of prioritizing the health and safety of Canadians, he forced an election,” Ellis asserted. “This begs the question – why did the prime minister jeopardize the health of Canadians to save his own job?”

Trudeau’s government is violating Canadians’ freedoms of speech, expression, assembly, and religion, a demonstrator in Ottawa, ON, told Breitbart News on Wednesday during the Freedom Convoy protest in Canada’s capital city. https://t.co/9OXyP8TBos

Trudeau’s answers to both questions were similar, claiming that vaccination was popular and that the election was important to drown out anti-mandate voices. In both instances, shouting and heckling from other lawmakers drowned out parts of Trudeau’s answers.

The election, he told Bergen, “was an opportunity for Canadians to weigh in on the path forward for our country, on how to continue to fight this pandemic – and what we saw, unfortunately, from the Conservative Party of Canada was a refusal to step up on vaccinations.”

Similarly, Trudeau chided the Party to Ellis, claiming that it was a disgrace that some Conservative lawmakers had not submitted to vaccine product doses, but not addressing social distancing concerns regarding the election.

The prime minister also refused, once again, to answer a direct question on when federal civil rights violations against individuals in an effort to contain the Chinese coronavirus would end.

“Canada has never been so strong and together as we are now,” he replied.

Trudeau faced pressure on the left from the head of the New Democratic Party (NDP), communist lawmaker Jagmeet Singh, who has launched a campaign to discredit the “Freedom Convoy” protests as foreign interference by Americans. Singh has accused former President Donald Trump, without evidence, of leading the anti-restriction protests; compared them to the January 6 Capital riot; and accused malicious “foreign actors” of funding the truckers. 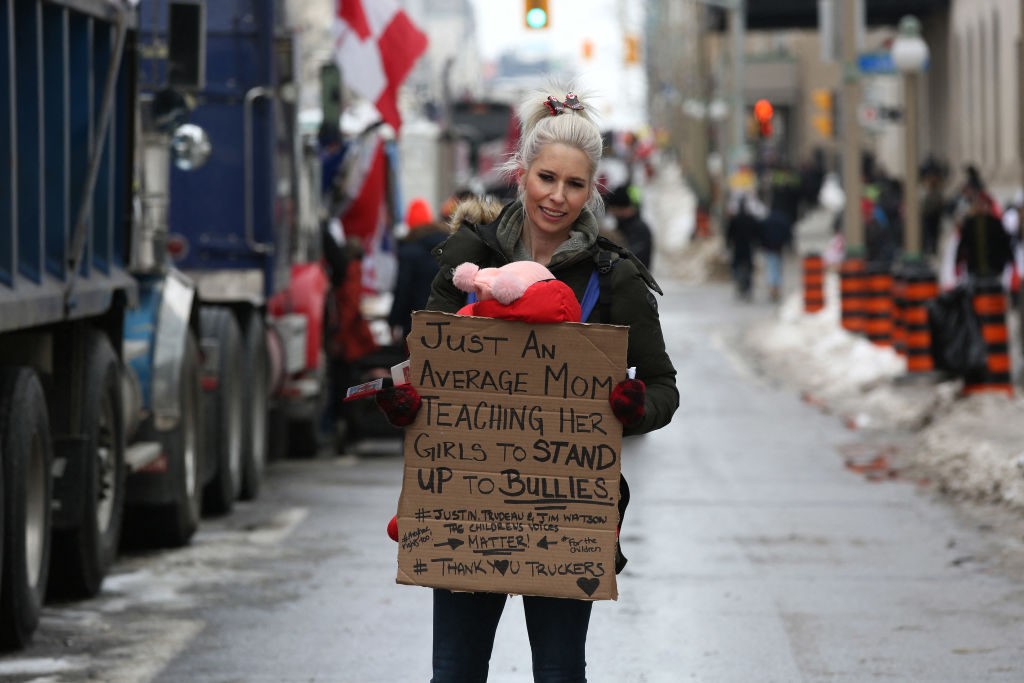 A mother and her daughter protest on Wellington street as demonstrators continue to protest the vaccine mandates implemented by Prime Minister Justin Trudeau on February 9, 2022 in Ottawa, Canada. (DAVE CHAN/AFP via Getty Images)

Singh has also openly accused Trudeau of being absent in leading the country at a time of significant strife.

On Wednesday, Singh asked Trudeau if he would contact American officials to stem the alleged flow of American money to the Canadian protesters, to which Trudeau did not directly answer.

“We are working with partners at all levels of government,” he answered vaguely.

Unlike Singh, Yves-François Blanchet, the leader of the center-left Bloc Québécois, accused Trudeau of needlessly inciting division and anger, a common complaint among the Conservatives. Blanchet observed widespread “malaise with the government’s handling of the pandemic” that he blamed on a “stigmatizing and divisive approach” by Trudeau’s government.

“Is it the prime minister who made the decision to divide and stigmatize for his own gain?” Blanchet asked. 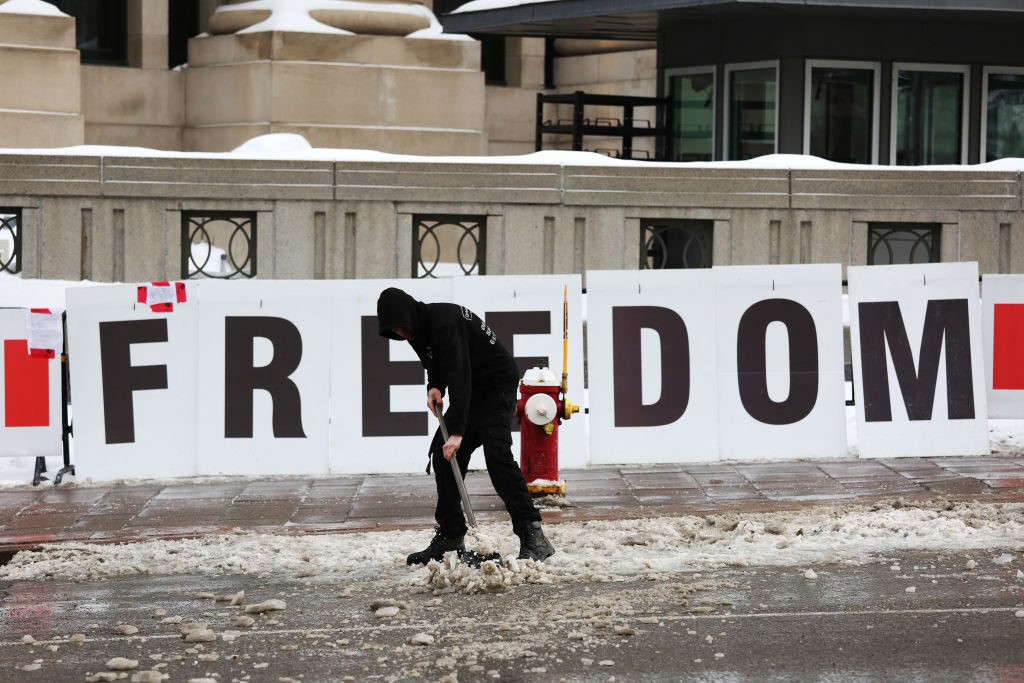 A person clears ice and snow in front of the Senate of Canada as demonstrators continue to protest the Covid-19 vaccine mandates implemented by Prime Minister Justin Trudeau on February 9, 2022, in Ottawa, Canada. (DAVE CHAN/AFP via Getty Images)

Trudeau replied that his government “a decision to unite Canadians around vaccine mandates.”

That decision did not, apparently, unite the country, as “Freedom Convoy” protesters opposed to vaccine mandates – and any other restriction or mandate tied to the pandemic – have gone on nationwide for nearly two weeks. Ottawa Mayor Jim Watson told reporters on Thursday he did not see any immediate end to the protests and had no plans to directly intervene.