Canadian banks will receive the names of people involved in “Freedom Convoy” protests that have descended on the nation’s capital, a first step in a promised financial crackdown on demonstrators being instituted by the far-left government of Justin Trudeau.

Bloomberg reports the Canadian Bankers Association confirmed the Royal Canadian Mounted Police (RCMP) has alerted banks to a list of names and made it available.

The institutions are reportedly still seeking clarity from law enforcement on how to handle the alleged protesters’ accounts, according to people familiar with the matter. But Finance Minister Chrystia Freeland said some accounts have already been frozen, the news outlet reported.

Under the Emergencies Act invoked by this week by Trudeau, law enforcement officials have the ability to arrest people for obstruction of roadways and disruptive behaviour within a no-go exclusion zone. They also have the power to seize vehicles and freeze the same bank accounts.

Conservatives were quick to accuse Trudeau of embracing to emergency powers and of freezing bank accounts without evidence of extremist activity.

“Throughout the last three weeks, the prime minister has failed to take meaningful action to de-escalate the protest here or use any tools that he may have available,” Conservative Leader Candice Bergen said. “Instead, he has jumped straight to the most extreme measure.” 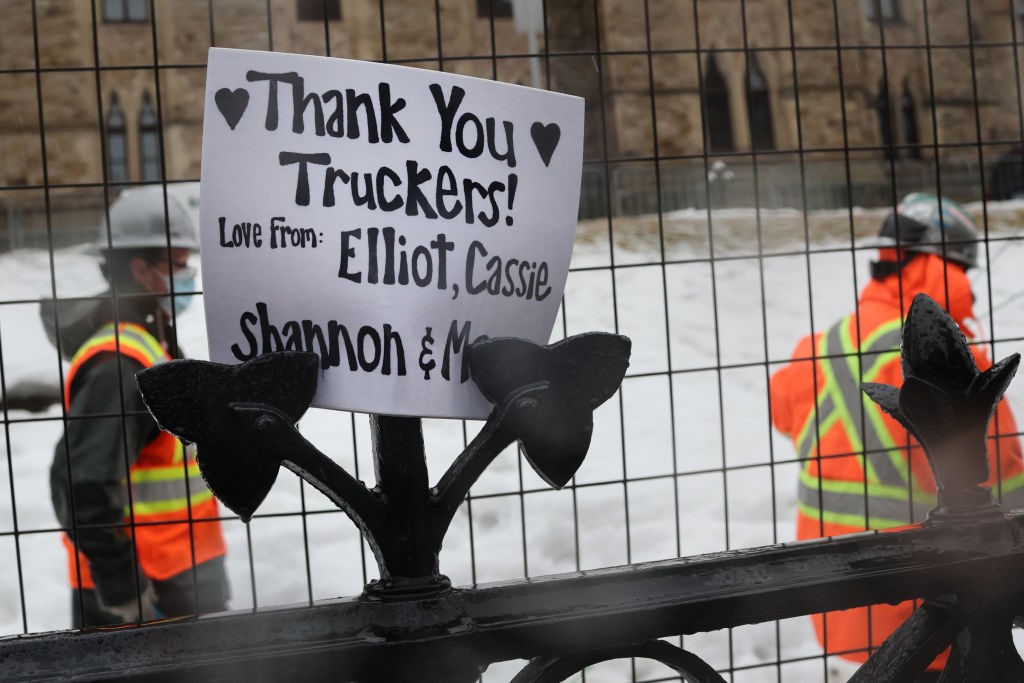 Workers construct a barrier fence around the parliament building as a demonstration organized by truck drivers opposing vaccine mandates continues on February 17, 2022 in Ottawa, Ontario. Canada Prime Minister Justin Trudeau has invoked the Emergencies Act for the first time in Canada’s history to try to put an end to the demonstrations. (Photo by Scott Olson/Getty Images)

Trudeau, who has called the protests against a Covid mandate for truckers and other restrictions an “illegal occupation”, reportedly resorted to the emergency powers following a second weekend of protests.

Bloomberg outlined exactly how the banks will cooperate with the government:

The emergency orders require virtually every participant in the Canadian financial system — banks, investment firms, credit unions, loan companies, securities dealers, fundraising platforms and payment and clearing services — to determine whether they possess or control property of a person who’s attending an illegal protest or providing supplies to demonstrators.

If they find such a person in their customer list, they must freeze their accounts and report it to the RCMP or Canada’s intelligence service, the regulations say. Any suspicious transactions must also be reported to the country’s anti-money-laundering agency, known as Fintrac.

Freeland quickly made plain this step is just the first in a broad range of financial disincentives it will hit protesters with:

Deputy PM Chrystia Freeland: "The names of both individuals and entities as well as crypto wallets have been shared by the RCMP with financial institutions and accounts have been frozen and more accounts will be frozen." pic.twitter.com/iA69DbRJl1

Trudeau formally launched parliamentary debate on his use of emergency powers Thursday, pleading the situation “could not be dealt with under any other law in Canada.”

He said the blockades are “a threat to our economy and relationship with trading partners. They’re threats to supply chains and the availability of essential goods like food and medicine. They’re a threat to public safety.”