Jamarcus Purley, a former staffer who was fired from Sen. Dianne Feinstein’s (D-CA) office, entered the U.S. Capitol and smoked a marijuana blunt in the California Democrat’s office.

Purley — a former legislative correspondent who worked for the senator since February 2017 — was terminated from Feinstein’s office on February 8 for repeated performance issues. His termination letter, which was posted on his Instagram using the alias “Rocky Guevara,” reads:

Due to repeated failures to perform the duties of your job, communicate with supervisors, appear in person or in virtual meetings for work, or appear when directored to discuss problems with your job performance, the office of Senate Dianne Feinsttien is terminating your employment, effective immediately.

As you are aware from past discussion and correspondence, you have made numerous significant mistakes over the past year in office, to include ignoring emails from groups in your portfolio, routing failing to write constitutent letters, and send other letters without following the office protocols for review on multiple occasions.

Under his “Rocky Guevara” alias, he posted a video on Youtube last week of him smoking a marijuana blunt in Feinstein’s office, proceeding to dance and jump on couches as he continued to smoke marijuana:

Purley also posted the video on Instagram describing how he entered Feinstein’s office, despite being terminated from her office, and smoked marijuana. The post has since been deleted:

so i took some shrooms yesterday and had a major discovery. i realized the funniest shit about the u.s. government is that i can just put on a suit and walk straight into the u.s. capitol and smoke a blunt in feinstein’s office even though i was fired 2 weeks ago and walk straight out that bitch because i went to stanford, oxford, and harvard and therein lies the problem 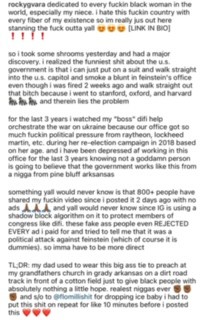 He claimed Feinstein helped “orchestrate” the “war on Ukraine” because “our office got so much fuckin political pressure from raytheon, lockheed martin, etc. during her re-election campaign in 2018 based on her age.”

yall know exactly why this narcissist fired me. if yall really gave a fuck quit your job and stop leaving this shit to black people

Purley breaking into Feinstein’s office and smoking marijuana after his termination comes at a time when Capitol Hill security has been increased and scrutinized.

After the January 6 protests, fencing was installed around the U.S. Capitol for months. Fencing will be reinstalled for President Joe Biden’s State of the Union address Tuesday as law enforcement remains concerned about potential demonstrations and truck convoys creating traffic in Washington, DC.

Rep. Jim Banks (R-IN), the Republican Study Committee (RSC) chairman, has criticized Capitol Police leadership for the chaos that unfolded on January 6, believing it to be a massive security failure.

The House Administration Republicans also wrote they have “strong reason to believe” claims about how the USCP intelligence staff has surveilled and made “background checks” on people with whom lawmakers planned to meet.

Despite the USCP’s focus on increased security ahead of the State of the Union address, a disgruntled former Feinstein staffer entered the senator’s office and smoked marijuana in violation of federal law.

Feinstein’s office did not respond to a request for comment regarding the incident.