Michigan Attorney General Dana Nessel (D) wants the Biden administration to intervene in the dispute over the state’s Line 5 oil pipeline and shut it down because keeping the pipeline open could result in an oil spill, Nessel says.

Nessel told the Royal Oak Area Democratic Club during its March monthly meeting that the Department of Transportation, led by Secretary Pete Buttigieg, has jurisdiction over federal pipeline regulations and could therefore use its authority to close Line 5, according to a video of Nessel’s remarks to the club, which the conservative group Michigan Rising first provided to Breitbart News.

Nessel said, “I do wish that the Biden administration would be even a fraction as vocal about the importance of shutting down Line 5 as Justin Trudeau and his government have been about, you know, maintaining a pipeline that has outlasted its lifespan by, you know, two times.”

The Line 5 pipeline, which has operated for more than 60 years, runs from Superior, Wisconsin, to Sarnia, Canada. For a small stretch in Michigan’s Straits of Mackinac, which connects two of the Great Lakes, the pipeline separates into two pipelines, which sit at the bottom of the water.

Nessel contended that if Line 5 were shut down, “We know that the impact on gas prices in the state of Michigan would be incredibly minimal.” Nessel added that “the thing that would affect gas prices,” which are currently at record highs, is a rupture in the pipeline that results in what she said would be a multibillion-dollar cleanup response.

Nessel and Gov. Gretchen Whitmer (D) sued to shut down Line 5 in 2020, but Enbridge, the company that owns the pipeline, has fought back with its own legal arguments, according to the Engineering News-Record. The magazine detailed that Enbridge has proposed a solution to create a tunnel for the Straits of Mackinac portion of Line 5 to remove the threat of oil spillage into the Great Lakes.

Nessel’s comments come after President Joe Biden began his presidency by declaring in no uncertain terms a “climate crisis,” halting new oil and natural gas leases on public lands and revoking a critical permit for the Keystone XL pipeline project. Environmentalists applauded the pipeline project death blow at the time, claiming the pipeline would have moved “dirty energy” from Canada to the U.S. The same groups have continued to push for Line 5 to see a similar fate.

Nessel echoed to the local Democrat club the same messaging as the Biden administration as she advocated for ending Line 5, saying, “The Trudeau administration has been very vocal about wanting to make sure that that they can provide as much, you know, dirty oil to Canadian citizens as possible, because that’s who Line 5 benefits, not us here in Michigan.”

She added, “It benefits the Canadians.” 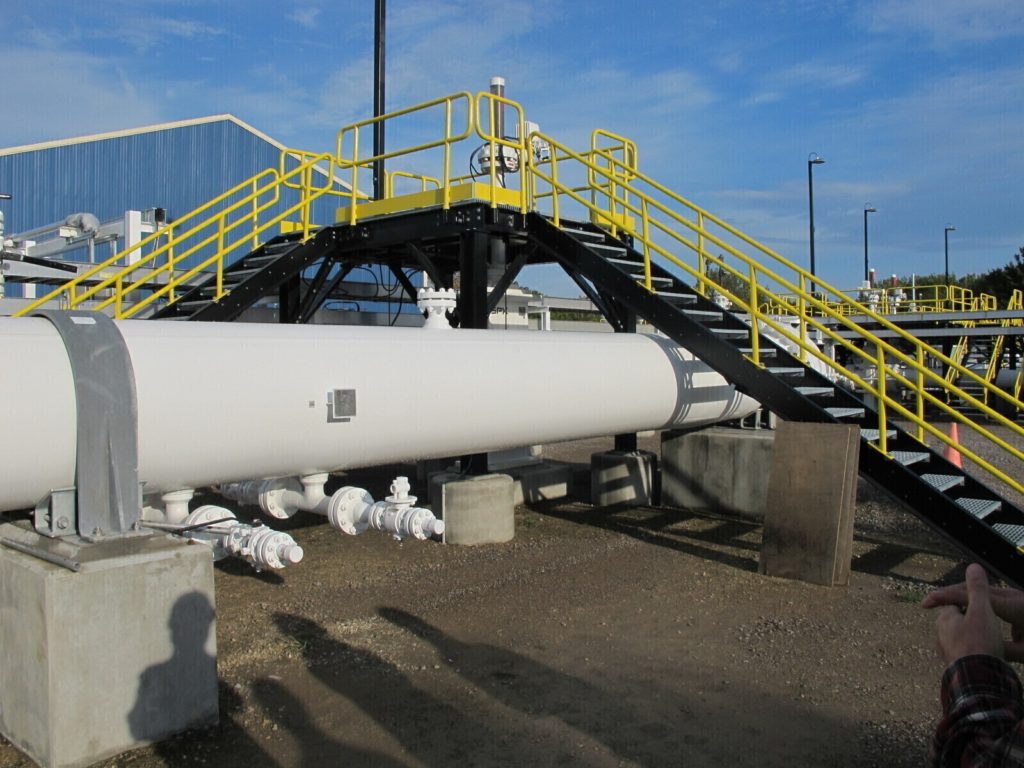 Enbridge counters, however, that “Line 5 supplies 65% of propane demand in the Upper Peninsula, and 55% of Michigan’s statewide propane needs.”

In terms of costs, one study, conducted by the Consumer Energy Alliance, found that “overall, the [Line 5] closure could increase regional fuel prices by 9.5% to 11.7%, if the fallout from prior disruptions to refineries due to natural disasters is any indication,” according to the Detroit News.

The outlet noted the National Wildlife Federation disputed that study, claiming, “It was not grounded in fact.”

Brendan Williams, president of the fuel supplier PBF Energy, told Breitbart News last May that closing the pipeline “would be devastating for the region” and noted that the amount of crude oil moving through Line 5 is “the equivalent of 40 percent of the crude capacity of regional refiners.”

The White House said in November that a study was underway to explore the impacts of shutting down Line 5.