The Gaza-ruling Hamas terror group has threatened to go back to carrying out suicide bombings and to “burn down” Israeli cities if Israel targets its senior members.

“We will burn the cities in [the country’s] center and launch missiles at Tel Aviv and Gush Dan if Israel acts on its threats, those of which surpasses the enemy’s imagination,” Hamas warned, according to a translation by The Times of Israel.

“The return of assassinations means the return of the explosive operations inside [Israeli] cities,” Hamas told Egyptian mediators.

It said that targeting its leadership, especially its leader in Gaza Yahya Sinwar (pictured), would prompt an “unprecedented response” and a “regional earthquake.”

This is who Hamas is. https://t.co/YNDh8nBLej

Last year’s 11 day conflict with Hamas in May, in which more than 4,300 rockets were launched from Gaza into Israeli population centers, “will be but an ordinary event compared to what the enemy will witness,” a Hamas spokesperson warned.

Israel has targeted senior Hamas leaders in the past in retribution for acts of terror. 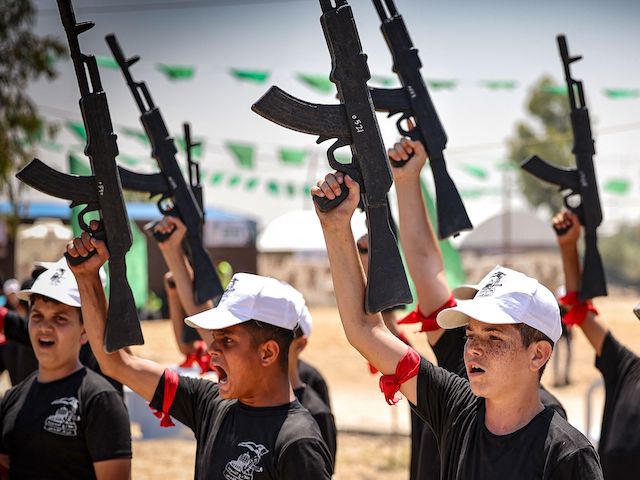 Palestinian youths chant slogans as they raise training rifles during a military summer camp organized by the Hamas movement in Gaza City, on June 26, 2021. (Mahmud Hams/AFP via Getty)

“Their response in the last few hours only reminds us all of who begged for a ceasefire,” during war in May, he said.

Sinwar, this week threatened that if Israel “violates” the Al Aqsa Mosque, it would launch another war.

According to the Haaretz daily, the suspects of a terror attack on Independence Day that left three people dead in the city of Elad, were said to have been inspired by an incendiary speech by Sinwar calling on Palestinians and Arab Israelis to carry out terror attacks.

Let this sink in: Hamas leaders use Twitter to encourage violence against Israel while former President Trump is permanently banned. https://t.co/vR8aUcltmC