President Joe Biden’s new press secretary Karine Jean-Pierre has a history of calling out America’s racism throughout her career in politics and activism.

“I just think that America has a really big problem with race. And it’s very real and we have yet to deal with it,” he said in a PBS interview with Bonnie Erbé in 2019.

After former President Donald Trump won in 2016, Jean-Pierre wrote her memoirs and spoke about the problems of racism in America during her book tour.

“I always say, if you’re not white, male, straight, or wealthy you’re under attack, I mean there is a target on your back,” she said.

Before working for Biden. Jean-Pierre embraced the more activist side of politics by taking a job at Moveon.org after a history of working with some of America’s most famous Democrats.

She worked for scandal-ridden political figures such as Sen. John Edward and Rep. Anthony Weiner as well as Democrat champions like President Barack Obama. The daughter of Haitian immigrants, Jean-Pierre was raised in New York City and is currently living in the Washington, DC, area in a domestic partnership with CNN’s Suzanne Malveaux. 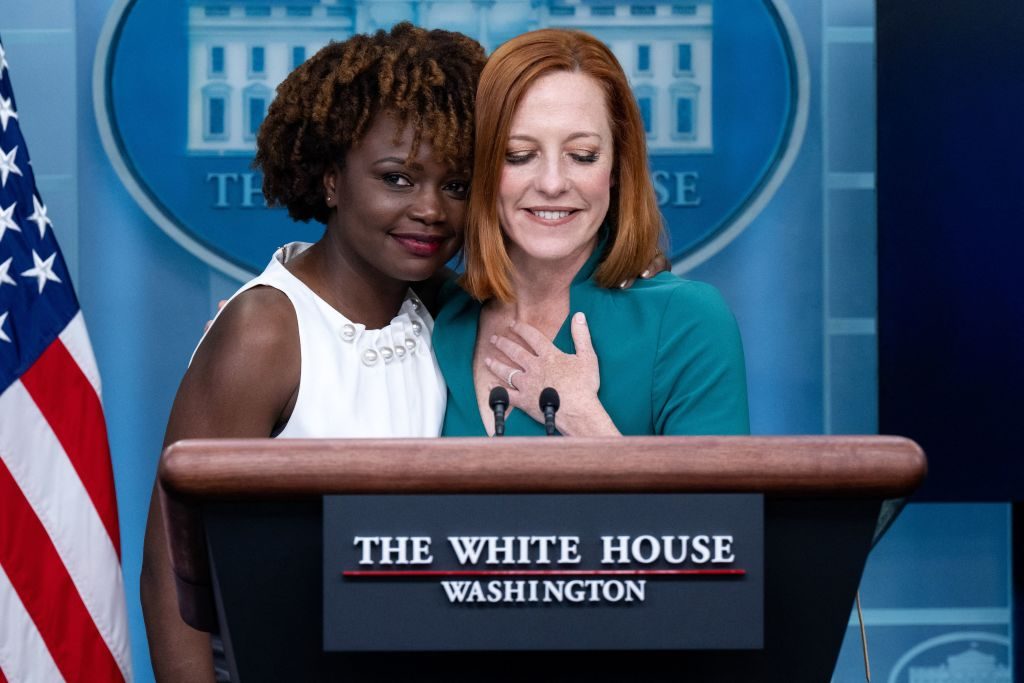 But she said she still experienced racism despite working in America’s most liberal cities.

“I think when you are a person of color when you are a black woman, you experience it every day,” she said after Erbé asked her about experiencing racial prejudice in America. “It’s as simple as walking into a store and people look at you and wonder do you belong in the store.”

“It happens every, every day,” she added.

She said she did not want to blame Trump for racism, noting it had existed in the country for a long time, but said Americans appeared more comfortable about being openly racist.

“What he has done is he has made it blatantly, people are just overt about it in a way that we have never seen before,” she said.

She spoke of Republicans running for office after Trump who she said were openly racist.

“We saw candidates in this last election, who were proud to be white supremacist, white nationalist, talking about purging, and we need a white power, white America,” she said.

“I mean this is what we were hearing from some of the candidates and they were in the Republican Party.”

She noted the Republican Party denounced those candidates but indicated that it was Trump who made them more comfortable.

Joe Biden hired senior adviser Karine Jean-Pierre, who said no one who has been "accused" of sexual impropriety should run for public office. https://t.co/BA0vOuQOv1

“We saw them across the country and we had never seen that before or hadn’t seen it in a very long time,” she said, comparing it to the “Jim Crow era” of the past.

During a book event with MSNBC’s Joy-Ann Reid, Jean-Pierre urged an old white male asking about how to get involved to join Moveon.org and “become an ally” for minorities.

She asked him to read the book “How to Be an Anti-Racist,” by Ibram X. Kendi a book that argues the existence of “systemic racism” in America and demands people to do more about it than not just “not be racist.”

“We need more people like you who look like you to really get into it with us,” Jean-Pierre said to the man.

She thanked him for coming to her book event, noting it was evident that he wanted to get involved.

“I think there is a question of how to get more people to come in who are not a person of color, right? Who’s not a woman right?” she asked.

She called out the current political climate and “all these horrible ‘isms” that Trump had appealed to during the 2016 election.

“Racism, bigotry, homophobia, xenophobia, misogyny that existed way before Trump got here, and that is something we just have to continue to remember,” Jean-Pierre said. “He touched on something that was there, that was very painful and gave it a whole new life in a very public way.”

She urged everyone at the event to get involved with the 2020 election, warning that if Trump was re-elected it would be the end of the country.

“This is a five-alarm right here. If we don’t do this now and today and the next 12 months, that’s it,” Jean-Pierre said. “I really do believe that’s it.”