Rep. Claudia Tenney (R-NY), along with other Republican lawmakers, called upon billionaire Elon Musk to restore Twitter as a platform that “protects and champions” free speech while upholding U.S. law that prohibits providing services and support to U.S.-designated officials and groups of Iran — the largest state sponsor of terrorism worldwide.

In a letter penned to the likely soon-to-be owner of social media giant Twitter, Republican Congresswoman Claudia Tenney of New York along with several other lawmakers called upon the Tesla CEO to uphold U.S. law by preventing certain Iranian figures and organizations from utilizing Twitter to further their aims.

The letter begins by describing Musk’s recent acquisition of Twitter as an “opportunity for transformational change” of the platform while recognizing that the Iranian regime currently employs Twitter “to upend free societies and threaten violence.”

“This is a chance for you to restore the platform so it once again protects, values, and champions free speech,” the letter reads. “It is also a chance for you to correct a longstanding concern regarding the platform’s provision of digital services to sanctioned entities, like those affiliated with the Islamic Republic of Iran, who are responsible for, among other things, the murder of American citizens.”

Calling it “unacceptable” that U.S.-designated Iranian entities use Twitter freely “despite U.S. laws and regulations that prohibit the provision of goods and services to them,” the lawmakers request a review of Twitter’s business practices and policies in order to “ensure full compliance with U.S. laws prohibiting the provision of services to U.S.-designated entities.” 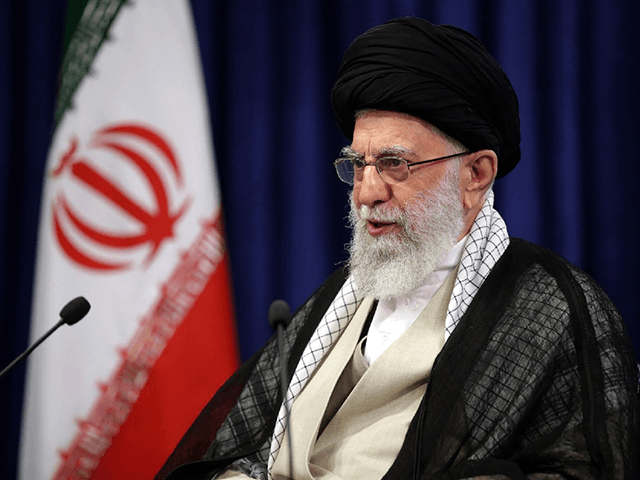 Iran’s Supreme Leader Ayatollah Ali Khamenei speaks on television on Friday, in a handout picture provided by his office

“Khamenei, in particular, has used the platform to threaten violence, call for the eradication of the State of Israel and the Jewish people, and promote conspiracy theories and disinformation,” the letter states.

The letter continues by emphasizing the value of freedom of speech and the opposition by its signatories to any “arbitrary or political censorship” on the part of the platform.

“Let us be clear: we stand for free speech and do not support arbitrary or political censorship by social media companies. Free speech and the free flow of information on platforms like Twitter are key to maintaining healthy democracies both at home and abroad and we sincerely hope your acquisition of Twitter heralds a new era in this regard,” it reads.

However, the letter continues, such rights are to be distinguished from the “markedly different” issue of aiding designated terrorists, which is “not a question of free speech, but of whether an American company should be providing a service, for which it gives and derives benefit, to designated and terrorist affiliated individual and entities.”

“We believe strongly that the answer is a resounding, ‘No,’ which is why we urge you to examine this issue further and take action to comply with U.S. law,” it emphatically states.

The lawmakers then call to uphold United States law, noting that the Iranian regime’s designation as a state sponsor of terrorism is neither “arbitrary nor political” but based on “well-documented information and evidence, and approved only once subjected to a thorough interagency review by multiple federal agencies.”

“Allowing designated individuals and entities to continue using Twitter to incite violence against American officials and citizens, call for the eradication of the Jewish State and its people, and promote its terrorist proxies, is in flagrant violation not only of Twitter’s longstanding policies, but most importantly of U.S. law,” the letter concludes.

In an exclusive statement to Breitbart News, Rep. Tenney noted that “while free speech and the free flow of information on platforms like Twitter are key to maintaining healthy democracies both at home and abroad, the Iranian regime uses this platform to upend democracy and threaten violence, which is exactly why the regime has been designated a State Sponsor of Terrorism and why many of its officials are on the Specially Designated Nationals list.”

She also called it a “privilege” to lead her colleagues in the effort “to  ensure that the law is upheld and free speech is protected.”

“While Twitter has banned Donald Trump, dangerous Iranian officials, who have been sanctioned by the U.S. for national security purposes, are still allowed to spread their Anti-Semitic message of hate and violence on the platform,” she said.

“I’m calling on him to address the concerning presence of the terrorist Iranian regime on social media,” she added.

“We join these lawmakers in calling on Twitter to stop aiding and abetting Ayatollah Ali Khamenei and other Regime officials,” he said.

Calling it an “open and shut case,” Leib said the social media company should be held accountable for a lack of compliance with U.S. law.

“We applaud Representative Claudia Tenney for leading this letter and the House Republicans Conference Chair, Representative Elise Stefanik for being the lead co-signer,” he said.

“Both of these Representatives, along with their colleagues whom signed the letter are calling on the soon to be owner of Twitter, Elon Musk, to comply with U.S. law that prohibits Americans and American companies from providing services or material support to U.S. designated terrorists or entities,” he added.

Iran, the largest state sponsor of terrorism around the world, has long disseminated antisemitic, anti-Zionist, and anti-American propaganda, with Iranian leaders often denying the Holocaust or threatening the existence of the Jewish state.

Last month, an Iranian official appeared on public television delivering a lecture to foreign students where he questioned the Holocaust, claimed Hitler was Jewish and accused Israel of sexually abusing Arab children and harvesting their organs for the benefit of wealthy “westerners” and “Zionist-Jews.”

In January, a video clip titled “Revenge Is Definite,” threatening the assassination of former President Donald Trump as revenge for the killing of slain Iranian General Qassim Soleimani, appeared on the official website of Iran’s Supreme Leader.

In September, Iranian Armed Forces Spokesman Brigadier-General Abolfazl Shekarchi affirmed that the United States is the Iranian republic’s top enemy while highlighting his country’s commitment to eliminate the Jewish state.

Nevertheless, current nuclear talks in Vienna may see the United States and other world powers provide Iran with economic sanctions relief in exchange for temporary restrictions on its nuclear program.

According to a former State Department official, President Joe Biden’s impending agreement to restore the Iran nuclear deal offers the regime access to $90 billion in foreign currency reserves and sanctions relief to some of the world’s worst terrorists.

In addition to being granted hundreds of billions of dollars, it may likely be used for terror and aggression. The deal also will not prevent Iran from obtaining nuclear weapons.

In March, Russia’s envoy to the Iran nuclear talks admitted Tehran “got much more than it could expect” in the latest iteration of the nuclear deal.

Last week, Rep. Ilhan Omar (D-MN) voiced support for the immediate finalization of the Iran Deal, which she claimed would stave off a Middle East conflict.