The latest Gallup poll found that the overwhelming majority of Americans are not satisfied with the country’s direction as the November midterm elections loom and Democrats admit that there is a challenging “political environment” ahead.

The poll revealed that 83 percent of Americans are dissatisfied with how things across the country are going, while only 16 percent are satisfied and one percent have no opinion.

This marked a six percent decrease in satisfaction with where the country is headed from the Gallup poll taken in April and is the lowest percentage of satisfaction since the January 6 capitol riot over one year ago.

The Gallup poll shows a dire warning to the Democrats who control Washington, DC. President Joe Biden has a job approval of 41 percent, and Congress stays at a stagnant 18 percent. The country is currently going through many crises, with rapidly rising inflation causing the price of everyday goods to quickly go up, the skyrocketing price of gasoline, and baby formula shortages.

“With less than six months to go before the midterm elections, the public’s mood is sour, with few Americans satisfied with the country’s direction and approving of Congress, making the Democratic congressional majority extremely vulnerable,” Gallup acknowledged.

Gallup added, “The likelihood of a dramatic economic turnaround before November’s congressional elections appears slim, which puts pressure on Democrats to persuade voters to keep them in power despite the nation’s current struggles.” 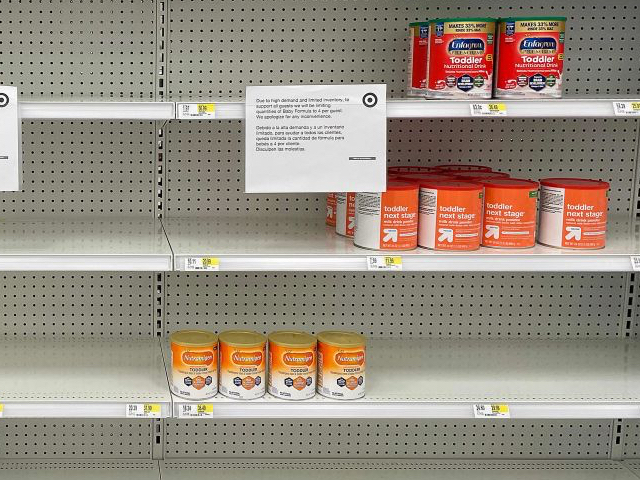 A sign stand next to a small amount of toddler nutritional drink mix at Target in Stevensville, Maryland, on May 16, 2022. (Photo by JIM WATSON/AFP via Getty Images)

This comes as Tuesday’s Punchbowl News newsletter acknowledged that “In private, Democrats acknowledge that it would be difficult to envision a trickier – or more perilous – political environment 168 days before a midterm election than now.”

The newsletter added, “There’s a reason that 30-plus House Democrats are retiring or have already left office this cycle, compared to only half as many Republicans.”

A recent Quinnipiac poll showed Republicans gained momentum in the polls, with 47 percent of registered voters saying they want to see the Republican party in control of Congress as only 43 percent said they would want the Democrat party in control.

The Gallup poll was conducted from May 2 to 22 with a random sample size of 1,007 U.S. adults aged 18 and older. The margin of error was ±4 percentage points and had a confidence level of 95 percent.