A watch party in D.C. for the January 6 Committee hearing drew a few hundred attendees, who gathered around an outdoor screen Thursday night to watch the primetime event play out.

The crowd, situated just beyond the U.S. Capitol building, was mostly relaxed and low-energy, sitting on blankets and folding chairs, some eating ice cream that had been provided.

“The information they’re providing sets up another referendum in the midterms in 2022,” an opening speaker told attendees just before the hearing aired. The speaker noted the committee “can’t get up there and say who to vote and not vote for … but we can,” further underscoring the political nature of the hearing. 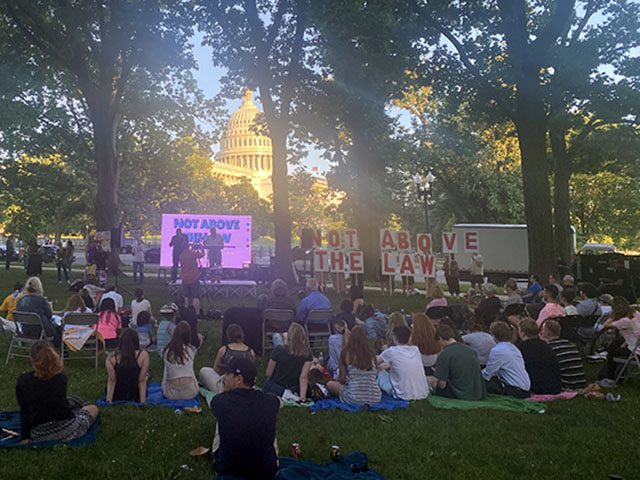 A crowd listens to speakers at the start of a January 6 Committee hearing watch event in Capitol Hill in Washington, DC, July 9, 2022. (Breitbart News)

The watch party, hosted by a group called Public Citizen, was part of a larger network of watch events arranged nationally in partnership with several left-leaning groups to help the hearing “break through the busy news cycle and reach the American public,” per the events’ central website.

“We cannot allow Trump Republicans to successfully cover up one of the greatest attacks ever planned against American’s freedom to decide who governs in our name!” the website adds.

The committee, which consists of seven Democrats and two Republicans selected by House Speaker Nancy Pelosi (D-CA), scheduled its first of a series of public hearings in Thursday’s primetime television slot in hopes of refocusing the public’s attention on the riot that took place at the Capitol a year and a half ago.

Republicans, who almost unanimously believe the committee is invalid and too partisan to be taken seriously, have shunned the hearing and went on a media blitz this week to counter the hype surrounding it.

The hearing itself presented no new evidence pertaining to the riot or former President Donald Trump’s alleged role in inciting it, but at the watch party, the hearing’s testimonies and clips flashing back to the riot were further dramatized when displayed on the outdoor screen with the Capitol building as a backdrop.

At times, the crowd would cheer, though the applause was typically subdued, such as when an anti-Trump remark was made or when committee chair Rep. Bennie Thompson (D-MS) introduced vice chair Rep. Liz Cheney (R-WY):

The next hearing in the committee’s series is scheduled for Monday at 10:00 a.m.