“Show the American people what matters and immediately reject this endorsement,” Hamadeh said in an emailed statement calling out his opponent, who is endorsed by Planned Parenthood — an organization that supports defunding the police. 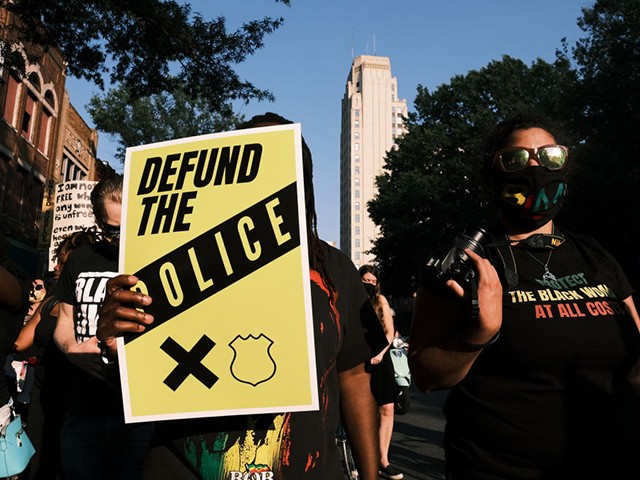 A protester carries a sign that reads “Defund The Police” during the Black Women Matter “Say Her Name” march on July 3, 2020, in Richmond, Virginia. (Eze Amos/Getty Images)

“The Attorney General serves as the top law enforcement officer of their state. The privilege allows oversight of some of the bravest individuals in our nation that put their lives at risk every single day,” the statement reads. Hamadeh then questions, “How can a state’s top law enforcement officer align with and receive support from an organization that openly encourages the demise of the very people they are supposed to represent and protect?”

“As Democrats continue to flaunt claims that distract voters instead of focusing on real issues, Planned Parenthood has become a key figure in this election cycle. An organization – who openly supports ‘Defunding the Police,'” Hamadeh stated.

In fact, Axios reported last month that candidates in Arizona looking for its endorsement are now required to reject any financial support from police unions and law enforcement agencies. Chris Love, immediate past board chair of Planned Parenthood Advocates of Arizona, also said on social media that police would enforce abortion bans and that “Cops are NOT our friends in this fight.”

“The Defund the Police movement propelled an absurd and dangerous narrative. It is important, now more than ever, to offer our full support to law enforcement individuals and agencies,” Hamadeh continued. He noted that the “dangers” law enforcement officers face are “consistently increasing with crimes against officers.”

Despite all of this, Mayes told Axios that she does not support the efforts to defund or abolish the police and claimed to be the only attorney general candidate that is “pro-law enforcement, pro-public safety and pro-reproductive rights.”

She added that despite what outside groups do, she looks forward to working with police agencies in Arizona if elected and “always” will put “Arizonans’ health and safety first.”

However, while Mayes appears to support law enforcement, she still displays the Planned Parenthood Advocates of Arizona endorsement on her website.