The UK Guardian on Monday found ominous portents for New Zealand Prime Minister Jacinda Ardern’s far-left Labour party in the latest round of local elections, which looked like a grassroots taxpayer revolt against the once-popular PM and her authoritarian policies — or a “lurch to the right in most major centers,” as the Guardian put it.

The remarkable thing about these elections was that merely identifying candidates as members of Ardern’s party was apparently enough to sink them. Instead of painting mustaches or scribbling dirty words on campaign posters for Ardern’s candidates, vandals simply wrote “LABOUR” on them, as though the very name of the party had become an obscenity. Left-wing candidates who were not actually members of the Labour Party denounced the labels as a scurrilous “attack tactic,” which suggests they knew it would work.

Candidates endorsed by Ardern got clobbered:

[Independent progressive Efeso] Collins in Auckland and Paul Eagle in Wellington both received the personal endorsement of Ardern, and both received a drubbing in mayoral elections. Collins, once a favourite to win, lost by a margin of 60,000 votes to conservative candidate Wayne Brown. In Wellington, Labour’s Eagle came in a dismal fourth place, securing less than half of the votes of Greens-backed winner Tory Whanau. In Christchurch and Dunedin, cities swung right, electing mayors more conservative than their incumbents.

Various New Zealand commenters told the Guardian that voters appeared demonstrably upset by the combination of a slipping economy, the aftermath of Ardern’s authoritarian coronavirus policies, and aggressive Big Government policies on matters such as housing and infrastructure construction.

Left-wingers strove to minimize the political fallout by dismissing the revolting taxpayers as rich old white people with an unthinking “reactionary” resistance to change, and suggested the local election losses were partly due to disillusioned “progressives” staying home because they think Ardern is not moving quickly enough to restructure New Zealand’s economy and society.

Max Rashbrooke of the Institute for Governance and Policy Studies said the local elections “felt a bit like a ratepayer revolt,” and perhaps a “vote against ambition,” or at least the kind of overweening ambition that statists often lack the competence to deliver on.

“People, politicians who were promising change or had a big vision for things haven’t done particularly well, and it feels like there was a strong vote for small targets, low ambition, promises of getting the basics right,” Rashbrooke said.

While the Left struggled to portray New Zealand’s unhappy voters as selfish rich people, Fortune on Wednesday found outrage brewing among farmers over Ardern’s “fart tax” — a tax on “the methane burped out by cows and sheep, as well as the nitrous oxide found in livestock urine,” as part of the prime minister’s bid to reduce emissions by ten percent as of 2030. 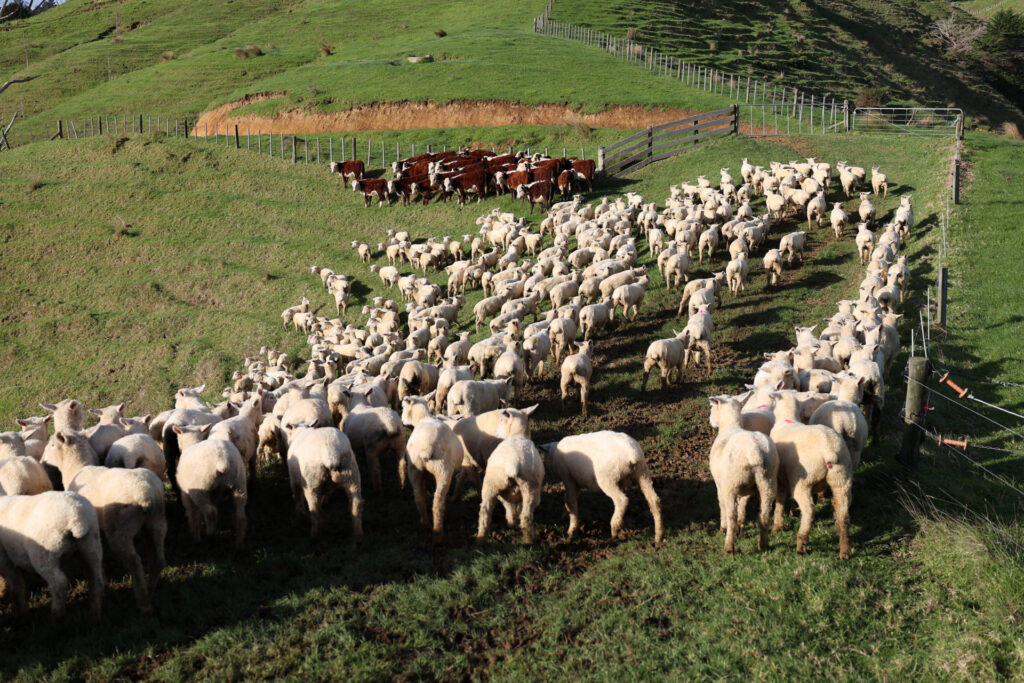 A flock of lambs and a herd of Hereford weaner calves are moved between paddocks on the Dill farm in Kaipara Hills on June 14, 2022 in Auckland, New Zealand. (Fiona Goodall/Getty Images)

“No other country in the world has yet developed a system for pricing and reducing agricultural emissions, so our farmers are set to benefit from being first movers. Cutting emissions will help New Zealand farmers to not only be the best in the world but the best for the world,” Ardern declared at a press conference on Tuesday.

The world-first fart tax will begin charging farmers in New Zealand for agricultural emissions—including the methane burped out by cows and sheep as well as the nitrous oxide found in livestock urine—in some form by 2025. https://t.co/KsvOqU7kN7

Farmers who stand to be ruined by the fart tax were rather less pleased with the fragrance of Ardern’s proposal, a warmed-over scheme from 20 years ago that was defeated back then by an army of irate farmers whose protest march on Wellington included their cows.

“We didn’t sign up for this. It’s gut-wrenching to think we now have this proposal from the government which rips the heart out of the work we did,” complained Andrew Hoggard, president of the lobbying group Federated Farmers.

Hoggard said the government’s tax plan would end up reducing the amount of land available for sheep and beef by 20 percent by 2030 because it incentivizes eliminating livestock and planting vegetation instead. Other farm groups complained the government is not properly recognizing the large volume of carbon-absorbing forest they are already cultivating on their grazing land.

Dairy farmer James Clairmont told the Financial Times on Thursday that farmers could end up marching once again in protest of the fart tax. He said it was difficult to understand why Ardern was “hell-bent” on reducing emissions and loading huge new costs onto farmers when they are already paying sky-high prices for fuel, fertilizer, and other vital supplies.

“It’s bloody hard at the moment. We’re on the road to nowhere,” Clairmont said.

The Financial Times noted Ardern’s popularity has plummeted rapidly during the two years of her “Fortress New Zealand” coronavirus response, knocking 24 points off her approval rating during the past two years.

Polling analysts pointed to public frustration over Ardern’s long delay in reopening New Zealand’s border, her rough handling of protests against vaccine mandates, and more recently the high cost of living, which rose sharply after Russia invaded Ukraine. A swift rebound in the tourism industry could be Ardern’s best hope of shoring up her poll numbers.