The Saturday night shooting in Colorado Springs’ Club Q occurred despite the fact that the state adopted stringent gun controls in the months and years following the December 14, 2012, attack on Sandy Hook Elementary School.

In the months immediately after the Sandy Hook attack, Colorado’s Democrat lawmakers pushed universal background checks through the legislature. Democrat Gov. John Hickenlooper signed the legislation into law on March 19, 2013.

Days prior to the bill being signed, Reuters reported Colorado Republican House minority leader Mark Waller warned, “If the goal is to enhance public safety, this bill won’t do it. If a criminal wants to perpetrate a crime he can still get a gun.”

Hickenlooper signed a ban on “high capacity” magazines into law at the same time he signed universal background checks.

USA Today noted that “Colorado passed a so-called ‘red flag’ law in 2019 that allows police to seize firearms from individuals deemed a risk to themselves or others.”

Eagle County Sheriff James van Beek slammed the red flag law as “ludicrous,” suggesting it treats gun owners like “criminals” while ignoring the reality that “a disturbed mind will not be deterred by the removal of their guns.”

Florida instituted a red flag law just weeks after the February 14, 2018, Parkland high school shooting that killed 17 people. Yet months in later, on January 23, 2019, five people were killed in an attack on a Sun Trust Bank in Sebring, Florida. 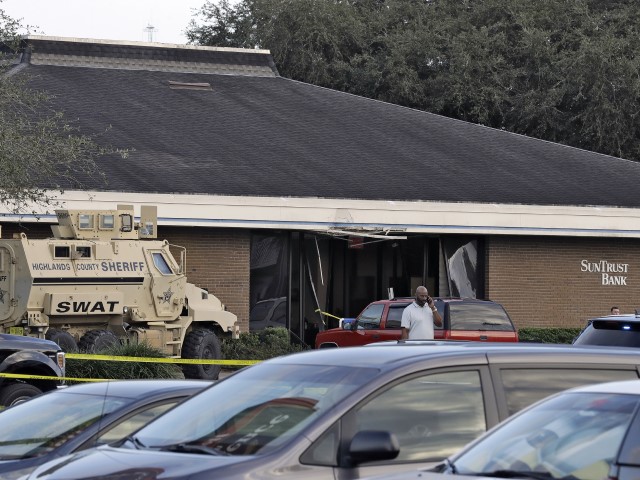 A Highlands County Sheriff’s SWAT vehicle is stationed out in front of a SunTrust Bank branch, Wednesday, January 23, 2019, in Sebring, Florida, where authorities say five people were shot and killed. (Chris O’Meara/AP)

For example, Giffords’ gun control group claims, “Universal background checks are essential to close deadly loopholes in our laws that allow millions of guns to end up in the hands of individuals at an elevated risk of committing violence each year.”

Colorado has universal background checks, a red flag law, and a “high capacity” magazine ban. In the end, however, the Club Q attack was stopped when a patron grabbed the attacker’s handgun, took it away, and hit the attacker with it.