Loudoun County Public Schools was derelict in its duty to students and failed to cooperate with a special grand jury investigation, according to Monday’s grand jury report.

The special grand jury was empaneled by Virginia Attorney General Jason Miyares (R) in response to national outrage at the school district for what appeared to be the sexual assault cover-ups of two female students by the same male “gender fluid” student.

In May and October of 2021, the male student sexually assaulted two female students in the district. The perpetrator was allowed merely to change schools after the initial assault — at Stone Bridge High School — where the skirt-clad male sodomized a ninth-grade girl.

Administrators in the district were self-interested, according to the report, which alleges that the second assault — at Broad Run High School — could have been prevented.

“It is our considered judgment that the October 6, 2021 sexual assault at Broad Run High School never should have occurred,” the report states. “Had any number of individuals across a variety of entities spoken up or realized a serious problem was brewing regarding earlier incidents at BRHS then the sexual assault most likely would not have occurred. But nobody did.”

Indeed, after only five months in his new school, the assailant “abducted” his next victim from the hallway, forcing her into an empty classroom where he sexually assaulted and nearly suffocated her.

“There were several decision points for senior LCPS administrators, up to and including the superintendent, to be transparent and step in and alter the sequence of events leading up to the October 6, 2021 BRHS sexual assault,” the report continues. “They failed at every juncture.”

Administrators appeared not only delinquent in the response, but also purposefully ignorant of the realities of the situation.

After the first assault, the father of the victim spoke up at a school board meeting expressing his concern with district policy that allowed boys to use girls’ restrooms in accordance to their “consistently asserted gender identity.” The father argued that such a policy would lead to more female students being assaulted, just like his daughter. The school board not only turned a blind eye, but also explained that no sexual assault had occurred in a restroom — including that of his daughter. The father was then removed from the room by police.

The warning signs for the second assault were present, according to the report, which should have been flagged by teachers and administrators.

In early September 2021, the perpetrator assaulted a female student in English class by grabbing her shoulder “really hard” and asking if she posted nude photographs online.

After a Title IX report was filed, the superintendent and chief of staff “expressed concern” but did not take action, leading the grand jury to conclude that the district “bears the brunt of the blame” for the second assault.

Over the course of the investigation, the district attempted to stymie the grand jury, filing a lawsuit to declare it unlawful after initially agreeing to cooperate.

“We expected these public servants to provide clarity, transparency, and willingness to report truthfully to their constituents. Instead, we were met with obfuscation, deflection, and obvious legal strategies designed to frustrate the grand jury’s work,” the report said before providing a list of district attempts to obstruct the investigation.

On Monday afternoon, school board Vice Chair Ian Serotkin offered a strange perspective on Facebook, saying, “We are pleased that the Special Grand Jury’s extensive investigation found no evidence of criminal conduct” — a response many view as an attempt to spin the damning report into a win for the district. 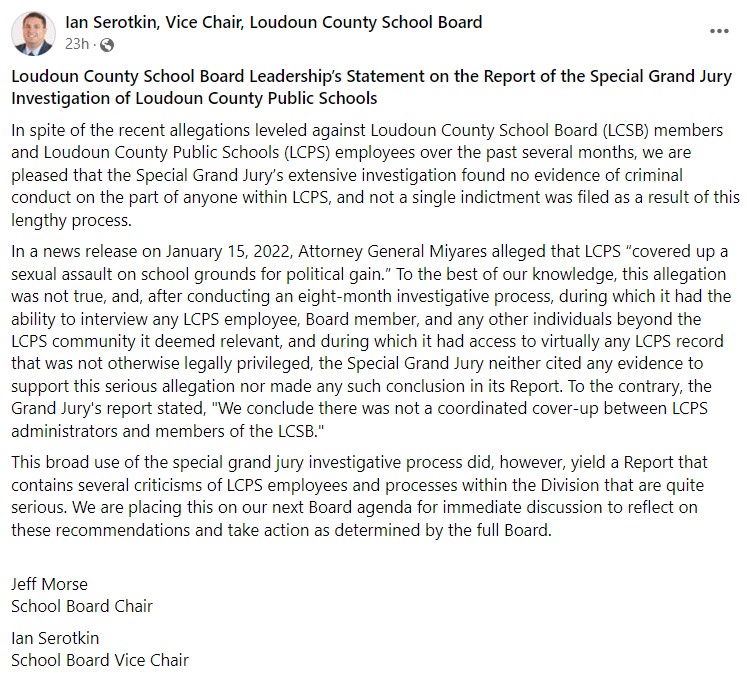 Despite Serotkin’s bristling at Miyares, the Old Dominion’s attorney general praised the “professionalism” of the panel.

“In the face of intense public speculation, the members were incredibly engaged, worked tirelessly, and spent countless days away from their families and jobs to conduct a thorough investigation into Loudoun County Public Schools,” Miyares said of the grand jury’s work. “I encourage everyone to read their report, and look forward to the positive change in LCPS resulting from their work.”