President Joe Biden participated in a toast to news of his 2024 reelection campaign on Wednesday, after French President Emmanuel Macron learned that First Lady Jill Biden supported the idea.

During the state dinner at the White House last week, Jill Biden told Macron that she and Joe Biden were absolutely ready for another run, according to the New York Times, which cited “two people with knowledge of the discussion.”

Macron turned to Joe Biden and raised a toast to the president’s 2024 campaign, prompting Biden to do the same, the report notes.

It’s the latest sign that Biden, age 80, is not prepared to stand down for a new generation of Democrat leadership, as he hinted he would do during his 2020 presidential campaign.

“Look, I view myself as a bridge, not as anything else,” Biden said in March 2020 on the campaign trail, campaigning with Sen. Kamala Harris (D-CA), Sen. Cory Booker (D-NJ) and Michigan Democrat Gov. Gretchen Whitmer.

“There’s an entire generation of leaders you saw stand behind me,” he continued referring to the younger group of Democrats. “They are the future of this country.”

Biden and his family are expected to discuss the pros and cons of running again, the president and his allies are more convinced than ever that he can succeed in a reelection campaign after Democrats performed better than expected in the midterms. 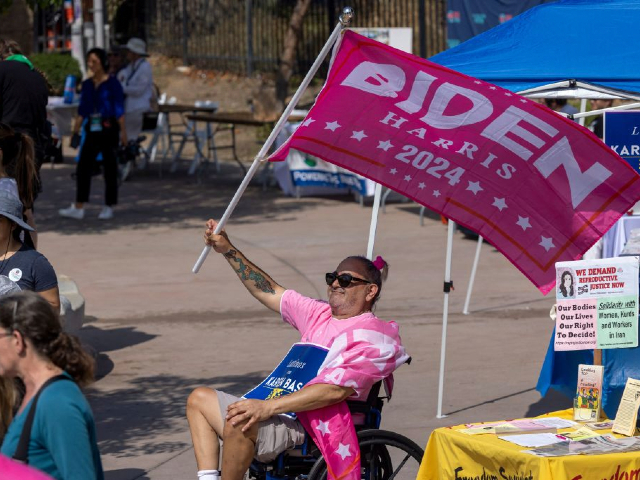 A man in a wheelchair holds a pink flag in support of voting for President Joe Biden in 2024 during the Women’s March Action Rally for Reproductive Rights at Mariachi Plaza in Los Angeles, California, on October 8, 2022. (Photo by DAVID MCNEW / AFP) (Photo by DAVID MCNEW/AFP via Getty Images)

Biden has repeatedly said he intends to run again for president in 2024 but said a more formal decision would be announced in the first part of next year.

The president is already working at promoting his economic message across the country, traveling to states like Arizona, Ohio, and Michigan to promote billions of dollars of subsidies for semiconductor manufacturing companies.

While speaking at a factory in Arizona on Tuesday, Biden conceded that “things are still pretty rough” for American families due to inflation.

But he also argued that there were “bright spots” in the economy that made him optimistic.