The Pentagon has admitted in order to keep enough weapons for its own readiness but also supply Ukraine it was raiding its weapons stockpiles in other countries.

Deputy Defense Press Secretary Sabrina Singh revealed to reporters on Thursday the Pentagon was taking weapons from its stockpiles in Israel and South Korea to meet weapons demand in Ukraine’s war with Russia.

“We are supplying Ukraine pretty regularly with different ammunitions, materials, capabilities and equipment, and part of that is making sure that we can do so quickly. And we have been working with [Republic of Korea] and Israel when it comes to withdrawing from our stocks and communicating that with them,” Deputy Defense Press Secretary Sabrina Singh said.

On whether it meant the U.S. was running low on weapons stockpiles at home, she responded, “I wouldn’t say that. I mean, the Secretary has always said we’re not going to drop below our readiness levels. … We have to go to other sources, other places to make sure that Ukraine has what it needs and to also be able to backfill our own stocks and work on backfilling partners and allies.”

As working class Americans struggle to afford groceries, gas, and even find baby formula to feed their children, Joe Biden has sent $40,000,000,000.00 the U.S. does not have to Ukraine. https://t.co/ugwxKxBpDe

The New York Times reported two days before her remarks that the Pentagon was tapping into its stockpiles in Israel “to help meet Ukraine’s dire need for artillery shells in the war with Ukraine.” The stockpile is for Pentagon to use in Middle East conflicts, and also for Israel to access in emergencies, the paper reported.

With stockpiles in the United States strained and American arms makers not yet able to keep up with the pace of Ukraine’s battlefield operations, the Pentagon has turned to two alternative supplies of shells to bridge the gap: one in South Korea and the one in Israel, whose use in the Ukraine war has not been previously reported.

Breitbart News last week reported on the difficulties the U.S. is having on maintaining its own supplies, supplying Ukraine, and backfilling its own supplies and that of allies also giving weapons to Ukraine — something the Biden administration’s own appointees are publicly acknowledging.

Navy Secretary Carlos del Toro recently told reporters that it would soon be “challenging” to arm both Ukraine and the U.S. Navy. That came after the U.S. Fleet Forces commander expressed frustration with defense contractors missing weapons delivery targets and wanting to help Ukraine but not in a way that would “destroy and put me back into the dark ages.”

The U.S. pulling from its stockpiles in Israel has created a diplomatic dilemma. Israel has refused to directly supply weapons to Ukraine out of concern for damaging its relations with Moscow. Israel fears that if it arms Ukraine, Moscow could retaliate in Syria, where Israel has conducted airstrikes at Iranian and Hezbollah forces and where Russia has troops. 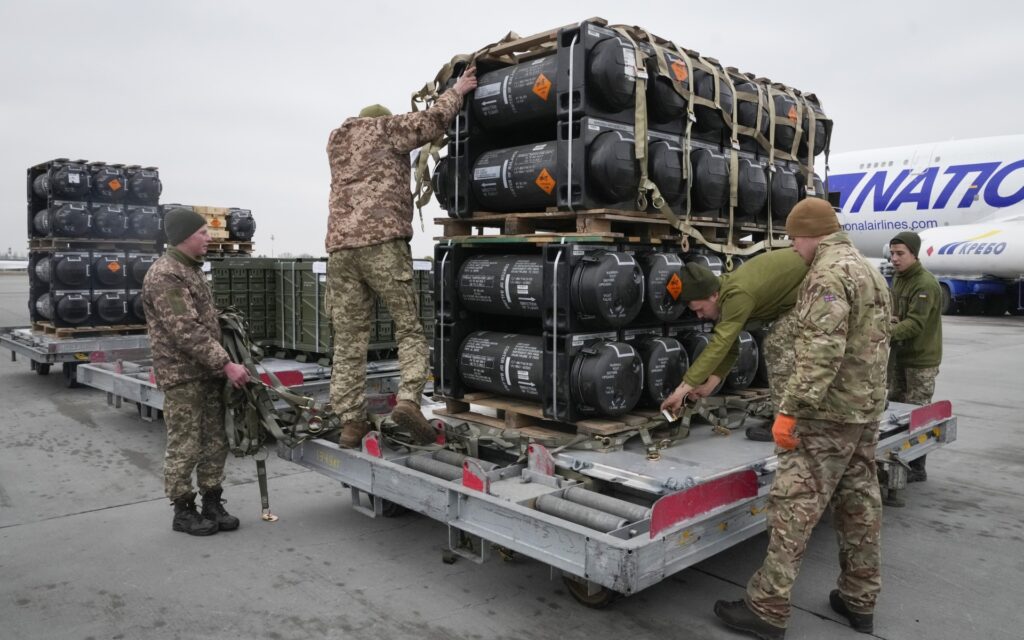 Israel also at first did not want to appear complicit in arming Ukraine if the Pentagon drew weapons from the stockpile. Half of the 300,000 artillery rounds destined for Ukraine has already been shipped to Europe and will be delivered through Poland, according to the Times.

A senior U.S. official told the paper that the U.S. has so far sent or pledged to sent Ukraine just over one million 155-millimeter shells and a “sizable portion” of that has come from the stockpiles in Israel and South Korea.

Ukraine is currently using 90,000 artillery rounds a month, twice the rate at which they are being manufactured by the U.S. and Europe combined, officials told the Times.

Biden announced in an op-ed Tuesday evening that he has decided to send advanced rocket systems to Ukraine, marking an increased capacity for Ukrainian forces to hit Russian targets as well as deeper U.S. support in the war. https://t.co/R7Rwk5Ua1s

According to the Pentagon, the U.S. has committed more than $27.4 billion in security assistance to Ukraine since the beginning of the Biden Administration, including more than $26.7 billion since Russia invaded Ukraine in February 2022.

A day after Singh admitted the Pentagon was pulling from its stockpiles in Israel and South Korea, Defense Secretary Lloyd Austin vowed to continue supplying Ukraine “for as long as it takes.”

The Center for Naval Analysis’s Michael Kofman told the Times, “The U.S. is making up the difference from its stockpiles, but that’s doubtfully a sustainable solution. … It means the U.S. is taking on risk elsewhere.”