In an interview with Breitbart News Senior Editors-at-Large Rebecca Mansour and Joel Pollak, Schweizer highlighted the financial relationship between Hunter Biden and the Chinese state — including a $1.5 billion deal establishing a private equity firm — as an illustration of what he dubbed “the new corruption.” He further explained how foreign governments purchase political influence through “sweetheart deals” with the children of politicians.

Mansour asked Schweizer to explain the term “princelings” and its application to the children of high-level politicians. “All of [your] books basically show that corruption is like a game of Whack-a-Mole. You knock it down in one area, and then these corrupt politicians find another avenue for graft, and I’m looking at Secret Empires, and there’s another avenue for graft. I want you to explain to us this concept of ‘the princelings.’ This is something you describe in this book. Tell us what that is.” 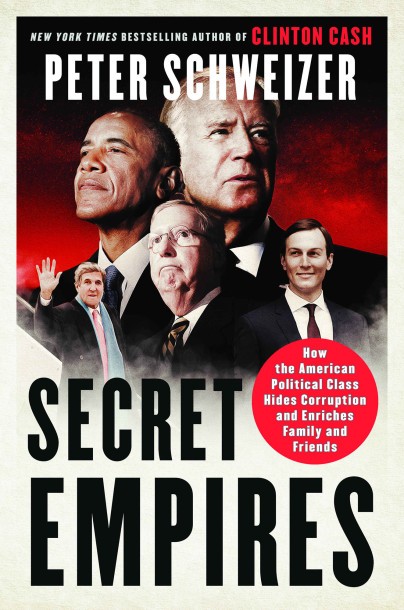 Schweizer explained how political favoritism is procured by foreign governments via business dealings with the children of high-level U.S. politicians.

“Well, Rebecca, you’re exactly right about corruption,” replied Schweizer. “When you have the motive of greed and when you don’t worry too much about ethics, it’s very easy to come up with creative ways to enrich yourself, and one of those is what we call ‘American princelings.’ The term ‘princelings’ is really a term that’s been widely used in China and in the West to talk about China, where in communist China, if you want to get deals done, if you want to get favors from the government, you basically do business with their children, and these children of communist party officials are called the princelings.”

Schweizer continued, “One of the things I argue in the book is that we are, in a sense, importing that model into the United States, and you see that a lot as it relates to the Chinese government. The Chinese government has figured out that the way to get favorable treatment from policymakers in Washington, DC, is by, basically, signing sweetheart deals with the children of politicians because they think by doing so, they’ll get better policy positions from our government, and the history indicates in the Obama administration that that’s exactly what happens.”

As an example of American princelings, Schweizer pointed to the Chinese government’s provision of $1.5 billion in funding for Bohai Harvest RST (BHR), a private equity firm upon whose board Joe Biden’s son, Hunter Biden, sits.

“In December of 2013, Vice President Joe Biden flies to Asia for a trip, and the centerpiece for that trip is a visit to Beijing, China,” said Schweizer. “To put this into context, in 2013, the Chinese have just exerted air rights over the South Pacific, the South China Sea. They basically have said, ‘If you want to fly in this area, you have to get Chinese approval. We are claiming sovereignty over this territory.’ Highly controversial in Japan, in the Philippines, and in other countries. Joe Biden is supposed to be going there to confront the Chinese. Well, he gets widely criticized on that trip for going soft on China. So basically, no challenging them, and Japan and other countries are quite upset about this.”

Elaborating, Schweizer said, “Well, I think the reason he goes soft on China is because with him on that trip, flying on Air Force Two, is his son Hunter Biden, and ten days after they return from China, Hunter Biden — who has this small firm, he has no background in private equity, he has no background in Chinese finance — gets a whopping $1.5 billion deal from the Chinese government. This is the Chinese government giving Joe Biden and a [John] Kerry confidante the management over this money, and they made huge fees off of this money, and it’s an example of this kind of corruption. That’s the first of three major deals that the Chinese government does with people who are either the children — that is the sons — or close aides to Vice President Biden or Secretary of State John Kerry.”

“So [Hunter Biden and Devon Archer] get this $1.5 billion to invest, and what they are supposed to do is basically invest in companies that benefit the Chinese government,” stated Schweizer. “So just think about this for a second. This is the vice president of the United States whose father is supposed to be commanding American presence and power in the Pacific to deal with the rising challenge from China, and his son is investing $1.5 billion of Chinese government money. So what do they do? They invest in an American high-precision tools company called Henniges, which used to be owned by Rocket Company, but they produce anti-vibration technologies which have a dual-use application, so this transaction actually requires the approval of the federal government, as it has national security implications. So again, the vice president’s son is helping the Chinese government take over a dual-use military technology-related company called Henniges.”

“But it gets even worse because another investment that they make is in something called CGN — China General Nuclear — which is an atomic power company,” recalled Schweizer. “They invest in this company in 2014. A year later, what happens? The FBI arrests and charges senior officials in this company with stealing nuclear secrets in the United States. Specifically, they’re trying to get access to something called the AP-1000 nuclear reactor that is very similar to the ones that we put on U.S. submarines. So again, you have the son of the vice president, a close aide to the secretary of state who are investing in a company that is trying to steal nuclear secrets in the United States. It’s a stunning story, and here’s the thing: none of this is required to be disclosed because they’ve figured out a way to get around these disclosure laws.”

Schweizer noted the lack of public disclosure regulations regarding the financial relationships of politicians’ family members with foreign governments.

Schweizer emphasized Hunter Biden’s lack of a background in the private equity business, casting his status as the son of a vice president as a golden ticket for Chinese state funds.

“Here’s the thing people have to keep in mind: Hunter Biden got $1.5 billion from the Chinese government,” Schweizer said. “He has no background in private equity. He was a lobbyist before his father became vice president for the casino industry. He has no background. He has no business getting a deal like this. He got this deal, pure and simple, because he is the son of a vice president, and the Chinese said, ‘We give him this deal, and his pal, who’s a former aide to John Kerry, they’re going to run it, and by doing so, we are going to curry favor with these guys,’ and you know what? Based on the track record, based on the response of the Obama administration of Secretary of State John Kerry and of Vice President Biden, that’s exactly what they got. They got good action for their money.”