Victor Davis Hanson, historian, professor, and author of The Dying Citizen: How Progressive Elites, Tribalism, and Globalization Are Destroying the Idea of America, said on Wednesday that “open borders,” “globalism,” and “tribalism” are contributing to a collapse of the United States reminiscent of the fall of Rome.

Borders, language, and culture are essential for national continuity, Hanson stated in an interview on SiriusXM’s Breitbart News Daily with host Alex Marlow.

He remarked, “Every nation that has survived has had borders that were defensible and clear, and the idea was that they have their own space to inculcate their language or traditions or customs, then enhance their constitution. Without that, it’s just short of a migratory, 5th century A.D. Rome where people come across the Danube River and destroy the nation-state.”

Growth of “identity politics” predicated on ethnicity and race, Hanson warned, would contribute to American collapse if unchecked.

He stated, “Identity politics is another natural human pathology where we identify by our superficial appearance, and when we start to do that we regress to something like the former Yugoslavia or Rwanda. And that trajectory will be in our future unless we stop it and realize that we’re a very rare multiracial democracy that’s given up — each of us — our primary identities as race or [ethnicity] and have absorbed, instead, the idea of Americanism.”

“You can’t have a country unless there are individual people who are legally here and legally have traditional and customary rights,” he stated.

“[Citizenship] is under attack,” he determined. “Natural, organic forces suggest that the middle class is no longer central to the American experience, and we can see that whether it be declining wages, or increasing student debt up to $1.7 trillion in aggregate, or people marrying later or having children later, buying homes later. [It is] the strangulation of the middle class, which was always essential to citizenship.”

The undermining of citizenship is advanced by “the blurring between a resident a citizen,” Hanson added, “The idea that we have 50 million people here in the United States who were not born in the United States makes it an enormous challenge to assimilate and integrate them. … Just at the time when we needed to emphasize the responsibilities and rights of citizens, we blurred the two.” 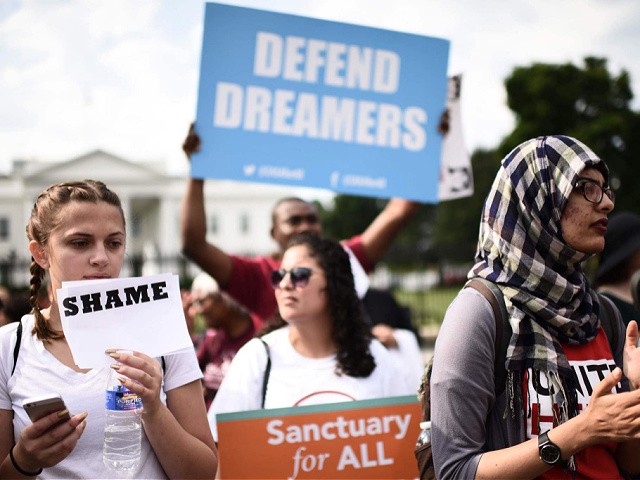 Immigrants and supporters demonstrate during a rally in support of the Deferred Action for Childhood Arrivals (DACA) in front of the White House on September 5, 2017, in Washington DC. (ERIC BARADAT/AFP via Getty Images)

Hanson credited former President Barack Obama with advancing ethnic and racial agitation by socially commodifying artificial grievances. The 44th president regularly advanced neo-Marxist narratives in which the ideology’s paradigm of class struggle was reframed as a hierarchy of oppression based on continually changing left-wing parameters related to ethnicity, race, and sexual preference.

“I think Obama started a lot of it when he recreated this idea of diversity, meaning that we didn’t consider class anymore,” Hanson said. “Suddenly class didn’t matter. You could be a multi-millionaire Punjabi immigrant; you could own seven ophthalmology clinics and be from South Korea; you could be Oprah; you could be Meghan Markle, but you were now a victim because you were so-called non-white and you represent 30 percent of the population.”

He continued, “That polarization, I think, enticed people and encouraged them to keep going.”

Hanson warned of the growing pursuit of manufactured victimhood among Americans to secure various advantages over others in lieu of meritorious distinctions.

“Tribalism — we could use that word — is now endemic, and everybody is trying to find a tribal affiliation,” he concluded. “It’s a search to find a cache, because if you are oppressed or a victim — victimized — then you feel that you have certain rights to compensation, or reparatory action from the government, or favoritism in hiring.”