Those plastic shields propped up in restaurants, classrooms, and office buildings around the country may be ineffective against the coronavirus and might even possibly be making the spread worse, according to a report from the New York Times.

Though scientists and researchers could not conclusively state whether or not plastic barriers had any impact on the coronavirus, the evidence currently shows that plastic barriers were shown to be disrupters of airflow and ventilation to the point that the virus becomes more transmissible.  The barriers were also shown to give people a false sense of security.

In normal circumstances, air typically replenishes within a room every 15 to 30 minutes, but with plastic barriers, research showed a rupture in the airflow that would “create ‘dead zones’ where viral aerosol particles can build up and become highly concentrated.” From the Times:

There are some situations in which the clear shields might be protective, but it depends on a number of variables. The barriers can stop big droplets ejected during coughs and sneezes from splattering on others, which is why buffets and salad bars often are equipped with transparent sneeze guards above the food.

But COVID spreads largely through unseen aerosol particles. While there is not much real-world research on the impact of transparent barriers and the risk of disease, scientists in the United States and Britain have begun to study the issue, and the findings are not reassuring.

“If you have a forest of barriers in a classroom, it’s going to interfere with proper ventilation of that room,” said professor Marr. “Everybody’s aerosols are going to be trapped and stuck there and building up, and they will end up spreading beyond your own desk.” 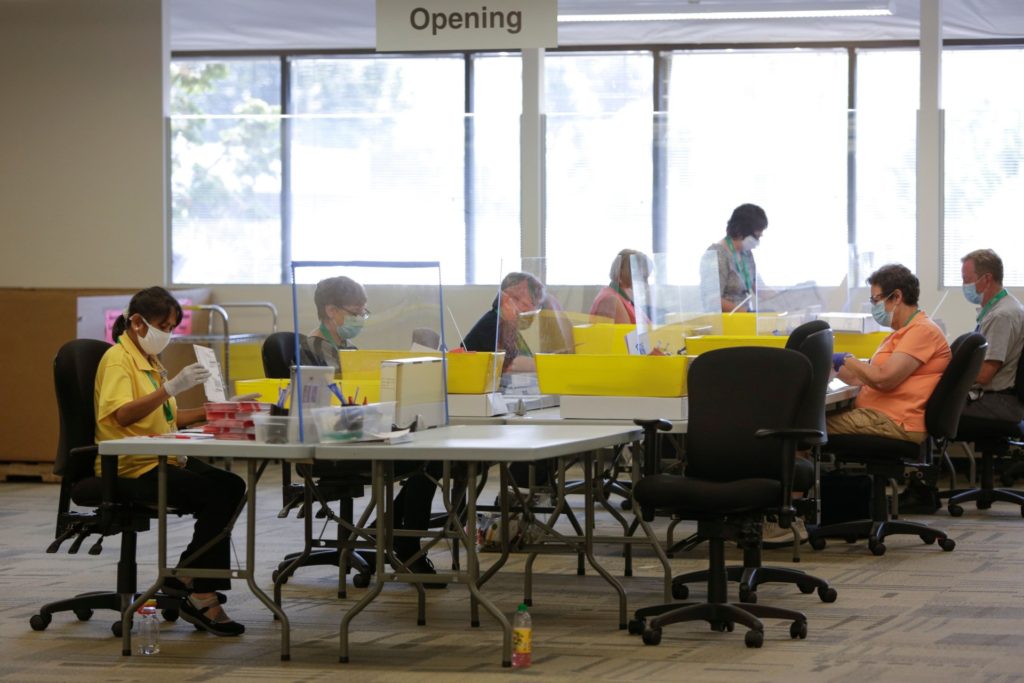 Election workers are spaced out and separated by screens for protection from the coronavirus as they open envelopes containing ballots for the August 4 Washington state primary at King County Elections in Renton, Washington on August 3, 2020. (JASON REDMOND/AFP via Getty Images)

“One way to think about plastic barriers is that they are good for blocking things like spitballs but ineffective for things like cigarette smoke,” Marr later added. “The smoke simply drifts around them, so they will give the person on the other side a little more time before being exposed to the smoke. Meanwhile, people on the same side with the smoker will be exposed to more smoke since the barriers trap it on that side until it has a chance to mix throughout the space.”

Researchers from Johns Hopkins University published a study in June alleging that plastic barriers in classrooms further increased coronavirus infections. Prior to the pandemic, a study published in 2014 also alleged that office cubicle dividers “may have contributed to disease transmission during a tuberculosis outbreak in Australia.”

“In a Massachusetts school district, researchers found that Plexiglas dividers with side walls in the main office were impeding airflow,” added the Times. “A study looking at schools in Georgia found that desk barriers had little impact on the spread of the coronavirus compared with ventilation improvements and masking.”

Richard Corsi, incoming dean of engineering at the University of California, Davis, agreed plastic barriers in classrooms will not protect students.

“If there are aerosol particles in the classroom air, those shields around students won’t protect them,” said Corsi. “Depending on the airflow conditions in the room, you can get a downdraft into those little spaces that you’re now confined in and cause particles to concentrate in your space.”

In Britain, researchers found that plastic barriers offer the most protection for store clerks when a potentially infected customer coughs, causing the particles to directly hit the plastic due to the fast moment. However, if the same customer were to stand and talk for a few minutes, the particles would linger in the air. Catherine Noakes, professor of environmental engineering for buildings at the University of Leeds in England, conducted a study in 2013 that showed barriers between beds in hospitals would actually help germs and particles spread.

“We have shown this effect of blocking larger particles, but also that the smaller aerosols travel over the screen and become mixed in the room air within about five minutes,” said Catherine Noakes, professor of environmental engineering for buildings at the University of Leeds in England. “This means if people are interacting for more than a few minutes, they would likely be exposed to the virus regardless of the screen.”

Noakes added that most screens erected in public places are “poorly positioned and are unlikely to be of much benefit.”

“I think this may be a particular problem in places like classrooms where people are present for longer periods of time,” Noakes said. “Large numbers of individual screens impede the airflow and create pockets of higher and lower risk that are hard to identify.” 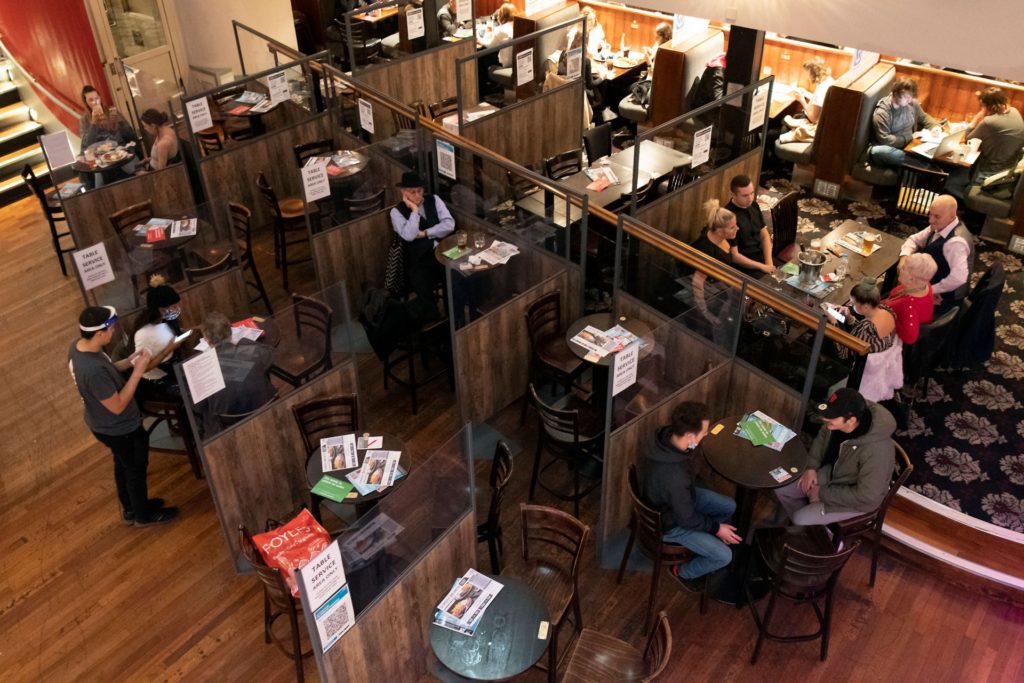 A member of bar staff wearing PPE (personal protective equipment), of a face shield or visor as a precautionary measure against spreading COVID-19, takes an order from customers at a table which is separated by Perspex screens as part of social distancing measures at a pub in the Soho district of London. (JUSTIN TALLIS/AFP via Getty Images)

For a plastic barrier to offer maximum protection, it would have to be sealed on all sides with only minimal airflow between the opposing sections, as in the case of a bus driver or a bank teller, according to the report.

The Times emphasized that while the jury is still out on the role of plastic barriers when combatting coronavirus, “all the aerosol experts interviewed agreed that desk shields were unlikely to help and were likely to interfere with the normal ventilation of the room.” Going forward, experts advised that schools, offices, and places of business “focus on encouraging workers and eligible students to be vaccinated, improving ventilation, adding HEPA air-filtering machines when needed and imposing mask requirements.” Professional engineers should also be consulted when erecting plastic barriers to better improve a room’s airflow.

Going back to 2020, experts have emphasized that plastic shields do not provide much protection to the coronavirus without a mask.

These barriers are designed to prevent large spray-born droplets, which are released when someone talks loudly or coughs at close range,” Shelly Miller, a University of Colorado Boulder professor of environmental engineering, told Vox in October 2020. “But you also have to account for the smaller particles that can go around the plexiglass barrier and stay airborne for longer periods of time, which someone can still inhale.”

“I would never wear a face shield without a mask. It won’t protect you in any way from inhaling an airborne virus,” Miller added. “I would recommend wearing eye protection if you’re sharing air with an infectious person, since we have receptors that can pick up Covid in our eyes, mouth, and nose.”

Currently, the Centers for Disease Control and Prevention (CDC) recommends that workplaces “use physical barriers, such as strip curtains, plexiglass or similar materials, or other impermeable dividers or partitions to separate manufacturing workers from each other, if feasible.” The agency also advises facilities to “consider consulting with a heating, ventilation, and air conditioning engineer to ensure adequate ventilation in work areas to help minimize workers’ potential exposures.”