Establishment conservatives have spent most of this year complaining about how they’re being treated by the alt-right on Twitter.

The alt-right are monsters, they say, sending them offensive memes and even ordering prank pizza deliveries to their houses. The horror!

Well, if they think that’s bad, they clearly haven’t encountered Arab Twitter. Over the past day, my Twitter feed and that of my SWAG by Milo store manager have been deluged by thousands of messages — some in Arabic, some in broken English — containing rabid homophobia and chilling death threats.

And unlike the full-time provocateurs and pranksters of the alt-right, much of it is deadly serious.

I’m not complaining, you understand — Arabic Twitter can bleat all they like. Even if they’re silly enough to carry out one of their threats, my well-paid security team of handsome 6’4″ black men will certainly be able to handle them.

I may be on the vanguard of the “armed gay” movement, but I’m a big enough deal to have good quality protection.

On the other hand, I have had to shut down my previously-open DMs on Twitter, which means fewer declarations undying of love from otherwise-straight conservative men. So I’m understandably a little annoyed.

Of course, it was only a matter of time before I got the Muslims’ attention. As a Catholic homosexual of Jewish descent who regularly speaks out against Islam, the only way I could offend these guys any more is if I was sponsored by the National Pork Board.

It started when I posted a poll on Twitter for my followers, asking them if they’d rather their child had Islam, or cancer. A reasonable question, I thought. But it drew the attention of a Saudi Twitter account with 1.2 million followers.

At first there was just trolling. It would be hypocritical for me to complain about that, of course.

But the situation quickly began to deteriorate, as myself and the account of my official store – SWAG By Milo, the best merchandise on the internet! – quickly became the subject of a deluge of death and bomb threats. When I woke up this morning, there were thousands. Here’s a small selection. 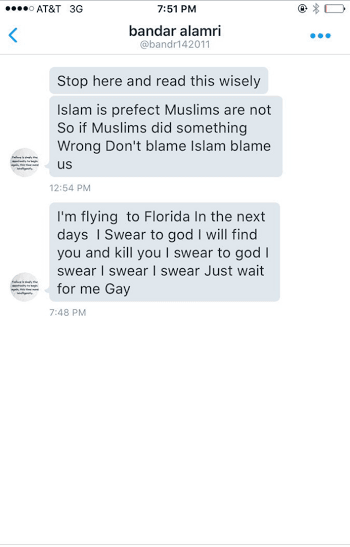 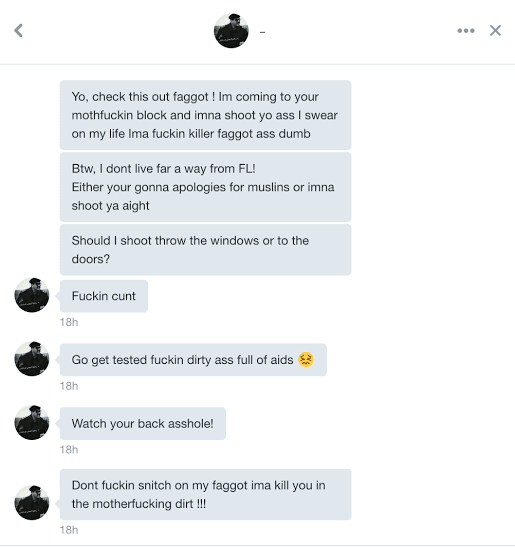 Now, when the alt-right call me a faggot or tell me to kill myself, which is surprisingly often given that I’m allegedly their biggest cheerleader, I don’t take it seriously. (For the last time guys, I won’t drink bleach, I only use it on my hair occasionally.)

The alt-right have never killed anyone. But a Muslim just killed or maimed over 100 attendees of a gay nightclub in Florida.

So how do I know these Arabs are serious? When these guys get angry enough to climb off their goats — or little boys — they really know how to do a proper threat.

The Muslim terrorist’s zeal for social media makes me suspect they think there’s an extra 15 virgins in it for them if they wage Jihad virally.

I know they’re Muslims, by the way. The women wear face curtains in their Twitter profile pictures, and most of the writing was in those weird ink dribbles the Koran is written in that progressives insist on gushing over, saying it’s the most beautiful thing they’ve ever seen.

I’ve also never seen so many unibrows — on the men and the women.

Now, normally when I’m mobbed by Muslims, I just get in an Uber and leave east London. But unlike social justice warriors and Brits, these people can operate firearms. I’m not sure they can operate deodorant, but fortunately the internet shields me from finding that out.

Even though I’ve written so often about progressive hate-crime hoaxes, I doubt anyone will have the audacity to claim these are faked. There are thousands of them. But just in case, the main difference between these and, say, fake rape threats sent to a feminist, is that they don’t read like 50 Shades Of Grey.

And, of course, they come from murderous scumbags who know a thing or two about killing, not internet pranksters (including a healthy amount of women). Eh, who knows.

Either way, I won’t be begging for crowdfunding, crying crocodile tears to the UN, or basing my career on victim status. I also won’t be claiming to have PTSD from Internet meanies. Everybody knows I get that from my weekend dates.

Incidentally, a few of these Saudi-based geniuses appear to have somewhat missed the point of trolling a gay guy. At least three of my DMs yesterday contained threats to anally violate me, which isn’t so much a threat as a reward. But no one claimed these savages were at the top of the Bell Curve.

From establishment conservatives whining about the alt-right to feminists boo-hooing about trolls from 4chan, the past few years have seen intense and often comical outcries about allegedly “threatening” behaviour online that usually turns out to be just teenage trolls looking to kick up a fuss.

Maybe it’ll take Arabic Twitter to remind us what genuinely threatening behaviour looks like. I’m beefing up my security detail…