Having amassed over three hundred thousand followers on Twitter (more than three-fifths of which were acquired in the last six months), I felt it was time to remind you all that I’m, like, really famous and successful and totally the hottest thing in American media right now!

Last week, 50,000 new followers arrived in just two days, courtesy of Twitter — who just can’t figure out that trying to silence me only makes my appeal stronger. But attempts to censor me are only part of the story. There are more reasons why I’m on a meteoric rise, and my detractors are disappearing into nothingness.

There is a point to this article besides my ego. Honestly! Not that you wouldn’t want to read an article that’s just about how great and successful I am. Of course you would. But there’s more to it than that.

You see, when my public profile first started to take off during the GamerGate controversy, a pretty large and determined contingent of feminists and progressives came for me.

They wrote hit-pieces, tried to get me banned from Twitter, disrupted my events with bomb threats, and tried to get me thrown out of universities. In short, they tried to silo the Milo. 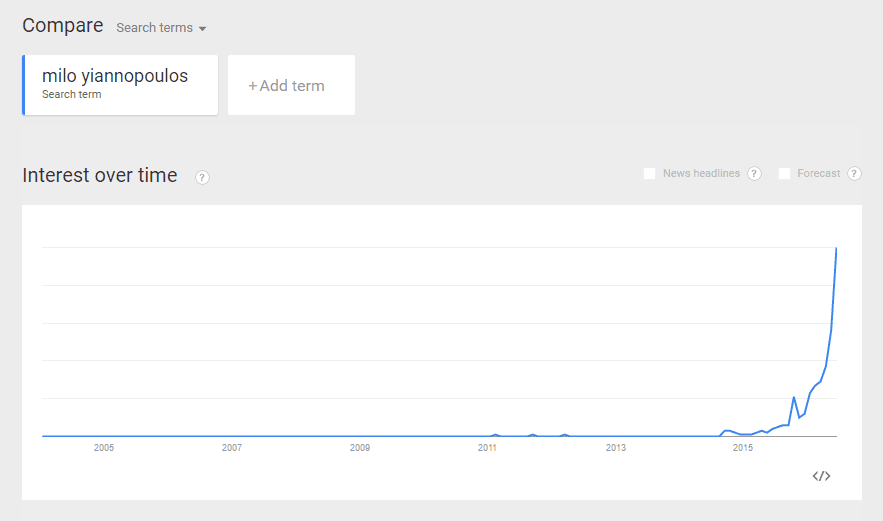 My YouTube channel has over 200,000 subscribers now. On Facebook, I have 165,000 followers. Last month, my tweets generated a staggering 143 million impressions. Did you know major magazines don’t do those kinds of numbers? Almost nobody does.

Writers from other outlets, considered to be large and influential, invited everywhere I’m not allowed, are half as big as I am.

That’s got to terrify not just the Left but the 60-year-old establishment conservative losers still praying that Ted Cruz will by some miracle get the nomination. As staff are laid off from progressive and cuckservative publications, we’re expanding. That’s why I like to remind them about it every six months or so.

They are yesterday. I am tomorrow.

I’m even overtaking people I used to look up to. (Well, you know what I mean.) 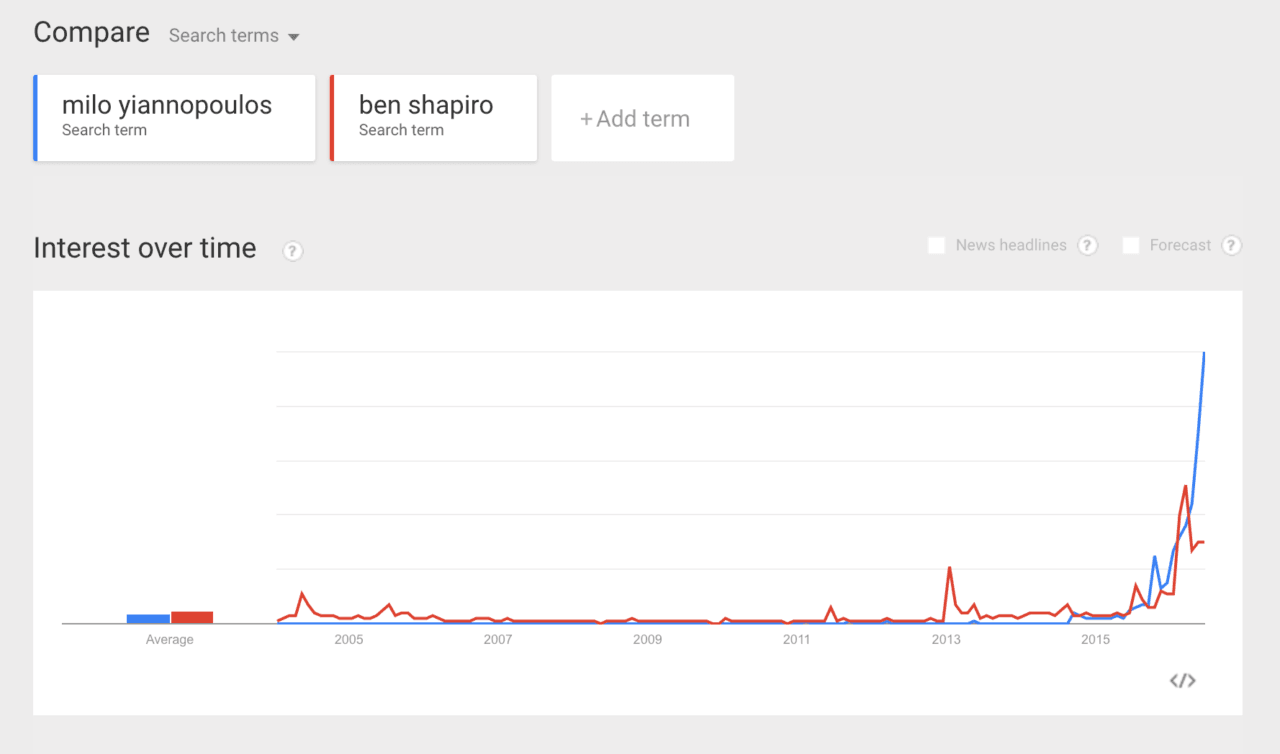 While my merchandise is in such high demand my warehouse is getting bomb threats, little Ben has been reduced to hawking mugs on Instagram to his rapidly dwindling globalist audience. Sad!

Compare the numbers in my last update to the new ones. Scary, right? That’s why my opponents are so insecure. They’ll snipe at me on Twitter, only to block me once I draw attention to their own pitiful numbers and pathetic arguments.

My progressive, hipster rivals at BuzzFeed, Gawker and so on are in decline, drowning in student loan debts and languishing in revolting basement apartments. (I’m looking at you, Jesse Singal!) Meanwhile, I’m jetting around the world, speaking to packed audiences with 1,000 people waiting outside who couldn’t get in and live streams with tens of thousands of viewers.

My recent press conference in Orlando reached millions of viewers without a shred of broadcast coverage.

As for the cuckservatives, they’re losing readers almost as fast as they’re losing their hair. Glenn Beck recently had to lay off 40 of his employees. Unlike my rivals, I’m like a fine wine — I become better by the day, am more sought after by connoisseurs and more expensive to have at your table. Or under it, whatever.

A good supervillain always reveals his master plan in a dramatic monologue when he’s certain the heroes cannot beat him, so here goes. Six months ago, I declared war on social justice, revealing exactly how I was going to fight them — and how I was going to win. Indeed, I’m so confident in my abilities, I even told my opponents exactly how to beat me.

No doubt many of them thought I was bluffing. But six months later, here we are. I’m still winning, and they’re still losing. By forcing my rivals to look at the hard facts of their failure, I expect their morale to plummet as rapidly as their follower counts. But even if it doesn’t, it’s clear now that there’s nothing they can do to stop me. The bells are tolling for the regressive left and those on the right who pander to them.

Drawing attention to my success serves another purpose: I want to inspire the next generation. I want to show young conservatives that they don’t need National Review  to become successful.

You don’t need the establishment any more. You can reach millions of people on your own, without anyone’s permission.

You see, what frightens the establishment even more than me is all the people who might follow my example. That, more than anything, represents the greatest threat to their power. They fear not just the next wave of journalists and thinkers but even meme magicians who ruthlessly skewer them on Twitter, drawing attention to their hypocrisy and irrelevance, like my partner in crime and rising Twitter star @PizzaPartyBen.

Sure, the old guard will try to lean on the new media barons in Silicon Valley, hoping to cut off the oxygen of publicity and prop themselves up.

But as we saw with Facebook’s Trending News scandal, social media companies are scared of looking biased. Once you’re big enough, with presences on multiple platforms, they won’t be able to touch you for fear of the fallout.

They tried to take me out once, remember, taking my “verified” checkmark away on Twitter and even suspending my account on more than one occasion. They tried to strike me down, but, as I predicted, I became more fabulous than they could possibly imagine.

Twitter never returned my checkmark to me, of course, but I can’t say I miss it. Being the official enemy of the Twitter-State, a sort of new East Berlin, suits me just fine. And now I spend all day every day sticking two fingers up to the new, sharia-compliant Twitter — on their own platform!

I’ve now got a podcast, a speaking tour, I make the national news regularly (sometimes daily) and I’ve become the general at the head of a platoon of young, bright, savvy memesters who increasingly influence both the national conversation and the direction of politics in this country.

Every day I’m turning down book, TV and job offers. One conservative media outlet just launched a Daily Milo feature. That’s how hungry readers are for the Dangerous Faggot.

All this, and I’ve remained one of the most down-to-earth and humble new media figures in America. It’s astonishing.

I hope my opponents really think about that, by the way. Yes, you, the feminists and regressive leftists. Listen up for a moment. There was a time you could have censored me, shut me down, got me fired or stopped my speech.

That time has passed.

You tried to drive me off the internet, so I became the internet. I’m a fully-distributed, meme-powered truth machine on multiple platforms with a vast network of beautiful and talented shitlording buddies, with so many presences in so many places that attempting to silence me is now utterly futile.

(In just a couple of months, 40,000 people have opted to receive a daily picture of my face on Instagram.)

The attempted censorship was the well of power from which I gained my strength, and you cannot help but keep refilling it. Every time you do, my beloved friends and fellow freedom warriors leave egg on your faces all over again.

Social justice warriors can pull twentieth-century tricks like screaming and blowing whistles into my microphone, but this is the twenty-first century. I call it the Age of Milo. You’re just shooting yourself in the foot. (Trigger Warning: self harm!)

The whole world is seeing how infantile your whole side of the argument is on YouTube, social media, and in your own college newspapers. The revolution has arrived. Your attempts at censorship and disruption gave me more power, wealth and joy than you loveless, dour, overweight, blue-haired, facially pierced, grievance-obsessed losers will have in a lifetime.

I have become an avatar of the Streisand Effect: a chan-fuelled homosexual behemoth whose ears hear more than some nations’ intelligence agencies, and whose followers are larger than some armies.

Of course, the haters and losers come for me from time to time. But it helps to be anti-fragile and, more importantly, totally without shame. You see, the Left has nothing on me, and what they do have no one cares about.

Instead, they have to bring arguments. They haven’t done a great job of that so far.

I have more henchmen than lovers — admittedly, that did take a while — and more influence than the lot of you combined. I can be anywhere, any time. Just when you think you’re safe, I’ll appear on your campus in a Native American headdress or a sombrero.

So: to the anti-GamerGaters, the social justice warriors, celebrity Twitter, feminists, vapers, cyclists, protesters, fake lesbians (all of them) and Black Lives Matter, this mimosa is dedicated to you. I’m actually drinking champagne right now, and you’re not, because you’re sad and poor.

Alright, darlings. I’ll be back in another six months with an update!