The Boiler, a Pierogi Art Gallery-owned venue in Williamsburg, Brooklyn has cancelled Lucian Wintrich’s upcoming pro-Trump art exhibition, after threatening to redirect fees to Hillary Clinton’s campaign. The exhibition organizers, who are still fundraising for the project, say they have an alternative venue which will be announced soon.

In an email to arts website Artnet, Pierogi Gallery co-owner Joe Amrhein claimed that he had been led to believe that the event, which is set to feature performance art pieces from Breitbart’s MILO, Gavin McInnes, and Martin Shkreli, was satirical. He then threatened to send any money he received from Wintrich to the Clinton campaign.

Lucian Wintrich, the exhibition organizer, is a Trump supporter and creator  of “Twinks For Trump,” a photoseries showcasing young gay male Trump supporters. His work was featured at the “Gays For Trump” party at this year’s RNC. Wintrich’s support for Trump cost him his job after he was praised in a column by Milo Yiannopoulos.

“This is not something that we would have shown as part of the gallery program and did not intend to support it” said Amrhein.

“Any money that would be made by Pierogi through this exhibition will be given to the Hillary Clinton campaign, a hopefully fitting irony for this narcissist asshole.”

Amrhein later sent a follow-up comment stating that the event was cancelled, and publicly accusing Wintrich of “lying to him” about the nature of the event.

In text messages between Wintrich and Pierogi seen by Breitbart, Amrhein can be seen fretting that a pro-Trump event would cause “20 years of reputation” to “go down the drain” even as he attempted to placate Wintrich by trying to find him a different venue.

Amrhein claims to have been tricked into believing that the event was satirical, yet earlier text messages between himself and Wintrich show that he was fully aware this was a Trump-related, and anticipated the potential PR fallout.

“We’ll go ahead with your show but we we need to take The Boiler off the press release and advertising” wrote Amrhein in a text message dated September 28th. “We also won’t allow to have Trump’s name appear outside the gallery on the sidewalk or street.”

However, as negative press piled up (Mic.com recently scared a gay military charity into declining funds that Wintrich planned to raise at the event), Amrhein grew more hysterical.

“You lied to us. There are Alt-Right figures in the show. You lied to us!!! I don’t care about the press. I guess I do care you are destroying us at our expense” wrote Amrhein in a text to Wintrich this Wednesday. He then informed Wintrich that he wanted to cancel the event.

The cancellation comes amid news that left-wing gay activists are planning to protest the event. Gayletter, a New York-based gay magazine, emailed a message calling for protests earlier today, and a Facebook event entitled “Queer Love Against Trump’s Hate” calling for protests against “bigotry and fascism” at the event has also been set up. 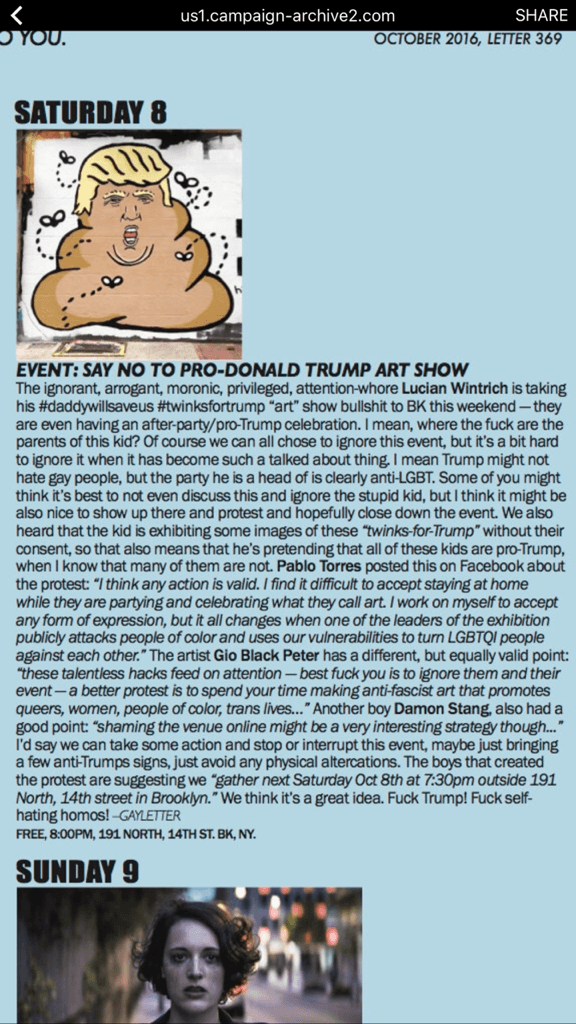 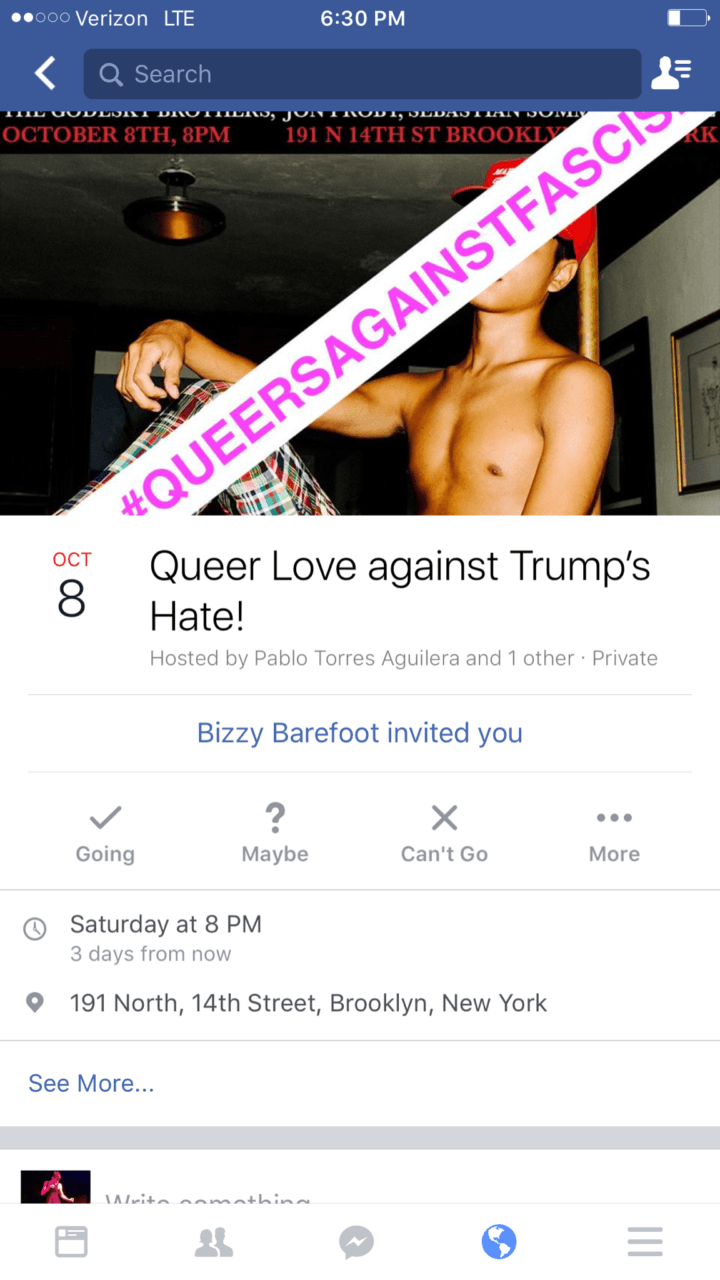 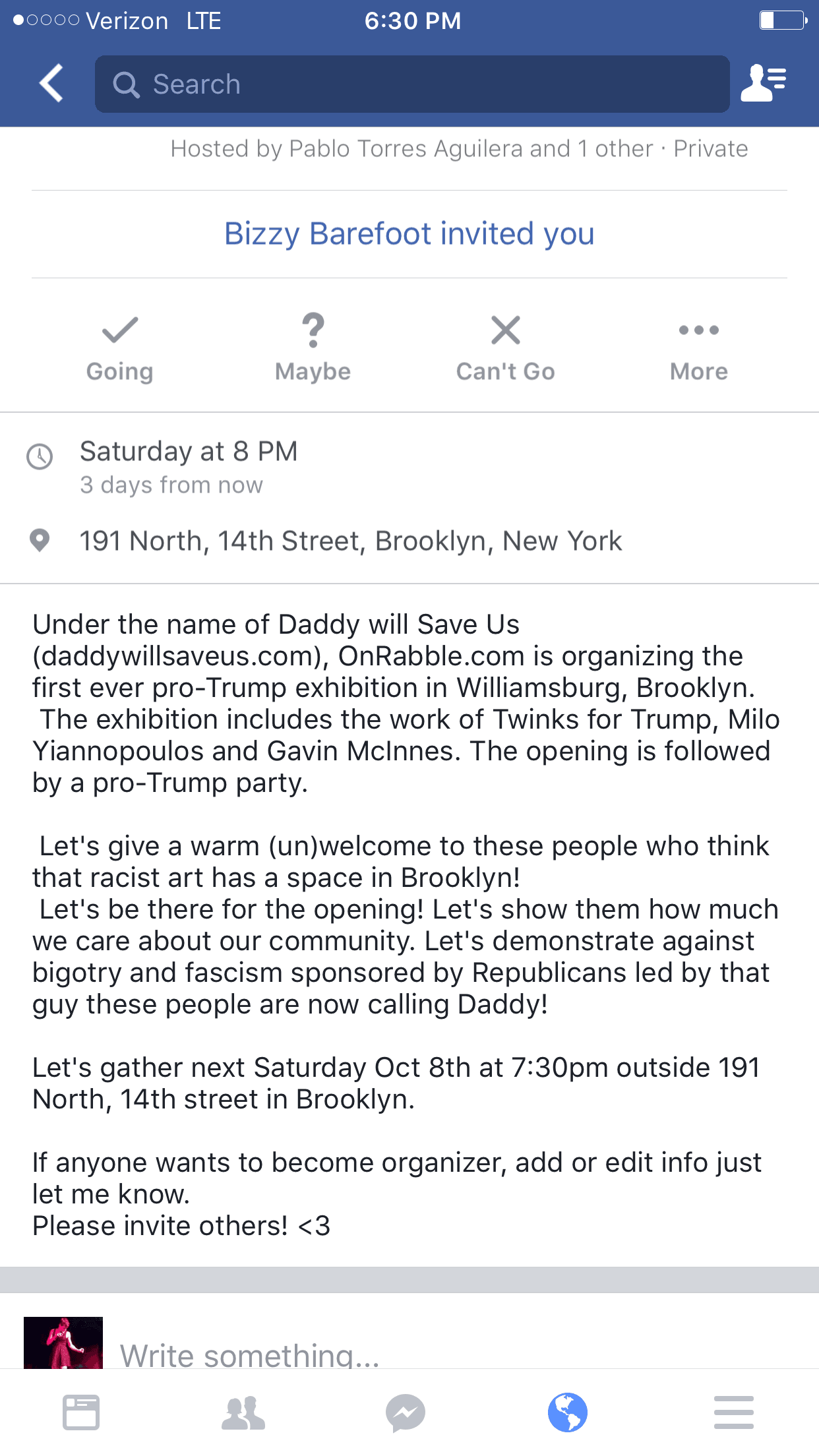 This is not the first art event to cause political controversy. Other famous examples include Piss Christ, a plastic crucifix submerged in the urine of artist Andres Serrano, which debuted in the late 1980s. That too generated protests, but left-wing supporters of the art piece defended it as an example of freedom of speech.