Keith Olbermann, host of ESPN’s Olbermann, has been suspended by the Worldwide Leader in Sports for a week for his recent tweets about Penn State fans and students. The suspension stems from a message in 140 characters or less about the school’s annual pediatric cancer fundraiser and Olbermann’s denigration of PSU students as “pitiful.” 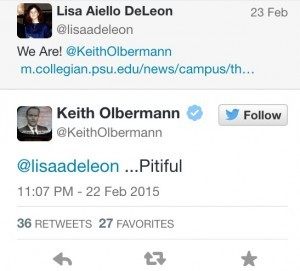 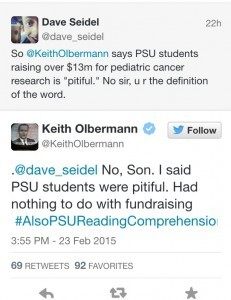 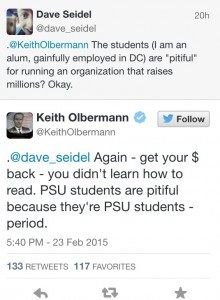 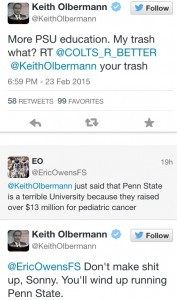 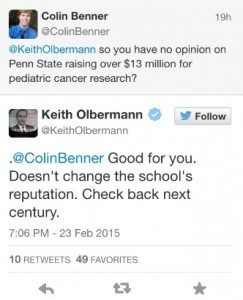 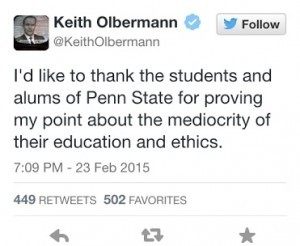 “We are aware of the exchange Keith Olbermann had on Twitter last night regarding Penn State. It was completely inappropriate and does not reflect the views of ESPN. We have discussed it with Keith, who recognizes he was wrong. ESPN and Keith have agreed that he will not host his show for the remainder of this week and will return on Monday. The annual tradition of THON and the efforts of the students of Penn State to fight pediatric cancer should be applauded.”

Olbermann himself later apologized on Twitter for his tweets.

I apologize for the PSU tweets. I was stupid and childish and way less mature than the students there who did such a great fundraising job.

This is not Olbermann’s first time finding himself in the crosshairs of his employers. He left ESPN in 1997 and, according to a network executive, he “napalmed” his bridges with them. Current TV fired and later sued him. MSNBC suspended the bespectacled host and later fired him after a spat.