SPRINGFIELD, NJ — The raucous, sunbaked crowd at Baltusrol saw Robert Streb put on a show with a major championship record 63 vaulting him into a tie for the lead heading into the weekend at the PGA Championship.

The journeyman Streb drained a 20-foot birdie putt on his last hole to tie the record. Jimmy Walker fired a 66 to stay on top of the leaderboard in a tie with Streb. The five-time winner on the PGA tour, Walker has yet to contend in a major championship so it will be interesting to see how he holds up under the intense pressure on the weekend of a major. After 35 holes of stellar golf, Walker enjoyed a chance for the lead alone on the easily reachable par-5 18th. He made a mess of the hole and ended with a disappointing bogey to cap off an otherwise stellar day. Walker and Streb tied the 36-hole record for the PGA Championship at 131.

Defending champion Jason Day double-bogeyed the 7th hole, got angry, and then went on a tear with seven birdies in his next eight holes. He ended up shooting a 65 putting him in a tie for third with Argentinian Emiliano Grillo. Jordan Spieth is in position to make a run on the weekend after shooting a 3 under 67, good for 13th place, six shots off the lead. Henrik Stenson, Rickie Fowler, Patrick Reed and Martin Kaymer are all within five shots of the lead. It’s rare that a leaderboard is this loaded with big names.

Notes from the course:

Rory McIlroy drove the ball so long and so straight on both Thursday and Friday and yet he heads home after missing the cut. McIlroy was very blunt in regards to how bad his short game has gotten “I think if you had given anyone else in the field my tee shots this week, they would have been up near the top of the leaderboard. That just shows you how bad I was around the greens.” 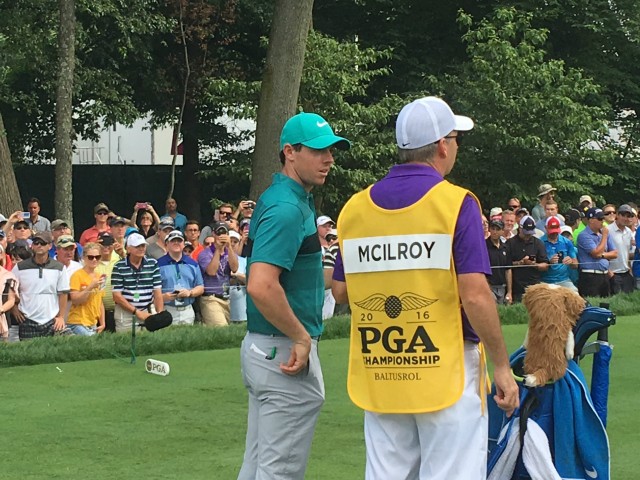 Phil Mickelson is the fan favorite around here, no question about it. He gets huge applause on every hole and is always appreciative of the fanfare. He had a rough start to his day after his tee shot on the first hole went out of bounds and off the course coming to rest somewhere in the neighborhood. Phil, who has honed his sense of humor over the years, summed up the debacle: “I think in the history of the PGA Championship, that’s the worst start of any player’s round. I’d have to look it up.”

John Daly is a national treasure. While warming up on the driving range he was smoking a cigarette. This is not that unusual as players will toss their cigarettes on the ground and then take their shot. But John Daly actually still has the cigarette in his mouth when he’s swinging. It’s impressive to watch. His outfit today was the ugliest possible color combination you could imagine: lime green golf shirt with orange/brown camouflage pants. 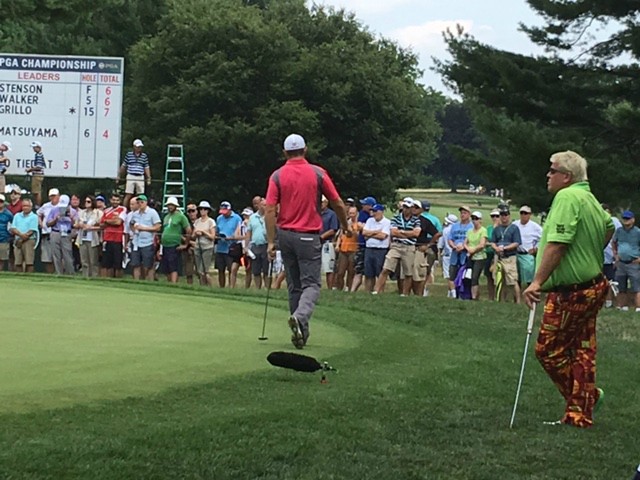 Josh Speight is a fine golfer but no Jordan Speith. The similarities in their names caused a lot of confusion as Josh was 7 over on Thursday and there were gasps from the crowd every time they showed his score.

Heard around the course: ”John Daly must have found his (lady) caddie on Tinder.” And after one of the many (unknown) PGA club pros hit a particularly bad shot on the 14th, ”And that’s why we don’t know your name.”