Buccaneers fans, overcome with joy, flooded the streets of their city after Tampa’s 31-9 victory over the Kansas City Chiefs.

However, the majority of them forgot their masks and social distancing protocols, and the mainstream media is here to remind them of that.

Tweets showing maskless, reveling fans began appearing soon after the game was over.

Fans have been rocking this tree back and forth for the last hour. This on South Howard in Soho. BE SAFE out there if you’re celebrating tonight. @FOX13News pic.twitter.com/p7kinGo09f

“It is a little frustrating because we have worked so hard,” Castor said during a Monday morning news conference. “At this point in dealing with COVID-19, there is a level of frustration when you see that.”

Castor had even gone so far as to issue executive orders mandating mask-wearing during all Super Bowl events, even those taking place outdoors.

Clearly, those orders were not followed. 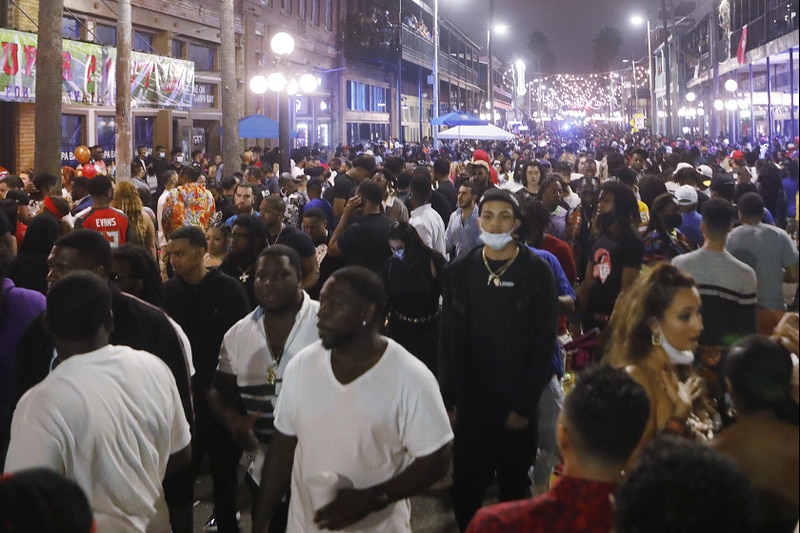 Dr. Anthony Fauci had warned against large Super Bowl parties and gatherings earlier in the week. But of course, people stopped listening to him a long time ago.

Is there a chance the Bucs celebration will turn into a “super-spreader” event? Sure, but if history is any guide, it’s unlikely. Notre Dame students were quickly chastised by the media and school administration for storming the field after the Irish’s victory over Clemson in November. However, no significant coronavirus outbreak occurred following that celebration.

The Black Lives Matter protests and riots in the aftermath of George Floyd’s death could certainly have been another super-spreader event. Though, testing and tracing efforts at those events were largely ignored or restricted at those events because the pandemic takes the day off when social justice is happening, apparently.

In any event, no one should is really in a position to judge the state of Florida when it comes to handling the coronavirus. Under the leadership of Governor Ron DeSantis, Florida has embraced far less restrictive mask and social distancing protocols and lags behind more restrictive states such as California, in infections and deaths.

Does California have more people than Texas and Florida? Sure. But, if lockdowns and severe social distancing were the answer, wouldn’t California’s numbers be better?