DeAndre Hopkins is not the only player who has publicly questioned the NFL’s policy on vaccines. With a handful of teams already in training camp and the rest to soon follow, the wave of backlash continued through the weekend against the NFL following Thursday’s memo announcing that players will be held accountable for any outbreaks among unvaccinated teammates.

Here is a roundup of the latest comments from players and coaches against the NFL’s policy:

After the NFL’s announcement Thursday, three-time All-Pro wide receiver DeAndre Hopkins posted on Twitter, “Never thought I would say this, but being put in a position to hurt my team because I don’t want to partake in the vaccine is making me question my future in the @NFL.” He then deleted the tweet and posted instead, “Freedom?”

Former Washington receiver Terrelle Pryor, who has not been on a roster since 2019, posted Saturday night in a now-deleted tweet, “Had a try outlined up. Said I can’t visit unless . . . I’m vaccinated! Now I’m torn between, tough decision,” NBC reported. 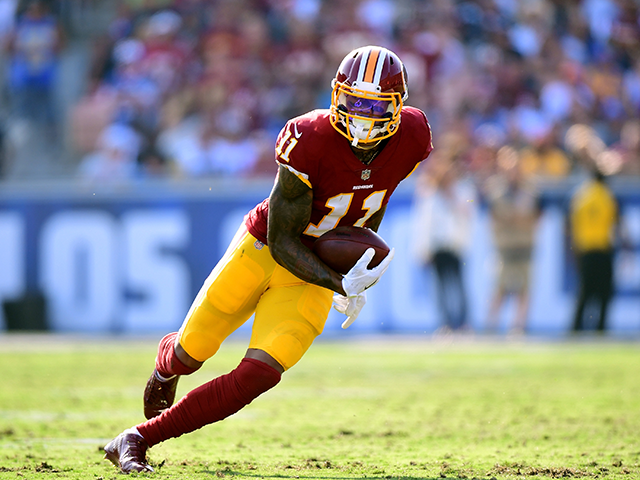 Terrelle Pryor #11 of the Washington Redskins runs after his catch during the game against the Los Angeles Rams at Los Angeles Memorial Coliseum on September 17, 2017, in Los Angeles, California. (Photo by Harry How/Getty Images)

Tampa Bay Buccaneers running back Leonard Fournette posted in a now-deleted tweet on Thursday, “Vaccine, I can not do it ……”

Add #Bucs RB Leonard Fournette to the list of players against getting the COVID-19 vaccine. pic.twitter.com/1IqlksESap

“I just don’t know too much about [the vaccine],” Fournette clarified during the first day of training camp Sunday, ESPN reported:

‘I’m going to talk to [team doctors], and just see what’s the best decision, for myself and for the team,’ Fournette said, adding that if he doesn’t get the vaccine, he’s prepared to undergo the far more restrictive COVID-19 unvaccinated player protocols that significantly impact team and social activities away from football.

I understand everybody’s opinion, and I think everybody has that right. We wouldn’t live in this country and we wouldn’t be in the position we’re in if that wasn’t the case. Obviously, we all have to do a better job of educating ourselves, of educating our neighbors just on this whole pandemic, this whole situation, the vaccine. 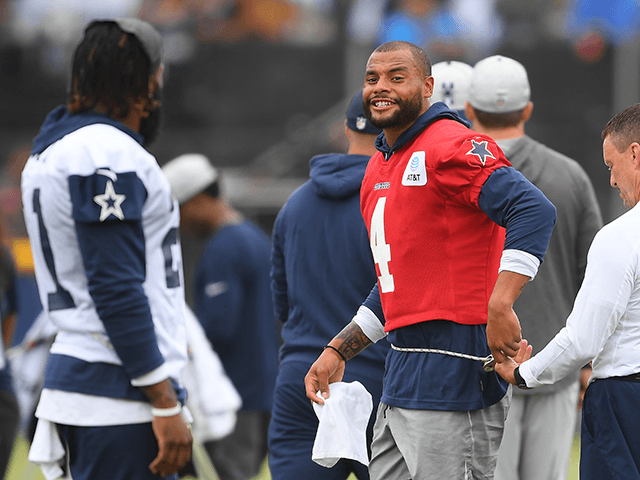 Running back Ezekiel Elliott #21 and quarterback Dak Prescott #4 of the Dallas Cowboys warm-up before the start of training camp at River Ridge Complex on July 24, 2021, in Oxnard, California. (Photo by Jayne Kamin-Oncea/Getty Images)

On Friday, Minnesota Vikings assistant coach Rick Dennison, one of the most highly reputed offensive minds in the game, reportedly parted ways with the Vikings after refusing to receive the coronavirus vaccine.

Another coach, New England co-offensive line coach Cole Popovich, will reportedly not return this season because of the league’s vaccine policy.

And another – and probably not the last: Patriots’ co-offensive line coach Cole Popovich won’t be with the team in 2021 in a decision related to the COVID-19 vaccine and NFL guidelines, according to @MikeReiss.

Los Angeles Rams cornerback Jalen Ramsey said, “The NFL is pressuring/ ‘influencing’ guys to get the vaccine. They are saying if there is an outbreak, the team will be penalized heavily. My point is no teammate of mine will feel that pressure from me,” on a Twitter post Thursday. Ramsey also posted that he knows “2 people right now who got the vaccine but are covid positive”:

Some of y’all clearly didn’t get what I’m saying here lol.. the NFL is pressuring/ “influencing” guys to get the vaccine. They are saying if there is an outbreak, the team will be penalized heavily. My point is no teammate of mine will feel that pressure from me because… https://t.co/odRnl7xUUZ