Sha’Carri Richardson, the U.S. track star expected to win gold in Tokyo but who missed the games due to a positive test for marijuana, made a disappointing return to competition Saturday finishing in dead last place at the Prefontaine Classic in Oregon.

Richardson has not competed since the Olympics, where she was disqualified for having THC show up in her blood test. She said she smoked weed to cope with the death of her mother.

Still, the 21-year-old sprinter was considered one of the fastest women in U.S. track and field. So, hopes were high for her to make a good showing in Oregon last weekend. It all came crashing down, though, when Richardson finished in last place with a time of 11.14 in the 100-meters.

Richardson was practically in last place from the second the starting gun popped. You can see her with her flowing blonde hair bringing up the rear from the start:

The Olympic champ does it again! @FastElaine snags the win with a 10.54 in the 100m!#PreClassic x #DiamondLeague

Ahead of the race, Richardson was eager to get back on the track, saying, “I’m just ready to come back, I’m coming back with the same energy I left the sport with, and I’m eager to bring even more.”

She even boasted a bit about her excellence when asked about how she feels about getting ready to compete against several women who did compete in Tokyo. 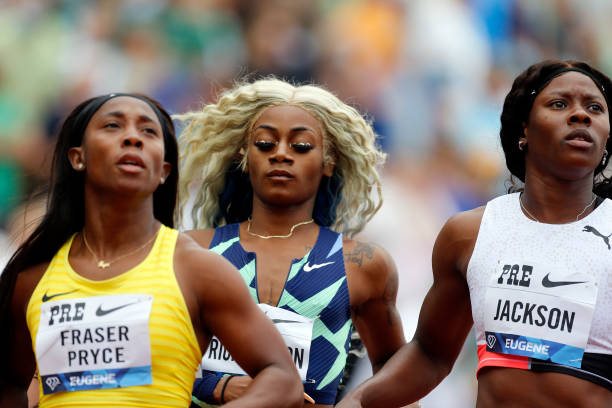 But after such a poor race, Richardson wisely pulled out of the 200-meter later that day.