Olympic gold medalist Simone Biles broke down in tears Wednesday as she testified about the sexual abuse she and hundreds of other gymnasts suffered at the hands of USA Gymnastics doctor Larry Nassar.

Appearing with fellow gymnasts McKayla Maroney, Aly Raisman, and Maggie Nichols before the Senate Judiciary Committee on Wednesday, Biles blasted not only Nassar but the “entire system” that time and again turned a blind eye to Nassar’s abusive behavior.

“To be clear, I blame Larry Nassar, and I also blame an entire system that enabled and perpetrated his abuse,” Biles said, fighting back tears. 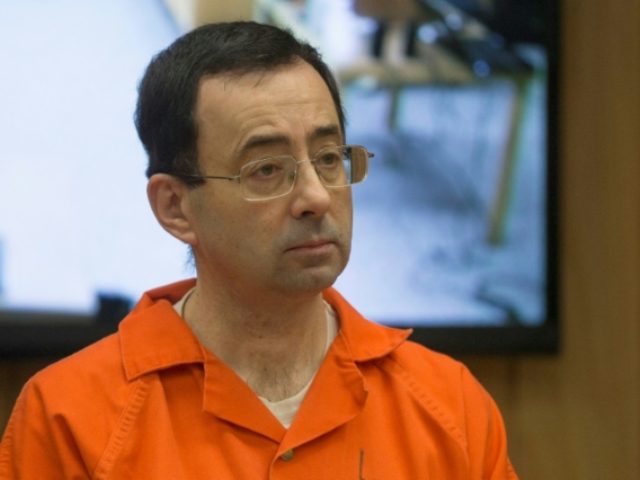 Biles insisted that USA Gymnastics, the U.S. Olympic & Paralympic Committee, and the FBI knew that young female gymnasts were being abused by USA Gymnastics’ official team doctor and did nothing to stop it.

“We suffered and continue to suffer because no one at FBI, [ USA Gymnastics] or the [United States Olympic and Paralympic Committee] did what was necessary to protect us,” Biles told the Senators gathered before her. “We have been failed, and we deserve answers. Nasser is where he belongs, but those who enabled him deserve to be held accountable. If they are not, I am convinced that this will continue to happen to others across Olympic sports.”

"I blame Larry Nassar, and I also blame an entire system that enabled and perpetrated his abuse. USA Gymnastics and US Olympic & Paralympic Committee knew that I was abused by their official team doctor" pic.twitter.com/Ghm3ueLwFM

In their own opening statements, each of the senators on the committee blasted Nassar as a “monster,” said his actions were “hideous,” and excoriated USA Gymnastics and the FBI for so badly mishandling the investigations into the charges of abuse.

In her testimony, McKayla Maroney said that she was shocked to discover that the FBI failed to fully investigate so many of the claims of sexual abuse. And she was aghast to learn that the FBI agents that did attend to her accusations made up “entirely false claims” about what she told them.

“They chose to lie about what I said and protect a serial child molester rather than protect not only me but countless others,” Maroney told the committee.

“What is the point of reporting abuse if our own FBI agents are going to take it upon themselves to bury that report in a drawer,” she added. “They had legal, legitimate evidence of child abuse and did nothing.”

In the fallout from the failed investigations, the FBI fired Indianapolis field office supervisory special agent Michael Langeman who the agency finally determined had utterly mishandled the investigation into Nassar’s abusive behavior. And in July, Justice Department Inspector General Michael Horowitz blasted Indianapolis agency Chief W. Jay Abbott for the failure of responding to the allegations “with the urgency that the allegations required.”

More than 70 young gymnasts aged 12 to 19 continued to suffer sexual abuse after the FBI’s failed investigation into the allegations.